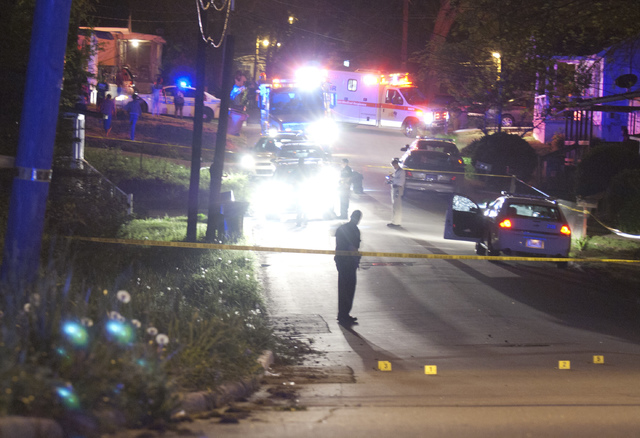 Police investigate a shooting in the 200 block of McGregor Street on April 15. The victim, Tony Kennedy, 21, was shot in the head and later died at an Atlanta hospital.

http://lagrangenews.com/wp-content/uploads/sites/37/2015/08/web1_WEB0414McGregorShootingRGB.jpgPolice investigate a shooting in the 200 block of McGregor Street on April 15. The victim, Tony Kennedy, 21, was shot in the head and later died at an Atlanta hospital.

Prosecutors allege Christopher Foster, 17, of McGregor Street; Cordarius Collier, 20, of Smoot Street; Tyler Dunson, 17, of Belk Street; and Cherise Newton, 21, of Murphy Avenue, all participated in the shooting of 21-year-old Tony Kennedy of McGregor Street on April 15 outside a home.

The indictment on five counts of aggravated assault and one count each of murder, malice murder and gang participation paves the way for the case to head to superior court.

On the evening of the shooting, police say Kennedy, 20-year-old Andre Bennett — who was later also shot in the leg at a gas station on Hamilton Road — and three other people were outside a home in the 200 block of McGregor Street at about 10 p.m.

Kennedy and Bennett were on the home’s front porch and the three others were near the street, Wynne said.

While the group was gathered in front of Foster’s mother’s home, the defendants allegedly drove a four-door Saturn sedan down East Fendig Street and parked it near the intersection of East Fendig and McGregor streets behind a wooded area. Three of the occupants — Foster, Collier and Dunson — allegedly exited the vehicle while Newton waited in the driver’s seat of her father’s Saturn.

A small, worn footpath cuts the corner of East Fendig and McGregor streets, roughly 65 yards from where Kennedy and the others were standing. That’s where police allege Foster brandished a .40 caliber handgun and Collier took out a 9 mm handgun and started firing indiscriminately toward the crowd.

The first 911 call came in at 9:49 p.m. When police arrived, they found Kennedy shot in the head a single time and about 20 shell casings littering the street. The Saturn sedan and the four suspects had fled and Kennedy was dying — although police say he wasn’t the intended target, Bennett was.

According to magistrate court testimony by Wynne, the Gangster Disciple street gang had issued a “kill on sight” order for Bennett because he cooperated with law enforcement in a previous investigation.

Kennedy was taken by ambulance to West Georgia Medical Center and later airlifted to an Atlanta-area hospital where he was pronounced dead at 7:30 a.m. the next day.

Foster, Collier and Dunson were arrested by police May 8 and have been held in jail since; Newton was arrested by U.S. Marshals in Newnan on July 29 — she was found at a community pool at The Columns at White Oak apartments on Lakeside Way. She is also being held in jail.

The case has been assigned to Superior Court Judge Travis Sakrison. Dates of future court appearances have not yet been set.