Troup looking for a quarterback 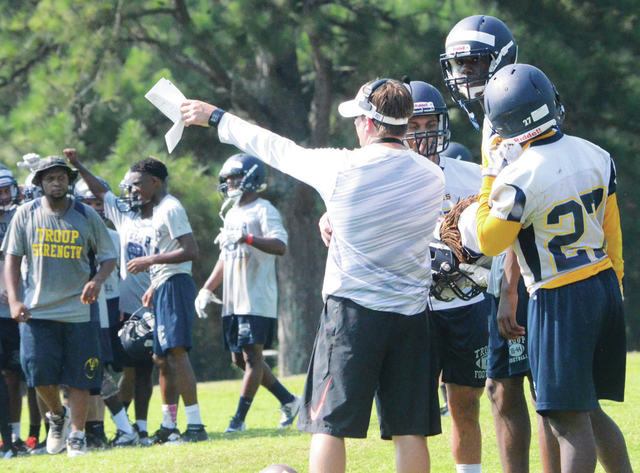 Troup’s offense gets ready to run a play during practice last week. Montez Crowe, Ken Truitt and Dexter Shealey have been taking the snaps at quarterback. Kevin Eckleberry | Daily News

http://lagrangenews.com/wp-content/uploads/sites/37/2015/08/web1_8-6-troup6.jpgTroup’s offense gets ready to run a play during practice last week. Montez Crowe, Ken Truitt and Dexter Shealey have been taking the snaps at quarterback. Kevin Eckleberry | Daily News Troup offensive coordinator Kelby Holt offers some instruction during practice. Holt has been busy getting the players familiar with a new offense. Kevin Eckleberry | Daily News

http://lagrangenews.com/wp-content/uploads/sites/37/2015/08/web1_8-6-troup5.jpgTroup offensive coordinator Kelby Holt offers some instruction during practice. Holt has been busy getting the players familiar with a new offense. Kevin Eckleberry | Daily News

LAGRANGE – Someone is going to be playing quarterback when the Troup Tigers open their season on Aug. 28 against LaGrange.

Who that player will be has yet to be determined.

“It’s still competition at quarterback,” Troup offensive coordinator Kelby Holt said. “There’s nobody who has made themselves the front-runner by any means. There’s competition every day.”

When Tanner Glisson was hired in May to be Troup’s new head coach, he brought in Holt to be the offensive coordinator.

During summer workouts and the first two weeks of preseason practice, Holt has been getting to know the offensive players, including the men vying to be the quarterback.

Troup’s starting quarterback for most of the past three seasons, Will Smith, has graduated, leaving the position to be filled.

Glisson said Montez Crowe, Ken Truitt and Dexter Shealey have been taking the snaps at quarterback during practice.

Shealey has the most playing experience among those three players, albeit as a running back.

“Montez Crowe he’s a sophomore, and he’s shown a lot of improvement. He’s done a great job,” Holt said. “Ken Truitt, he brings a lot to the table, just being an athlete. And Shealey, you can’t coach an arm like that. He slings the ball. Those three guys, they can play. And just coming out here and letting them compete every day, it’s good stuff.”

Holt said each player has done a lot of good things.

Whoever plays quarterback for Troup will be throwing the ball to an outstanding senior wide receiver in Tremayne Tolbert, who had a breakout junior season and was named to the all-Region 5-AAAA team.

“The receivers, they’ve been working hard,” Holt said. “We’ve got a good group.”

The Tigers also have some talented men who can carry the football, including Shealey, who had a breakout 2014 season.

Holt said the Tigers will feature an “up-tempo” offense that will be designed to keep defenses on their heels.

“We want to be very up-tempo,” Holt said. “We want to throw the ball around a lot, and we’re going to run the ball. It’s the old philosophy we’ll take what the defense gives us. That’s what everybody else says, but that’s what we’re going to do. Just try to keep people off guard and play really, really fast, and be in really good shape, and just let them play ball.”

Fans will get their first look at the offense, and at the three quarterbacks, when Troup hosts Spencer in a preseason game next week.

Troup will also play Upson-Lee in a preseason game before opening the season against LaGrange.

“We’re just trying to put the pieces together,” Holt said. “We’re trying to figure out what we’re going to be good at, and do it on Friday night. That’s the biggest thing.”