Grangers get plenty of time together 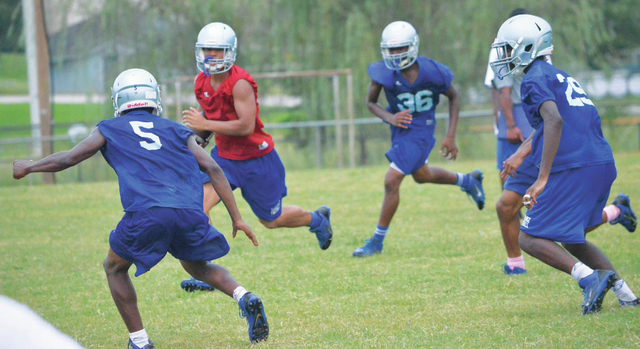 For the second straight year under head coach Dialleo Burks, LaGrange’s football players and coaches spent the weekend together at the Georgia Sheriffs’ Pineland camp in LaGrange.

It was a way for the team to not only get plenty of football-related work in, but for everyone to also spend a whole lot of time together.

The team spent Friday and Saturday night at the camp, and the whole team attended the morning service at the First Baptist Church on the Square on Sunday.

Burks said the hope is that the camp will help the players learn to have trust and faith in each other.

“If you don’t know who you’re playing beside, it’s tough to trust them,” Burks said. “I want to make sure we start from the ground up with these guys. The most important element is to trust your teammate. Know who your teammate is. Once you get that down pat, then we can play some football. We really enjoyed it.”

Burks said the weekend was also a positive experience for a coaching staff that has a handful of new faces this season.

After holding the required five conditioning practices last week, LaGrange held its first full-contact practice on Saturday at the camp.

LaGrange returned to its usual practice field at Granger Park on Monday, and the team will finish the week with an intra-squad scrimmage today at 5 p.m. at Granger Park.

LaGrange has a preseason game against Newnan next week, and it will open the season on Aug. 21 against Callaway.

“We want to go out next Friday (against Newnan) and see where we are, what holes we have, what we need to plug,” Burks said. “It’s good to go against somebody else.”

While the Newnan game doesn’t count, Burks said everyone will be taking it seriously.

“They’ll be keeping score,” Burks said. “When they blow that whistle, it’s football.”

The Grangers then turn their attention to Callaway, and they will play Troup in the second week of the season.

Those are two huge games against county rivals, but no matter what happens there’ll be plenty of season to go.

A year ago, LaGrange lost to Callaway and Troup, but it ended up making the playoffs as the third-place team in Region 1-AAAAA.

“We don’t want to hold one game higher than the other,” Burks said. “We’re going to play one week for what it is, and keep going step by step.”

During the first week, there was no contact, and teams were limited to two hours of practice time each day.

This week, there has been a mix of full-contact and non-contact drills, culminating with today’s scrimmage.

Burks said the team has strived to make the most of every minute of practice.

“That’s where it begins. It’s those little small details,” Burks said. “Anybody can get out there and quote, unquote practice. We want to practice in the right way, operate the same way as if we were playing a game.”