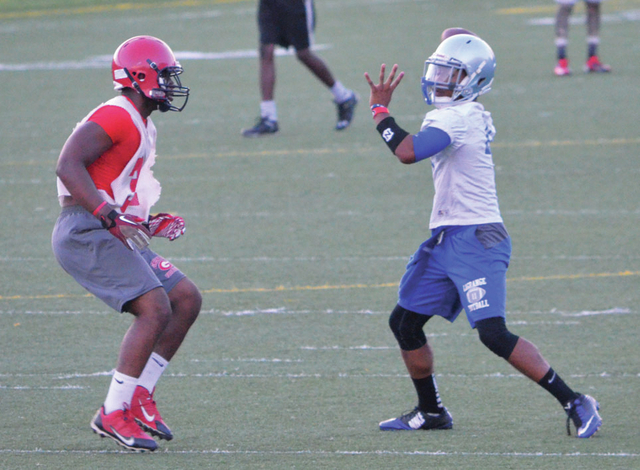 LAGRANGE – The LaGrange Grangers are two weeks away from their season opener, and the competition to see who will be the starting quarterback goes on.

Jay Floyd, LaGrange’s new offensive coordinator, has been getting a close look at the prospective quarterbacks for the past three months, and he said it’s a “three-way battle.”

Amad Ogletree was LaGrange’s starting quarterback last season, and he is in the mix to be in that spot again this year.

The other two men who are vying to be LaGrange’s quarterback are LaPerion Perry and Andrew Askew.

Perry took some snaps at quarterback last season, and he was also a dynamic wide receiver for the Grangers and a big-play kick returner as well.

“We’re having a three-way battle, and they’re all taking reps,” Floyd said. “They all do something a little bit different, some things better than the others. It’s really a tough decision when it comes down to it. We’re going to keep on letting them battle.”

The quarterbacks will be on the field today for an intra-squad scrimmage that begins at 5 p.m.

Next week, LaGrange will host Newnan in a preseason game, giving the quarterbacks a great opportunity to impress the coaches.

To this point, Floyd has only been able to see the quarterbacks in practice, and in the seven-on-seven competitions throughout the summer.

While the seven-on-sevens provide a lot of value, they don’t allow LaGrange’s quarterbacks to utilize their skill as runners.

“When you get into a seven-on-seven situation, they’re not worried about the quarterback running,” Floyd said. “We’re hoping for us, that’ll open up a whole new set of possibilities as far as the passing game. It makes it completely different.”

While the Grangers won’t be putting the ball in the air 40 times a game, Floyd said whoever ends up playing quarterback will be an effective passer.

LaGrange’s quarterback will have some talented wide receivers to throw the ball to, including Mike Hardy.

The Grangers also have a deep stable of running backs who will try to make up for the loss of 1,000-yard rusher Mon Denson, who is now at South Carolina.

Floyd got the first look as his offensive players during spring practice in May, and he said the offensive game plan has changed in the months since.

“It’s taken us a little while, for me to see personnel wise what we have,” Floyd said. “In the spring, we went one way, and after seeing the guys we started doing a couple of different things. I think we’ve finally settled on what we would be good at.”