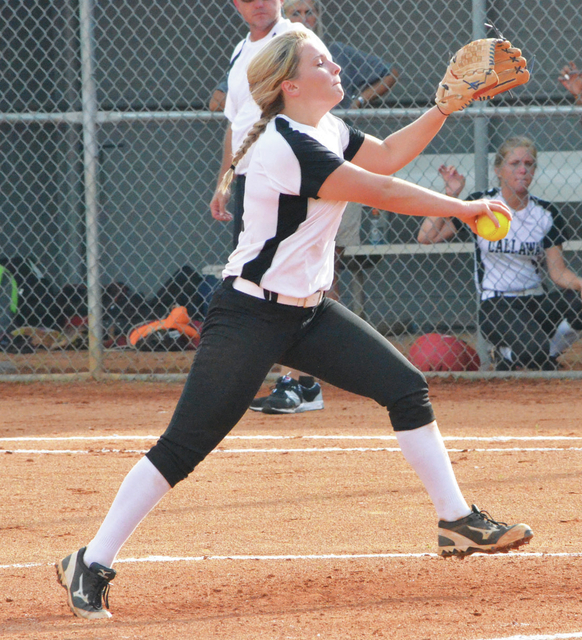 HOGANSVILLE – They came out swinging.

The LaGrange Lady Grangers opened a new softball season with a 13-5 victory over the home-standing Callaway Lady Cavaliers on Friday.

The Lady Grangers scored four runs in the top of the first inning to take a lead they wouldn’t relinquish.

“We were aggressive,” said Heath, an assistant to new head coach Dewey Lee. “Last year we took strikes, and today we came out swinging and made things happen, which is exciting.”

Another encouraging sign was the performance of pitcher McLain Skinner, who missed much of the 2014 season with a knee injury.

Skinner, wearing a knee brace for support, got the complete-game victory on Friday.

“She came out and she did her job,” Heath said. “That’s what we wanted.”

It was a disappointing start to the season for Callaway, but head coach Ashley Summerlin said it’s all part of the process.

Lauren Kuerzi led LaGrange’s offensive effort with four hits, including an RBI single that capped the scoring in the seventh inning.

Leadoff hitter Destiny Fitzpatrick had two hits and was on base three times, and she drove in two runs, and Leighton Parker and Skinner each had two RBIs.

Jessica Perkins had a pair of hits for Callaway with an RBI.

In the four-run first inning, Hannah Karcher got things started with a one-out single, and Kuerzi, Shaq Sutton, Miranda Hamer and Skinner followed with base hits.

Callaway answered with three runs in the bottom of the first.

Brittany Mitchell had an RBI double to put Callaway on the board, and Perkins added a run-scoring base hit to make it a 4-2 game.

Skylar Rice then reached on an error, allowing another run to score.

It remained a 4-3 game until the top of the third when LaGrange scored three more runs.

Kuerzi led off with a double, and she scored on an error after Sutton reached on a bunt single.

Callaway got one of those runs back in the fourth inning.

After Perkins doubled, Rice followed with a double of her own to make it a 7-4 game.

For LaGrange, Cassidy Creed had an RBI single in the fifth inning, and Fitzpatrick had a two-run double later in the inning to give LaGrange a 10-4 lead.

In a two-run sixth inning, Sutton walked and later scored on a wild pitch, and Hamer knocked in another run with a groundout, and the Lady Grangers led 12-4.

Oeisha Jenkins had an RBI groundout in the bottom of the sixth for Callaway, and Kuerzi capped the scoring with an RBI single in the top of the seventh.

Perkins got the start for Callaway and pitched the first six innings, and Jenkins threw the seventh inning.

“I thought Brittany did a good job behind the plate, and I thought Jessica really battled,” Summerlin said. “She gave up some hits in the first inning, but we didn’t help her. I thought she pitched well.”