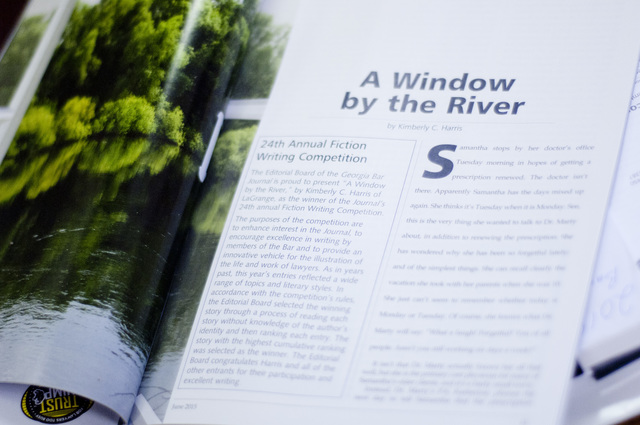 Kim Harris, a LaGrange attorney and winner of the State Bar of Georgia association’s 2015 fiction writing contest, reviews her story.

http://lagrangenews.com/wp-content/uploads/sites/37/2015/08/web1_WEB0809Author01.jpgKim Harris, a LaGrange attorney and winner of the State Bar of Georgia association’s 2015 fiction writing contest, reviews her story. LaGrange attorney Kim Harris’s story ‘A Window by the River’ won the State Bar of Georgia association’s 2015 fiction writing contest. It was published in the June edition of the association’s magazine.

http://lagrangenews.com/wp-content/uploads/sites/37/2015/08/web1_WEB0809Author02.jpgLaGrange attorney Kim Harris’s story ‘A Window by the River’ won the State Bar of Georgia association’s 2015 fiction writing contest. It was published in the June edition of the association’s magazine.

LaGRANGE — Over the years, local attorney Kim Harris as written a lot.

That fear of rejection turned out to be no problem when she was notified she’d won the statewide contest.

“No one was more surprised than I when I found out I’d won the competition,” she said.

Harris’s story, “A Window by the River,” was published in the June edition of the association’s trade magazine and sent to members across the state.

“It was fun,” Harris said. “It’s brought me back into contact with some of my colleagues around the state who read the article and saw my name.”

The contest’s organizers encouraged entrants to write about a topic that’s closely related to their field of law, said Harris, who specializes in elder law.

“The story is about an individual who used to be a professional, a legal professional — was an elder law attorney, who is now residing herself in an assisted living community and reliving through flashbacks of some people and events that happened in her life,” she said.

“They (the flashbacks) are all very real to her as she is experiencing them,” Harris continued. “Events of when she left her hometown and drove to a nearby town to explore finding a new doctors office, or the time when she made a trip to explore the possibility of finding a new home to retire to. She’s reliving this as if it’s present day, not remembering that she doesn’t practice law any more or live in her own home, that she’s living in an assisted living community.”

As an elder law attorney, Harris focuses on issues that people and families face as a loved one grows older. Those issues sometimes include being diagnosed with a disease like Alzheimer’s that can lead to mental incapacity.

Harris said for her, the issues are not only practical, but very real for her in her daily work.

“What drew me to that story line is because that’s what I deal with five days a week — families in this crisis,” Harris said. “(I see) children who are in their 60s dealing with parents in their 80s who say their parents are having some issues and they’re not sure what to do.

“Or, an 80 year old who comes in and says they’ve just come from their doctor and been diagnosed with early-onset dementia and I need to make some plans while I’m still capable.”

Harris said understanding and coping with a diagnosis like Alzheimer’s can be a challenge not only for caregivers, but the patients as well.

“The hardest thing for the caregiver child or spouse is to understand and cope with the behavioral changes that are coming and accept that it’s the disease that’s about to change their loved one,” she said. “It’s very difficult not to take things personally when your loved ones personality begins to change.

“For people who’ve just received the diagnosis, the thing that they have to understand is to plan while they have capacity and they can put their thoughts, wishes and desires on paper, and also they have to allow people in their lives in take over. They have to give up control … that’s a difficult thing.”