Chase for a championship rolls on 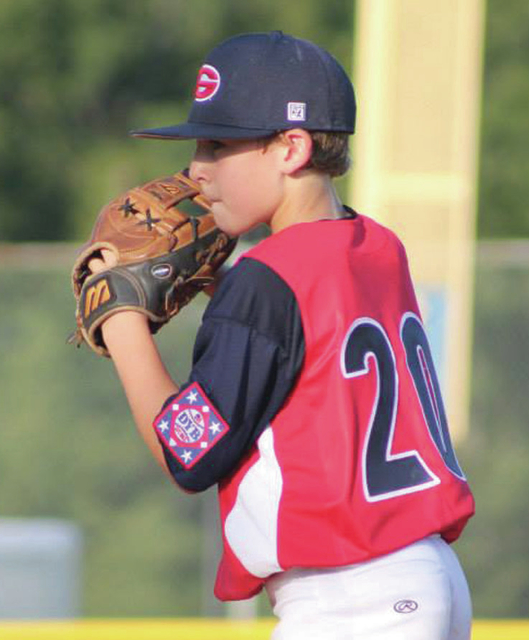 Georgia’s Ty Medders is congratulated by coach Chip Medders and his teammates after hitting a game-ending home run in Saturday’s 12-0 victory over Virginia. Photo by Carla Esposito

http://lagrangenews.com/wp-content/uploads/sites/37/2015/08/web1_8-10-national3.jpgGeorgia’s Ty Medders is congratulated by coach Chip Medders and his teammates after hitting a game-ending home run in Saturday’s 12-0 victory over Virginia. Photo by Carla Esposito Georgia’s Trey Cook was the winning pitcher in Saturday’s 12-0 win over Virginia, and he had the save in Sunday’s 5-2 victory over Mississippi. Photo by Carla Esposito

http://lagrangenews.com/wp-content/uploads/sites/37/2015/08/web1_8-10-cook.jpgGeorgia’s Trey Cook was the winning pitcher in Saturday’s 12-0 win over Virginia, and he had the save in Sunday’s 5-2 victory over Mississippi. Photo by Carla Esposito Georgia’s Colton Esposito was the winning pitcher in Sunday’s 5-2 win over Mississippi. Photo by Carla Esposito

http://lagrangenews.com/wp-content/uploads/sites/37/2015/08/web1_8-10-national5.jpgGeorgia’s Colton Esposito was the winning pitcher in Sunday’s 5-2 win over Mississippi. Photo by Carla Esposito

LEXINGTON, S.C. – There hasn’t been a whole lot of suspense for the Troup National all-stars this summer.

The team cruised through the district and state tournaments with a 10-0 record, and it outscored its opponents 146-20 in those games.

The story was much the same on Saturday on the opening day of the Dixie Youth Baseball 9-10-year-old World Series.

Facing Virginia, Troup National, or Team Georgia as it is now called, rolled to a 12-0 victory to move into the winner’s bracket.

Things figured to be much more difficult on Sunday against a strong Mississippi team, and Georgia did indeed find itself in a dogfight.

Georgia found a way, though.

After falling behind 2-0, Georgia rallied to tie it with a pair of runs in the third inning before taking the lead with three runs in the sixth.

Trailing by three runs, Mississippi had the bases loaded in the bottom of the sixth, but Georgia reliever Trey Cook got a pair of strikeouts to end the suspense, sending Georgia to a big 5-2 victory.

Georgia head coach Danny Swann said the victory was a testament to the iron will of the players.

“Our kids have such resolve, that they wouldn’t allow themselves to get beat tonight,” Swann said. “They just kept fighting, and kept battling, and doing the little things right.”

Even when Mississippi scored two unearned runs in the second inning to take the lead, Swann said the players never had any doubt.

“It’s just amazing to see that they never quit,” he said. “All 12 of them had a fire tonight. They were screaming in the dugout. They wanted that game so bad.”

It was a 2-2 game when Georgia came to the plate in the top of the sixth.

Jesse Swann got things started with a walk, and Colton Esposito followed with a base hit.

Next up was Devon Murphy, and the Mississippi right-fielder was unable to come up with a flyball, allowing two runs to score, and Georgia had a 4-2 lead.

Ty Medders then grounded out to drive in another run, and Georgia was ahead 5-2.

Mississippi threatened in the bottom of the sixth.

With one out and two runners on, Cook entered the game in relief of Esposito.

The left-handed Cook walked the first batter he faced, and Mississippi had the bases loaded, and the winning run was at the plate.

Cook was up to the challenge.

He struck out the final two batters he faced to preserve the victory.

Murphy got the start for Georgia and worked the first two innings, and Esposito came into the game to start the third inning and he remained in the game until Cook got the call.

It was a daunting challenge for Cook, who had to face some of Mississippi’s best hitters.

“That was the meat of their order. That wasn’t the bottom,” Swann said. “He came in and struggled for a few minutes, but he doesn’t quit. It doesn’t matter what the situation is, he will never, ever give in to a hitter. And Esposito doesn’t either. And Devon did a great job starting the game.”

Trailing 2-0, Georgia tied it with a pair of runs in the top of the third.

C.J. Stephens led off with a single, and two batters later, Seth Stargell walked to put two base runners on.

After Stephens and Stargell each moved up a base on a double steal, Preston Pressley’s infield single drove in Georgia’s first run.

Swann then knotted the score at 2-2 with a double, and that’s the way it remained until the final inning.

In Saturday’s game, Georgia made easy work of Virginia.

Georgia was leading 9-0 when Medders delivered a three-run home run to end the game because of the run rule.

Cook started and was the winning pitcher, and Esposito finished things off on the mound.