Dozens join in Journey for Justice march through Troup County 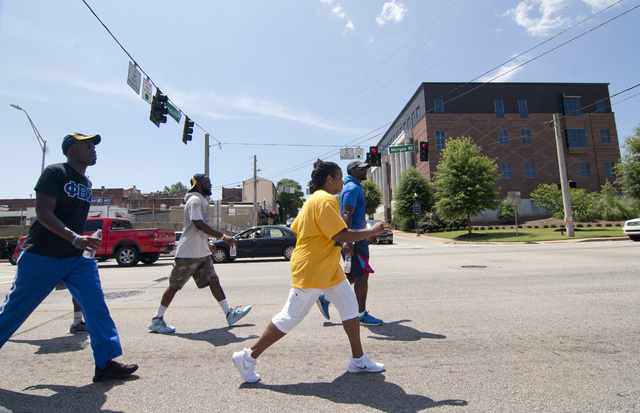 A team of marchers with the NAACP’s Journey for Justice pass the intersection of Morgan and Greenville streets on Saturday. More than 20 people from across the country took part in the march Saturday, with marchers rotating in relay-type fashion.

http://lagrangenews.com/wp-content/uploads/sites/37/2015/08/web1_WEBTylerNAACP062.jpgA team of marchers with the NAACP’s Journey for Justice pass the intersection of Morgan and Greenville streets on Saturday. More than 20 people from across the country took part in the march Saturday, with marchers rotating in relay-type fashion.

LaGRANGE — Walkers with the Journey for Justice stepped off bright and early Saturday morning in West Point at the Georgia-Alabama line with a bigger group than expected.

Folks from across the state of Georgia joined the NAACP on their quest to bring more awareness to perceived deficiencies in the state and national economic, educational, financial and judicial systems, plus changes to the voting rights act.

While the hot August sun beat down from above, and steam from the pavement rose up to meet their feet, walkers marched to their own beat — and for their own reasons.

“I’m walking for peace, happiness and the American way,” said Cleveland Jeter, a marcher from Carrollton.

Melinda Hendricks also came down from Carrollton to join the Journey for Justice and march for peace.

”I am walking for my grandmother and her grandmother, my family, sister, grandchildren, myself and everyone today,” she explained. “If I have to keep going, I’m going to keep going on … right on.”

Some participants represented the Jews for Equal Justice organization and were a part of the Union for Reform Judaism. They marched with the NAACP carrying the Torah, starting in Selma, Alabama.

“This march is amazing, even on a day like this when it’s incredibly hot outside. It’s completely worth it,” said a woman who would only identify herself as Mary from Peachtree City. “There are 150 rabbis from across the country that will be coming to carry the Torah for a stretch of the Journey for Justice. This Torah comes from a synagogue in Chicago and it’s being handed from rabbi to rabbi each day. This Torah will make it the entire way from Selma to Washington, D.C.”

Xaiver Jennings, 24, is a student at the University of West Georgia and was representing his fraternity Phi Beta Sigma.

Sarah Boddy just joined the NAACP as a member a few months ago. She said once she learned the reasons behind the march and the organization’s determination to make a difference, she too made the commitment to join them. Boddy got up at 6 a.m. and drove to meet the Journey for Justice walkers just to march beside them for a few hours on Saturday.

“To be in a group of people so dedicated and so conscious of what is really going on in our country, it is so incredibly moving, that I keep getting overwhelmed by the depth of commitment and brilliance of the people that are putting this on and walking together,” she said.

Anthony Boston, 19, came from the Bronx, New York, to assist the NAACP with the Justice for Journey march. He is part of the logistics team that travels along the march routes handing out cold water and assisting walkers as needed.

Boston said being on this adventure with the group in the south has been an eye opening experience for him.

“It’s a culture shock, I would definitely say … people driving around with Confederate flags sticking out of their cars,” he described. “It doesn’t makes me uncomfortable in a way … and we’ve been stared at too. It’s crazy.”

But Boddy said walkers have been inspired too.

“We had a man stop his car, pull over and stand and salute the flag that we’re carrying,” she explained. “One of the men who is the organizers of this … said ‘Oh, that’s the first time that’s happened.’ That was a really lovely moment. So largely, it’s been heartwarming.”

As the walkers wound their way down Highway 29 into the heart of downtown LaGrange and the Square, they proudly held their heads high, not being defeated by the heat nor the haters. You could hear them sing:

“This little light of mine, I’m gonna let it shine,”

The Journey for Justice will host its last teach-in in Troup County at the First United Methodist Church of LaGrange, 401 Broad St., at 7 p.m. The planned topic is legislation.

Anyone wanting more information can visit www.naacp.org, and you can follow their journey on twitter at #justicesummer.