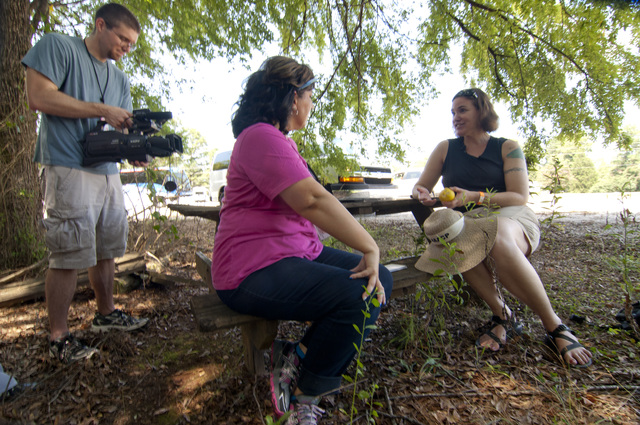 Daily News reporter Melanie Ruberti, center, interviews Sarah Boddy of Carrollton, a marcher with the NAACP’s Journey for Justice, on Saturday at Grace Baptist Church on West Point Road as editor Matthew Strother records the conversation with a video camera.

http://lagrangenews.com/wp-content/uploads/sites/37/2015/08/web1_WEBTylerNAACP10.jpgDaily News reporter Melanie Ruberti, center, interviews Sarah Boddy of Carrollton, a marcher with the NAACP’s Journey for Justice, on Saturday at Grace Baptist Church on West Point Road as editor Matthew Strother records the conversation with a video camera.

LaGRANGE — When the NAACP’s Journey for Justice came to Troup County on Friday, its organizers knew they’d attract some attention.

As the group of marchers came down West Point Road on Saturday, passing motorists waved, honked their horns and smiled at the yellow-shirted walkers. Some drivers looked on with confused expressions and others simply kept driving.

The reception was mixed, but nowhere were the comments more pointed than on a Facebook post on Friday by the Daily News showing a video of the marchers arriving.

“This is a bunch of bull,” “Nice day to fly my Confederate Flag,” and “I (just) can’t believe some of these comments,” are just a sampling of the 32 comments posted by Sunday evening.

The comment that received the most “likes” — 10 of them — by Sunday evening scolded other commenters for “being so negative … this is supposed to be America and everybody should have equal rights … .”

The Daily News asked a few of the marchers, including the Georgia statewide NAACP president, Francys Johnson, to respond to some of the more critical posts.

One commenter compared the NAACP to the Ku Klux Klan. “… They are equal trouble, but the NAACP has (moved) ahead and stirs up trouble almost daily,” the author of the comment wrote.

“The NAACP motto is to help ‘the least of ours’ and my definition of the ‘least of ours’ is helping those who do not have a voice for themselves, or who are afraid to speak for themselves,” Johnson responded. “We are an inclusive organization and not an exclusive organization, like the one you (the Facebook commenter) referred to. Those organizations are sometimes very exclusive and not very inclusive. So I would share with those organizations who have something negative to say, is to come join us and be apart of the process and apart of the solution and not create a problem. Be inclusive and not exclusive.”

The marchers themselves were a diverse group on Saturday, with people from different ethnicities, home states and faiths coming together for the 20-mile leg of the journey.

Carrollton resident Sarah Boddy, one of the marchers who is white, was nearly at a loss for words when the Daily News showed her some of the comments people had left.

“So what I hear there is just a real, deep refusal to acknowledge the systemically racist society that we live in,” she said. “So when we talk about we talk about racism from a systemic perspective … it’s not an interpersonal matter … it’s a matter of all the systems that are in place in which we all try to live our lives: the education system, the justice system, the financial system, the banking system. Little nuances there, the banking system, the lending system, all of those systems were originally set up by and for and to the advantage of white people and they continue to serve white people better, in terms of outcomes.”

Boddy said that she feels like she’s become more aware of what she called systemic racism in the United States and because of her awareness, now can’t simply look away and ignore it.

To read some of the comments left on our Facebook post, visit www.facebook.com/lagrangedailynews and find a video posted Friday.