Season getting close for Cougars 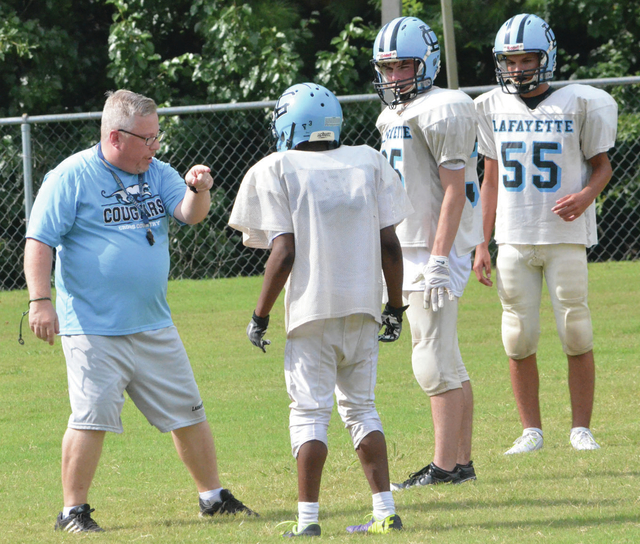 The Lafayette Christian School Cougars work on the kick return game during practice on Friday. The Cougars will open their season on Aug. 21. Kevin Eckleberry | Daily News LAGRANGE – These are good times for the Lafayette Christian School football program.

The Cougars have reached the semifinals of the Georgia Independent Christian Athletic Association state tournament the past two years, and they set a school record for wins during the 2014 season.

The Cougars will try to keep the good times rolling this year with a new person calling the shots.

Nate Shaw, the assistant coach the past few years under Nick Nehring, will be the head coach when the Cougars open their season on Aug. 21 against Appling Christian Academy.

Nehring has remained on the staff, and he and Glenn Quiggle will be the offensive and defensive coordinators.

On Friday, which was the first day of school at Lafayette Christian, the Cougars wrapped up their second full week of practice.

“This is the first day of school, so it’s good to get back in a rhythm,” Shaw said.

Although the Cougars lost some key players from last year’s team, Shaw said the team is well-positioned to put together another exceptional season.

“We like what we have this year,” Shaw said. “We’ll just keep our fingers crossed, keep the injury bug out of the way.”

Shaw said a strength of the team is the leadership provided by the seniors.

“Our thing is, we have some senior leadership, and some kids that are motivated,” Shaw said. “These kids, they have ideas, and they have input, and they want to take ownership.”

During their first week of practice, the Cougars held a camp on the Lafayette Christian School campus.

The players spent the night at the school, and they held a couple of practices each day.

“It’s good to bring them in here,” Shaw said. “You can do super-intensive stuff, and just get in shape. It builds the team, and you just have a good time. It was good.”

Shaw said the numbers have been great so far.

He said a few players decided to leave the team during the camp week, but there are still more than 20 men on the roster.