Another thrilling win for Georgia 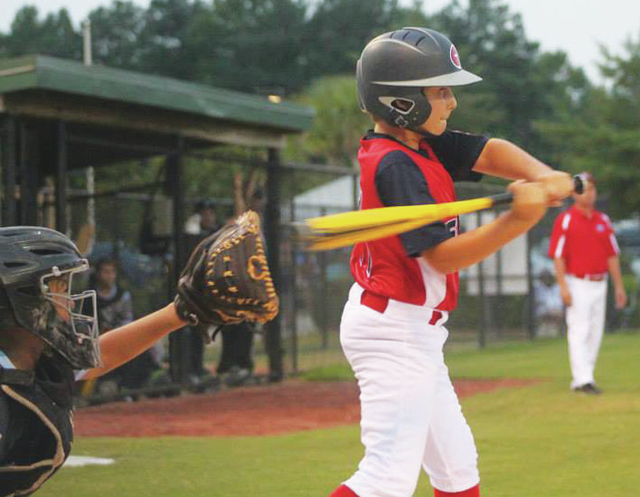 Team Georgia improved to 3-0 with a 5-4 victory over Florida on Monday in the Dixie Youth Baseball World Series in Lexington, S.C. Photo by Carla Esposito

http://lagrangenews.com/wp-content/uploads/sites/37/2015/08/web1_8-11-georgia3.jpgTeam Georgia improved to 3-0 with a 5-4 victory over Florida on Monday in the Dixie Youth Baseball World Series in Lexington, S.C. Photo by Carla Esposito Georgia’s Ty Medders was the starting pitcher in Monday’s game and he threw into the fourth inning. Photo by Carla Esposito

http://lagrangenews.com/wp-content/uploads/sites/37/2015/08/web1_8-11-georgia1.jpgGeorgia’s Ty Medders was the starting pitcher in Monday’s game and he threw into the fourth inning. Photo by Carla Esposito LEXINGTON, S.C. – Thanks to some more final-inning magic, Georgia is one step closer to a championship.

A day later, Georgia found itself in a tie game against Florida when it came to the plate in the bottom of the sixth inning.

Once again, Georgia found a way to get it done.

With the bases loaded, C.J. Stephens was hit by a pitch to drive in the winning run, and Georgia walked away with a 5-4 victory.

Georgia improved to 3-0, and it will face Alabama in a winner’s bracket game today at 8 p.m.

If Georgia wins that game, it would play again on Wednesday at 8 p.m. with a chance to earn a spot in Thursday’s championship game.

Florida was trailing when it scored a run in the top of the sixth inning to deadlock the score at 4-4.

Georgia pitcher Trey Cook got a groundout to end the top of the sixth, and Florida left the bases loaded.

Ty Medders got the bottom of the sixth started with a walk, and after Cook reached on a fielder’s choice, Trevor Booton’s hit put runners on second and third.

Cole Garner was intentionally walked to load the bases, bringing Stephens to the plate with one out.

Stephens stood in the box and was hit by a pitch, and Cook trotted home with the winning run.

Cook, who entered the game in the top of the fourth and his team trailing 3-1, was the winning pitcher.

Cook also got the win in Saturday’s 12-0 win over Virginia, and he recorded the save in Sunday’s 5-2 win over Mississippi.

Florida and Georgia both scored a run in the first inning.

In the bottom of the first, Colton Esposito and Devon Murphy each singled, and Medders followed with a base hit to drive in the tying run.

Florida took the lead with a two-run home run in the top of the fourth, and Cook came into the game in relief of Medders, the starting pitcher.

Florida got runners on second and third against Cook, but the left-handed pitcher got out of the jam without any more runs scoring.

Georgia got both of those runs back in the bottom of the fourth.

Esposito led off with a single, and Medders reached on a one-out walk, putting runners on first and second.

Cook and Trevor Booton followed with back-to-back RBI singles, and the game was tied at 3-3.

That’s the way it remained until Florida scored a run in the top of the sixth, despite not getting a hit.

Georgia shrugged that off and won the game and became one of just two unbeaten teams in the tournament.

Georgia improved to 13-0 in tournament play this summer after going 10-0 in the district and state tournaments combined.