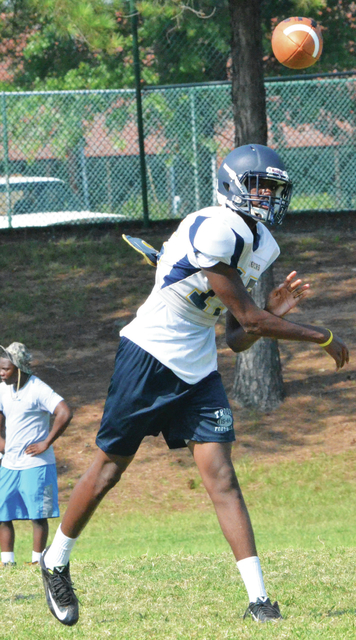 The Troup Tigers run a play during practice on Monday as they prepare for Thursday’s preseason game against Spencer. Kevin Eckleberry | Daily News

http://lagrangenews.com/wp-content/uploads/sites/37/2015/08/web1_8-11-troup111.jpgThe Troup Tigers run a play during practice on Monday as they prepare for Thursday’s preseason game against Spencer. Kevin Eckleberry | Daily News Troup’s defensive players participate in a drill during Monday’s practice session. Troup will have two preseason games before opening the season on Aug. 28 against LaGrange. Kevin Eckleberry | Daily News

http://lagrangenews.com/wp-content/uploads/sites/37/2015/08/web1_8-11-troup91.jpgTroup’s defensive players participate in a drill during Monday’s practice session. Troup will have two preseason games before opening the season on Aug. 28 against LaGrange. Kevin Eckleberry | Daily News Quarterback Montez Crowe and the Troup Tigers will be at Callaway Stadium on Thursday for a preseason game against Spencer. Kevin Eckleberry | Daily News

http://lagrangenews.com/wp-content/uploads/sites/37/2015/08/web1_8-11-troup71.jpgQuarterback Montez Crowe and the Troup Tigers will be at Callaway Stadium on Thursday for a preseason game against Spencer. Kevin Eckleberry | Daily News

The Troup Tigers won’t play their first official game until Aug. 28, but they’ll be on the field this week for the first of two preseason games.

Troup will host Spencer on Thursday at 7 p.m., and it will be back home on Aug. 20 for another preseason game against Upson-Lee.

Troup will then jump into a new season with the annual showdown against the rival LaGrange Grangers.

“We’re excited about this Thursday,” said Tanner Glisson, Troup’s first-year head coach. “We want to see where we are.”

It has been a cram course for the players during the first two-plus weeks of preseason practice.

Glisson was hired in late May, and he didn’t begin working with the players until the start of the summer program in June.

Glisson, who was the Manchester head coach in 2013 and 2014, didn’t even see his players in full pads until the first full-contact practice last week.

“Right now, it’s a blessing,” Glisson said of having the two preseason games. “If I had my choice, I’d of rather had spring practice. But it’s not a bad trade-off.”

The players have not only been learning a different system, but they’ve been adjusting to a new head coach, as well as a handful of new assistant coaches.

“If you’re an established program, you ought to beat us right now,” Glisson said. “We’re in the very early stages of this. It’s going to continue to improve, but it’s going to be tough on us to go against the big dogs where we are currently. But that’s OK. We’re going to make up as much time as we can in as fast amount of time as we can.”

Glisson said it has been helpful that the players have been so receptive to what he and the other coaches have been trying to teach them.

While Glisson acknowledges there will likely be some growing pains, he said “the potential here is tremendous.”

“Hopefully you’re going to see a team that looks dramatically different in week nine and 10 than it does in week one,” Glisson said. “I don’t think everybody can say that. All the coaches say they want to get better as the year goes along, but some people’s ceiling isn’t quite as high as ours is this year. Our ceiling is extremely high just because of where we are in the process.”

The Tigers went 3-7 last season, although they did beat LaGrange and Callaway to capture the county championship.

The 2014 team was a senior-heavy one, so there’ll be a lot of new faces in the lineup on Thursday.

Running backs Mess Bonner and Camren Russell also got a lot of playing time last season and were effective when called upon.

One of the players that needs to replaced is quarterback Will Smith, who was the starter for most of the past three seasons.

Glisson said junior Ken Truitt and sophomore Montez Crowe are competing to be the quarterback in Troup’s fast-paced offense, and both of those players will get plenty of playing time against Spencer.

Glisson said Truitt has the potential to keep playing quarterback beyond high school.

“He’s got the chance to go play big-time,” Glisson said. “He can play. He’s got that little burst you can’t teach.”

Glisson said Truitt and Crowe are part of an offense that has plenty of play-makers.

“Anywhere you look offensively, you’ve got some weapons,” Glisson said.

That is really noticeable at the running-back position with Shealey, Bonner, Russell and some other talented players capable of doing big things.

One strength of Troup’s team this season could be its depth.

Glisson said there are about 120 players on the roster, and that includes a large group of 50 freshmen.

Glisson said nearly everyone on the team, with a few exceptions, will be dressed and ready to go Thursday.

“We’ll dress everybody, all 120,” Glisson said. “There are a couple of guys that won’t play (Thursday) for team violations. It hasn’t been anything that has happened at our place. It happened in the community. But we’ve got to learn that there’s no distinction between the two.”

Glisson said once the regular season comes around, about 40 players will get most of the playing time.

Chase for a championship rolls on