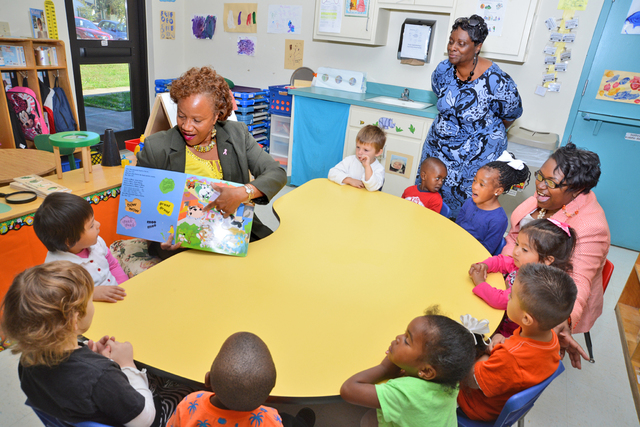 Edna Foster, executive director of Community Action for Improvement, reads to a group of Head Start students during the 2014-15 school year. CAFI this year lost its grant to administer the Head Start program, which will now be administered locally by a private company.

http://lagrangenews.com/wp-content/uploads/sites/37/2015/08/web1_WEB0811CAFI.jpgEdna Foster, executive director of Community Action for Improvement, reads to a group of Head Start students during the 2014-15 school year. CAFI this year lost its grant to administer the Head Start program, which will now be administered locally by a private company.

LaGRANGE — A LaGrange-based nonprofit no longer receives a federal grant to fund free day-care centers for low-income families. Instead, the government earlier this year awarded $9 million to a for-profit company.

Community Action for Improvement, or CAFI, operated the federally funded day-care program Head Start in Troup and five other West Georgia counties until July, according to Edna Foster, the nonprofit’s executive director.

Earlier this year, the division of the U.S. Department of Health and Human Services that oversees Head Start announced Childcare Network of Georgia, part of Childcare Network, the fourth largest for-profit day-care company in North America, would receive the grant. The network will also acquire some assets purchased for Head Start by CAFI using previous grants.

In response, CAFI readied to shutter 10 of its centers and in June announced plans to lay off about 200 of its nearly 300 employees, according to filings by CAFI with the Georgia Economic Development Department. The nonprofit employed 296 people in 2013, IRS filings show. It served about 1,100 children in its 13 day care centers across West Georgia.

Childcare Network of Georgia now replaces CAFI as the provider of the free Head Start program, but CAFI will continue to operate its other existing services, such as food and energy assistance to low-income clients; those services are paid for using different grants and donations.

CAFI is attempting to operate a limited number of child care centers, now on a fee-for-service basis — one each in LaGrange, Newnan and Carrollton, Foster said. A week of day care at CAFI’s centers now costs $85 for infants and $80 for toddlers, Foster said.

Changes in the law

The federal Head Start initiative was established by Congress in an early form in 1965 after President Lyndon B. Johnson declared the War on Poverty during his state of the union address of 1964. Today, the program has expanded from its original eight-week summer camp model in 1966 to provide full school year, no-cost child care for children who are below elementary school age and living at or below the federal poverty line — today, $24,250 in annual income for a family of four.

Its counterpart, Early Head Start, is also funded by the Head Start grant and provides care for children under the age of 3. Pregnant women are also eligible for Early Head Start and may be provided assistance in preparing for motherhood.

Changes to the grant came in 2007 when Congress revised how the money was awarded. As part of the revision, “Congress directed the Department of Health and Human Services to convert continuous Head Start grants to five-year grants,” according to a May 26 letter obtained by the Daily News from Mark H. Greenburg, acting assistant secretary for the Administration for Children and Families, to U.S. Sen. Johnny Isakson.

Additionally, the changes required Head Start grantees that did not meet certain quality benchmarks to compete for renewed funding. On Oct. 3, 2012, the Administration for Children and Families, a division of HHS that oversees the Office of Head Start, notified CAFI that a July 11, 2012, ACF review of the nonprofit turned up enough deficiencies to trigger mandated grant competition.

Deficiencies and a guilty plea

One deficiency referenced by the review happened Jan. 31, 2012, at Haralson CAFI Head Start on Magnolia Road near Senoia. A teacher’s assistant there claimed she found a student hiding under a blanket during nap time. The rest of the class — 11 children — were outside on the playground with another employee and two students remained inside with the assistant. The assistant initially said she found the child bleeding when she pulled a blanket from atop his head, according to a December 2012 review by the ACF.

The teacher’s assistant was indicted by a Coweta County grand jury in September 2012 on charges of cruelty to children in the first degree but pleaded guilty to a lesser charge of second-degree child cruelty in October 2012, according to Kevin McMurray, a senior prosecutor with the Coweta Judicial Circuit District Attorney’s Office. The teacher’s assistant was sentenced to two years in prison, followed by eight years of probation, McMurray said.

A second incident occurred Feb. 22, 2012, at a CAFI Head Start center in Franklin. In that instance, a child was left unattended and unsupervised on a playground for roughly 20 minutes, according to the ACF overview. When the child’s grandmother came to pick him up at the center, employees told her the boy’s mother had already picked him up. The child was later found hiding in a tunneled play structure after the employees determined the mother had not picked up the boy.

CAFI submitted its grant proposal to the ACF’s Office of Head Start on Nov. 20, 2014 — four days before the deadline.

In a July 7 letter earlier this year from the ACF to current CAFI board president Freddie Hines, the administration reviewed its criteria and reasoning behind denying CAFI’s grant request.

“A panel of non-federal experts who have broad experience in the subject areas covered by the announcement carefully reviewed the applications received for this competition,” wrote Shawna Pinckney, director of the Office of Head Start’s grants and contract division. “… I regret to inform you that your organization was not selected for funding.”

The letter enclosed the panel’s evaluation of the strengths and weaknesses of CAFI’s grant proposal, noting that the writers failed to provide the number of pregnant women that would be served, along with the number of children needing full-day and year-round care. The panel also said the proposal did not provide numbers of expectant mothers currently served or how many expectant mothers could be served if the grant was awarded.

CAFI’s grant proposal did not provide an explanation of its “plan to offer family literacy and parent skills training using evidence-based curricula and approaches,” the panel concluded.

The panel wrote that CAFI did not state whether it required caregivers to hold an “infant (and) toddler (child development associate’s degree) or if the diploma from a technical college in early childhood development includes a focus on infant and toddler development” as required by the grant.

The grant proposal also lacked any statements about whether the facilities would be accessible by state and local authorities for the purpose of monitoring and ensuring compliance, the panel wrote.

One weakness the panel pointed out, though, claimed CAFI’s grant proposal failed to “explain how it would approach staffing continuity across the days, months and years of service for infants and toddlers.”

On pages 79 through 81 of CAFI’s grant, however, the nonprofit clearly states a variety of measures taken to address attracting and maintaining qualified staff.

“In accordance with the Head Start of 2007 (law revision), the agency supports a system of strong continuing education to ensure that qualified staff is available,” the grant reads. “… Evaluations are completed yearly and are utilized to define agency and individual training. Evaluations are used in the development and in support of each staff’s individual professional development plan.”

Other services to continue

Although CAFI won’t be providing Head Start child care services anytime in the immediate future, the organization will continue to contribute other services it provided in the past, Foster said. Those areas of assistance include low-income home energy assistance, emergency food and shelter and back-to-school supplies, according to the organization’s 2015 annual report.

During CAFI’s 2014 fiscal year, the agency helped more than 5,400 people in five counties, according to its report. Service centers located in the counties CAFI covers provided nearly $638,000 in services in fiscal year 2014 alone. The aid is made possible by contributions from public and private funds and resources, according to CAFI.

Additionally, in the winter time, the organization provides — and will continue to provide — in-need senior citizens age 65 and older with assistance on their heating bills. That program, the Low-Income Home Energy Assistance Program, helped 5,512 people in Carroll, Coweta, Heard, Meriwether and Troup counties in 2014 at a cost of $1.9 million.

“At CAFI, our goal is to help to reduce poverty and to be able to help reduce barriers … we’ll be here to continue to provide services,” Foster said.