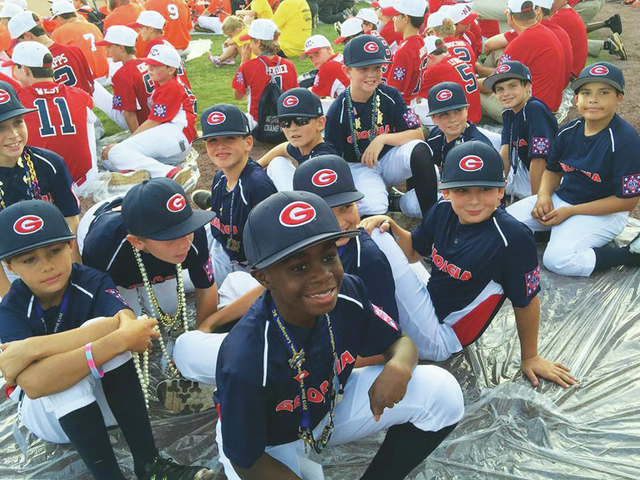 Team Georgia will try to keep its championship hopes alive when it plays Florida today in an elimination game in the Dixie Youth Baseball World Series. Contributed photo

http://lagrangenews.com/wp-content/uploads/sites/37/2015/08/web1_8-12-team-georgia.jpgTeam Georgia will try to keep its championship hopes alive when it plays Florida today in an elimination game in the Dixie Youth Baseball World Series. Contributed photo

LEXINGTON, S.C. – The quest for a championship is still very much alive, but the margin for error is gone.

Team Georgia (formerly Troup National) came into Tuesday’s Dixie Youth Baseball World Series game with a 3-0 record, and it was 13-0 in tournament play this summer.

Georgia finally met its match, though, with a strong Alabama team rolling to a 14-1 victory in a game shortened to four innings because of the run rule.

Fortunately for Georgia, it is a double-elimination tournament, so it still has a chance to bring the championship trophy home to Troup County.

There are four teams remaining in the tournament, including an unbeaten Alabama team.

Georgia, South Carolina and Florida all enter today’s game with one loss.

In today’s games, Georgia will play Florida at 5:45 p.m., and Alabama will play South Carolina at 8 p.m.

If Alabama wins, it would play either Georgia or Florida in the championship round on Thursday at 10 a.m.

Georgia or Florida would need to beat Alabama twice on Thursday to win the championship.

If South Carolina beats Alabama today, there would be three teams with one loss.

Two of those teams would play on Thursday at 10 a.m., and the winner of the game would play the other one-loss team for the championship at 5 p.m. the same day.

Georgia and Florida have already played once in the tournament, and it was a thriller.

The game ended when C.J. Stephens was hit by a pitch with the bases loaded.

One day after that emotional win over Florida, Georgia had to turn around and play an Alabama team that had a bye on Monday.

Georgia scored its lone run in the bottom of the second.

After Trey Cook reached on an infield single, Trevor Booton followed with an RBI double, making it a 4-1 game.

Devon Murphy, T.J. Wilkerson and Booton all pitched for Georgia.

Another thrilling win for Georgia