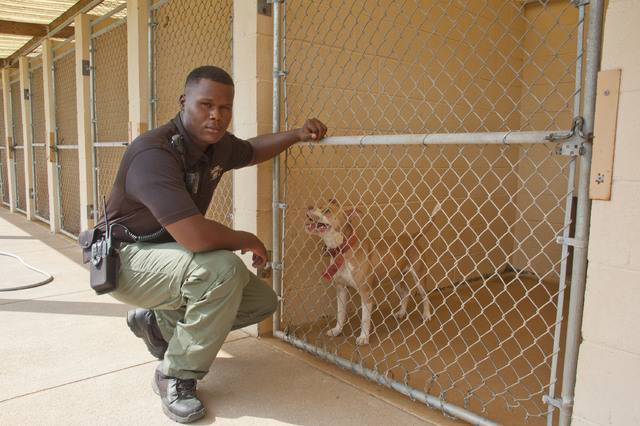 A pit bull dog that a Hogansville man says attacked him and his dog July 29 growls behind the bars of a kennel at LaGrange Animal Shelter on Tuesday. The victim said the pit bull had been previously left chained up at a neighbor’s house, and it attacked his dog when it pulled itself free from a leash handled by a young teen.

http://lagrangenews.com/wp-content/uploads/sites/37/2015/08/web1_WEB0812PitBull011.jpgA pit bull dog that a Hogansville man says attacked him and his dog July 29 growls behind the bars of a kennel at LaGrange Animal Shelter on Tuesday. The victim said the pit bull had been previously left chained up at a neighbor’s house, and it attacked his dog when it pulled itself free from a leash handled by a young teen. LaGrange Animal Control Officer DeMarcus Formbly crouches next to a pit bull dog in a kennel at LaGrange Animal Shelter on Tuesday. The pit bull allegedly attacked a Hogansville man and his dog on July 29, prompting questions about enforcement of the Hogansville ordinance regulating the breed.

http://lagrangenews.com/wp-content/uploads/sites/37/2015/08/web1_WEB0812Pitbull021.jpgLaGrange Animal Control Officer DeMarcus Formbly crouches next to a pit bull dog in a kennel at LaGrange Animal Shelter on Tuesday. The pit bull allegedly attacked a Hogansville man and his dog on July 29, prompting questions about enforcement of the Hogansville ordinance regulating the breed.

HOGANSVILLE — City officials plan to crack down on residents who are in violation of the Dangerous Dog Control Law, also known as the pit bull ordinance, after a pit bull attacked a resident and his dog July 29.

Johnny Mulliniks, the victim in the attack, said that he called and made two separate reports to the police department in June, informing police that the dog’s owners were not in compliance with city regulations.

“If anyone owns a pit bull in Hogansville, they are required to have it registered with the city, show proof of insurance on the dog, and also comply with measures that deal with keeping it in a proper enclosure,” said City Manager James Woods. “We require this for any dog that is considered by the United Kennel Club to be a pit bull or pit bull mix. Basically, if it looks anything like a pit bull, it had better be registered and in compliance with our laws.”

Mulliniks said that the dog that attacked him and his dog, Vinnie, had been kept outside for months on a chain at the edge of a treeline behind his neighbor’s house. The owner of the pit bull was later cited for violating the city’s leash law and the pit bull ordinance.

“This dog was chained outside in a wooded area and every time me or my dog got anywhere near it, it would become very aggressive,” said Mulliniks. “I knew something was going to happen sooner or later if the city didn’t do something about it.”

According to Mulliniks, the attack happened when his neighbor’s 13-year-old son was bringing the dog back into his house from the area where it was chained.

“I was walking with my dog around the side of my house and our neighbor’s dog — a Jack Russell terrier — was alongside us,” said Mulliniks. “When I saw the child walking the dog in their yard, I immediately went to take my dog, which was also on a leash, inside.”

Mulliniks said that the dog lunged, causing the child to lose control of the leash. The pit bull first attacked his neighbor’s dog before turning its attention to Vinnie as the two tried to get into their home. Mulliniks said that he tried everything he could to stop the attack.

“I jumped onto the pit bull’s back, hitting and pulling its head and kicking it,” said Mulliniks. “It wouldn’t budge. I was screaming for help and the child was crying. I dug my fingers into the dog’s eyes, but nothing would work.”

Mulliniks said that the dog’s owner was afraid to intervene and stop the attack, which finally ended after the man’s wife managed to pull the dog away.

During the struggle, Mulliniks said the pit bull knocked to the ground and bit him on the upper thigh. The attack left Mulliniks with a fracture to his shoulder and a puncture wound on his thigh. Vinnie survived, but underwent surgery to repair severe injuries to his neck. Mulliniks now faces thousands of dollars in medical expenses for himself and his dog.

“The landlord of the property is offering $5,000 to cover medical expenses, but that won’t cover everything,” said Mulliniks. “I’m not a greedy person. I’m not looking to get a bunch of money out of this, I just don’t want to be paying all this money for something that wasn’t my fault.”

Mulliniks said the attack could have been prevented if the city had enforced its pit bull ordinance. He said that he was shocked when Officer Raymond Baker arrived to the scene and said that the pit bull’s owner was not in violation of the ordinance.

“I told the officer that I had reported the dog multiple times before this happened and he said, ‘they can have the pit anywhere they want to in Hogansville,’” said Mulliniks.

The dog’s owner was not cited for violating the pit bull ordinance until the following day when Hogansville Police Department officers returned to the home to conduct further investigation of the incident. The dog was then taken to the LaGrange Animal Shelter.

“I felt like we needed to follow up and check to see if the dog’s owner was in compliance with the city’s ordinance,” said police Chief Brian Harr. “Due to the turnover in our department, I think some of our newer officers are not as familiar as they should be with the details of the ordinance. We are making efforts to bring them up to speed.”

Harr believes that keeping the dog chained in isolation for long periods of time contributed to its aggressive behavior.

“I think tethering a dog like that can lead to increased aggression in any breed — not just pit bulls,” said Harr. “Should there be a law against it? I think that’s a discussion that needs to take place.”

Mulliniks said that he feels reassured that the city will be taking a tougher stance on enforcing the pit bull ordinance after speaking with Woods.

“It’s a tragedy that this happened and I’m glad that Mr. Mulliniks and Vinnie survived,” said Woods. “The pit bull ordinance was passed so that we could avoid this kind of tragedy.”

Ordinance ‘to keep our community safe’

Woods said that the ordinance was passed in 2010 after a rash of reports across the country of people being mauled by pit bulls — as well as instances involving local residents and pit bulls — prompted city officials to take preventative steps.

Residents and city officials called for measures that would prevent pit bull attacks after a 2010 incident in which an animal control officer with HPD was attacked by a pit bull. The officer was mauled when he stepped between a pit bull that was poised to attack an elderly man in Hogansville. The dog continued to attack the officer until it was shot and killed. The officer suffered permanent nerve damage from his injuries.

According to Woods, there are just two pit bulls currently registered with the city. He noted that residents who have unregistered pit bulls or pit bull mixes will face penalties.

“If you live in Hogansville, and you own a pit bull, I would suggest that you come to City Hall and take the necessary steps to comply with our pit bull ordinance,” said Woods. “The purpose of this law is not to harass pit bull owners, but to keep our community safe.”

According to DogsBite.org, a nonprofit research and education organization that conducts research on severe and fatal dog attacks inflicted by dangerous dog breeds, there have been 18 documented cases in the United States of people who have died in pit bull attacks so far in 2015. Eight of those victims were children age 10 or younger. The organization also recorded 42 people mauled to death during 2014 by pit bulls in the United States, 19 of those victims were children.

“I don’t think that pit bulls are necessarily more dangerous than any other breed of dog,” said Chris Bussey, director of the LaGrange-Troup County Animal Shelter. “It has a lot to do with how they are raised.”

Woods echoed Bussey’s statement, but added that the number of documented cases in which pit bulls have been responsible for attacking people necessitates preventative measures against possible attacks.

“Pit bulls are generally big, strong dogs that are capable of overpowering a grown man,” said Woods. “No matter how cute and cuddly they are, they will always have that wild, instinctual nature within them that can make them become dangerous.”

Mulliniks is grateful that he and his dog were not more seriously injured. He hopes that the incident will prompt the city to be more diligent about enforcing the pit bull ordinance.

“It usually takes something bad to happen before change is enacted,” said Mulliniks. “I really hope some good comes out of this. I would love for Hogansville, LaGrange and all of Troup County to somehow spread the word about the vicious dog ordinance.”