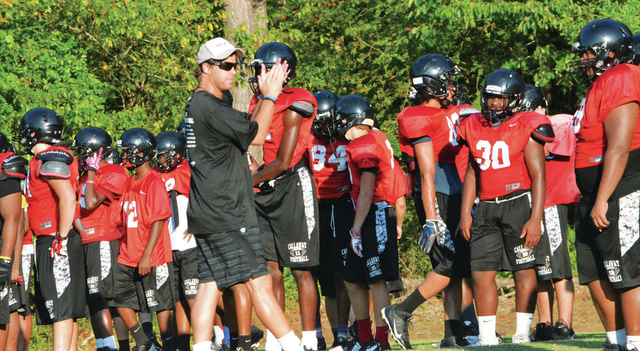 Pete Wiggins, who is beginning his 11th season as Callaway’s head coach, keeps an eye on things during practice. Callaway will play Greenville in a preseason game on Friday before opening the season next week against LaGrange. Kevin Eckleberry | Daily News

http://lagrangenews.com/wp-content/uploads/sites/37/2015/08/web1_8-13-callaway4.jpgPete Wiggins, who is beginning his 11th season as Callaway’s head coach, keeps an eye on things during practice. Callaway will play Greenville in a preseason game on Friday before opening the season next week against LaGrange. Kevin Eckleberry | Daily News HOGANSVILLE – For the past four football seasons, Callaway head coach Pete Wiggins knew he could pencil Terry Godwin and Eddie Culpepper into the starting lineup, and that was a comforting thought.

Godwin and Culpepper were both four-year starters for the Cavaliers, and they were a part of some great moments over the years, highlighted by a final-four appearance in 2013.

When the Cavaliers take the field for Friday’s preseason game against Greenville, Godwin and Culpepper will be preparing for the college-football season with their respective teams, and a number of other seniors from the 2014 season have moved on as well.

Players come and players go, and the successful programs find a way to keep the wins coming, even as the names on the roster change.

“We’ve got a lot of holes to fill from last year,” Wiggins said. “We’ve got some big names to replace. Terry Godwin and Eddie Culpepper were both four-year starters. They are special ballplayers. LaBronze Zelaya, Devin Powell, Josh Williams. Those guys played a lot of ball for us, and did really well. And they played in a lot of big games. Those are some big shoes to fill.”

Callaway has been here before under Wiggins.

The school has had some incredibly successful players over the years, and when they have graduated, the team has kept on winning.

“I think we’ve got a great tradition, and our kids work hard, and our coaches coach hard,” Wiggins said.

The continuity on the staff helps.

“We’re starting our 11th year together,” Wiggins said. “Coach Hubbard and coach Napier have been calling plays a long time, and running our offense and defense. We’re still doing what we’ve been doing for a long time. I feel like our coaches know it well, and when we do face problems, they know how to adjust. I think that helps us. They’re both great leaders, and good coaches.”

Kareem Douhne and Terry Hayes are the other two coaches still around who were a part of that 2005 staff.

“It’s a great group of people,” Wiggins said of the entire coaching staff. “We’ve had a lot of good kids that have bought into what we do over the years. They practice hard, and they work hard in the offseason. It shows on Friday night. I feel like the kids believe when we get on the field, we’re going to win. They believe in what we do, and they believe in one another. On my end, I appreciate the hard work from these coaches, and the kids.”

The Cavaliers had losing seasons in Wiggins’ first two years at the helm, although they did make the state playoffs in 2006.

Since 2007, Callaway hasn’t won fewer than seven games in a season, and the program has won nine playoff games since the 2008 season.

Overall, Wiggins has a record of 81-37, and he is one of the longest-tenured coaches in Class AAA.

Despite the loss of the talented seniors from last year’s team, the Cavaliers appear poised to keep things moving in the right direction this year.

Braylon Sanders is making the move from wide receiver to quarterback this season, and Wiggins said the offense is in great hands with him running the show.

“Braylon Sanders has had a good summer,” Wiggins said. “We got better each week at seven on sevens. I feel like he’s gotten more comfortable running our offense, and just learning the system.”

Senior Dre Martin, who like Godwin and Culpepper will be a four-year starter, has made the transition to wide receiver this season, and he’ll also be a free safety on defense.

A year ago, Martin started the first five games of the season at quarterback.

“Dre has had a great summer,” Wiggins said. “He has worked hard in the weight room. He has really developed as a wide receiver, and looking better each day at safety. I’m really proud of him.”

Cedric Maynard heads into the season as the number one option at running back after Culpepper filled that role last year.

“He had a lot of reps last year. He backed up Eddie,” Wiggins said. “He’s had a lot of reps over the years. His sophomore year, he had some really big runs for us in some big game. Cedric Maynard, he’s one of the faster kids on the team. We’re looking for him to make some big plays.”

The offensive line will be anchored by senior Cortney Laye, who is a three-year starter.

Defensively, Callaway has some experienced men up front, including defensive lineman J.T. Wortham, who won the team’s Ironman competition.

Dre Martin is a defensive veteran, although he is moving to a new position this season as a free safety.

“He’s a four-year starter, and he’s got a lot of game experience at a lot of different positions,” Wiggins said.

Among the linebackers is Javoski Leverette, who missed almost the entire 2014 season after breaking his leg in a preseason practice.

The only action Leverette saw last season came in the second round of the state playoffs against Washington County.

“He had a tough year last year,” Wiggins said. “I remember about a year ago this week, he broke his leg, and he didn’t get to play until right at the end of the year. He got a few reps against Washington County. He really committed to the weight room in the offseason, and he’s really played well. He had a good summer at seven-on-seven camps and has really been a leader on our team, and a leader on our defense.”

Callaway will play five Region 5-AAA games beginning with a home game against Cedartown on Oct. 8.

“We’ve got a long way to go to get to where we want to be, but I feel like our schedule will help us prepare us for that, too,” Wiggins said. “We play Greenville, and then right out of the gate we play LaGrange, and B.E.S.T. Academy, Troup County and Harris County. All those teams are really good, and they’re all well-coached. It’ll be physical games.”

OF NOTE: For in-depth team previews of Callaway, LaGrange and Troup, see the preseason football edition that will come out on Aug. 21.