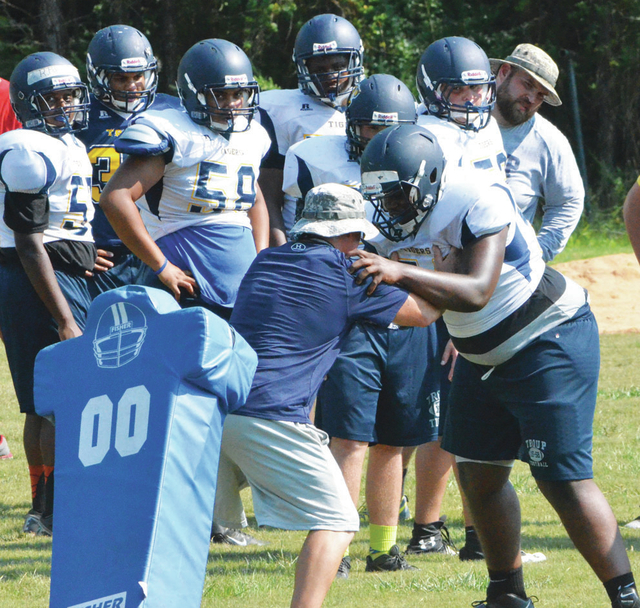 The Troup Tigers won’t play their first regular-season game until Aug. 28 when they take on rival LaGrange, but they will be on the field the next two weeks for preseason games.

First up will be today’s home game against Spencer, with kickoff set for 7 p.m.

A week from today, Troup will complete its preseason schedule with another home game against Upson-Lee.

Then it’ll be go-time, with Troup looking for a third consecutive victory over LaGrange.

There will be plenty of excitement for the Tigers today, and not just because it’s their first chance to line up against another team since the final game of the 2014 season.

It will be the debut for head coach Tanner Glisson, who comes to Troup after spending the previous two seasons as the head coach at Manchester.

There are also a handful of new assistant coaches on staff, in addition to some returning coaches, including Lynn Kendall, who was the head coach the past three seasons.

Glisson said all of the coaches have been doing a great job of giving off a “positive vibe.”

“I think it’s just how we live every day,” he said. “I think this group of guys right here gives off a positive vibe that the kids feed off. That’s the key. Everybody can talk about doing something new, living it out and putting the plan in. You have to put the plan into action.”

Today’s game will give the players a chance to put what they’ve learned during the summer and the two-plus weeks of preseason practice to the test.

The Tigers will unveil a new up-tempo offense, with quarterbacks Ken Truitt and Montez Crowe both set to get plenty of action.

Today’s game will also be a valuable learning experience for the defense, since most of the players on that side of the ball didn’t start a year ago.

Spencer also has a first-year head coach in Pierre Coffey, who spent the previous four seasons as an assistant coach at Carver.

Spencer, which went 1-9 last season, hasn’t made the playoffs since 1993, and it hasn’t enjoyed a winning season since 1976.

Troup went 3-7 last season, although it did win the county championship after beating LaGrange and Callaway.

Glisson said the starters for both teams will play the first half and part of the third quarter before the junior-varsity and freshmen players get a chance to take the field in the second half.