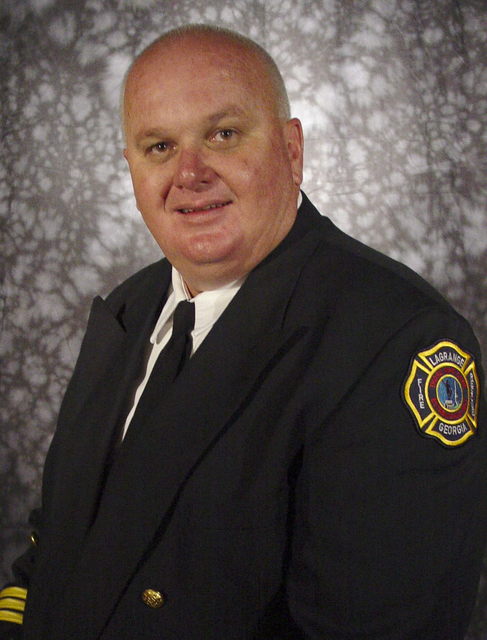 The competitors in the 5K Ray’s Run take off at the start of the 2011 race at the Mike Daniel Recreation Center.

http://lagrangenews.com/wp-content/uploads/sites/37/2015/08/web1_WEBfileRace1.jpgThe competitors in the 5K Ray’s Run take off at the start of the 2011 race at the Mike Daniel Recreation Center. “He was a big, jolly fellow most of the time,” remembered Sgt. Mike Webb, accreditation manager with the LaGrange Fire Department. “He was well respected.”

Stewart started at the LaGrange Fire Department in 1979 and was quickly promoted up the ranks. He was with the department 30 years when he died suddenly early in the morning of Nov. 11, 2010, while getting ready for work.

“I had no idea where we were going until we got (to Stewart’s house),” he said. “It was hard. His wife was standing at the door, looking at us saying, ‘Y’all hurry,’ and we got in there and started working on him. They later told us it wouldn’t have mattered what we did … even if he made it to the operating table, he was gone. It was just a massive aneurysm.”

Stewart’s sudden death stunned his family and colleagues, but his loved ones vowed to keep his memory alive.

The following summer they started Ray’s Run, a 5K run and 1 mile “Ray” walk in Stewart’s memory at the Mike Daniel Recreation Center on Lafayette Parkway.

“The 1-mile route people do is the 1-mile route that Ray and one of the lieutenants would walk every morning when they got off shift,” Webb explained. “This, to me, is the best tribute to Ray. He was walking that route every day, trying to get in shape and lose some weight. He was trying to better his health for his family’s sake.”

The tribute to Stewart is now going into its fifth year. Ray’s Run is set to kick off bright and early Saturday morning.

Webb said all the proceeds from Ray’s Run will go to the Georgia Firefighters Burn Foundation, a charity that was close to Stewart’s heart.

“He would go over to the burn camp for kids at least one day every year and spend the day with them,” Webb remembered.

In addition to the run/walk, Webb said there will also be the traditional kickball game after the race is over — the LaGrange firefighters versus Stewart’s sons and friends.

Webb said he hopes there is a good crowd of folks participating and cheering from the sidelines. He would like to see Ray’s Run continue to grow bigger and better each year.

“Come out and support the Georgia Firefighters Burn Foundation and pay tribute to a guy who put a light in this community and who served this community for more than 29 years,” Webb stated.

Webb said the kickball game will begin around 9:30 a.m. in the baseball fields behind the Rec Center off Ragland Street.

Anyone interested in registering for the race can do so on the Facebook page under “Ray’s Run.” The cost is $25. T-shirts will be first come, first serve.

People can also register for the run at the recreation center Saturday prior the race.