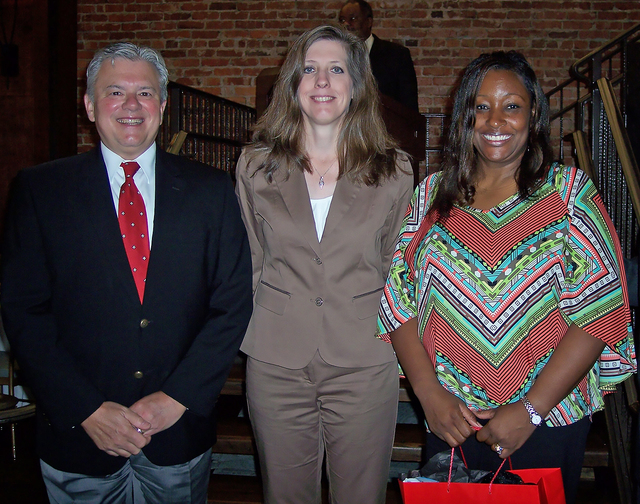 State Rep. Stacey Abrams, House Minority Leader for the Georgia General Assembly, second from right, spoke during Tuesday’s Early Bird Breakfast. Abrams is the first woman to lead either party in the state general assembly and the first African American to lead in the House of Representatives. She is shown, from left, with Chamber board Chairman Libby Willingham, state Rep. Randy Nix and state Rep. Bob Trammell Jr.

http://lagrangenews.com/wp-content/uploads/sites/37/2015/08/web1_WEB0814EBB01.jpgState Rep. Stacey Abrams, House Minority Leader for the Georgia General Assembly, second from right, spoke during Tuesday’s Early Bird Breakfast. Abrams is the first woman to lead either party in the state general assembly and the first African American to lead in the House of Representatives. She is shown, from left, with Chamber board Chairman Libby Willingham, state Rep. Randy Nix and state Rep. Bob Trammell Jr. LaGRANGE — The path to becoming a leader is not always easy, simple or smooth. It is often marred with difficulties and obstacles of all shapes and sizes. A little encouragement can make a big difference.

State Rep. Stacey Abrams is well aware of the difficulties. She didn’t become the House Minority Leader of the Georgia General Assembly overnight, and the odds were not in her favor to grow up to be the first woman to lead either party in the state general assembly nor the first African-American to lead in the House of Representatives.

Abrams grew up poor in Hattiesburg, Missippi, one of six children of a mother who almost dropped out of school in fourth grade and a father thought unable to learn due to undiagnosed dyslexia.

“When they got married and had six of us, my parents did what we called visiting poverty a lot. We didn’t live there, but we had a really nice summer home,” she said with a laugh during Tuesday’s Early Bird Breakfast, hosted by the LaGrange-Troup County Chamber of Commerce. “They believed in more for us. They saw more for us, and they never told us we couldn’t do things. We grew up not realizing there were limits to our possibilities.”

When their power was cut off, their mother would have them volunteer at a homeless shelter. When they didn’t have a summer vacation, they provided their talents at juvenile homes. Abrams’ parents made a conscious decision to teach their children the proper values of true leaders — cooperation, competitiveness and accountability.

“The first part of leadership is to cooperate. The second part of leadership is if you compete you have to compete honestly,” she said. “We’re taught that as a leader you’re supposed to be right all the time, but every person learns from their mistakes. You made some mistakes and someone held you accountable, and that’s how you got better.

Her older sister is a professor of cultural anthropology at Centre College in Danville, Kentucky, the first African-American professor to receive tenure at the college. Her younger sister is an evolutionary biologist working for the Centers for Disease Control and Prevention in Atlanta. Yet another sister is the first African-American woman confirmed to be a federal judge in Georgia. One brother works with disabled children and adults in LaGrange and her other brother is currently working back in Hattiesburg.

“Now, this is the product of two parents who barely understood how to get out of school but in a generation they transformed their families,” she said. “My parents never told us there was anything we couldn’t do, so between the six of us, we decided to try and do all of it.”

And she still does. Besides being a major political figure, she’s the owner and operator of several different businesses, spanning financial services with NOWaccount Network Corp. to infant and toddler beverages through Nourish Inc.

She carries that same mentality with her into the state general assembly as well. She sees Georgia as a state on the cusp of transformation, one that can shine bright into the future and lead the country in changing for the better. But they need more leaders to blaze the trail.

“The state of Georgia is a wonderful state, but we have potential to be a great state. We have the potential to move beyond the boundaries that have kept us, I think, a little too tight — too close to our past,” Abrams said. “The state’s changing now. We can change with it or we can be left behind.”

Abrams congratulated the Chamber on choosing 32 capable individuals to take part in Leadership Troup, a nine-month program designed to develop leadership skills and promote community involvement within existing and emerging community leaders from across Troup County.

By creating more leaders that abide by the core principles of cooperation, competitiveness and accountability, the state can better itself from the ground up, through the people who reside in it.

“I’m here today because I believe that Troup County, that LaGrange, Georgia, could be the leader in that. You can lead us forward because you look like Georgia; you’re willing to think about Georgia. You may focus on your community, but you understand that what you do here will ripple out to everywhere else.

“You are the future, but more importantly, you’re the present, and if you’re willing to do the work, I’m certain that you will be great — always.”

Abrams received the 2012 John F. Kennedy New Frontier Award, honoring an elected official under 40 whose work demonstrates the impact of elective public service as a way to address public challenges. She has also been recognized nationally as one of 12 Rising Legislators to Watch by Governing magazine, as well as a 2014 Governing magazine Public Official of the Year and one of the 100 Most Influential Georgians by Georgia Trend in 2012 and 2013.