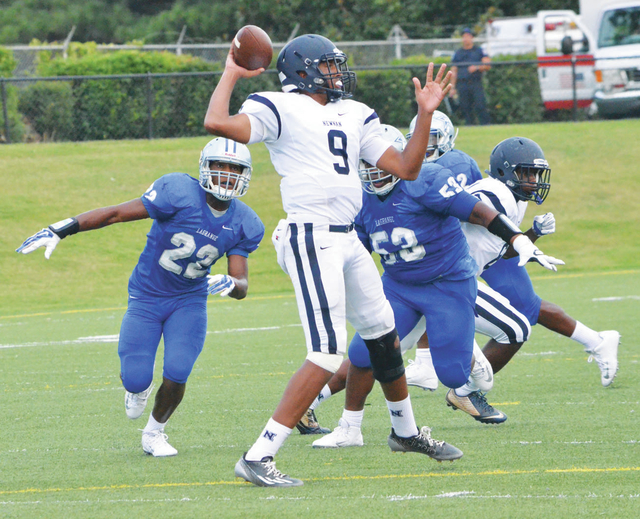 LaGrange running back Jeremiah Wright fights for extra yard during the first half of Friday’s preseason game against Newnan. Kevin Eckleberry | Daily News

http://lagrangenews.com/wp-content/uploads/sites/37/2015/08/web1_8-16-LHS2.jpgLaGrange running back Jeremiah Wright fights for extra yard during the first half of Friday’s preseason game against Newnan. Kevin Eckleberry | Daily News LAGRANGE – LaGrange’s starting offensive players made the most of their final moments on the field.

Heading into Friday’s preseason game, the LaGrange and Newnan coaches agreed that the starters would play the entire first half, and then the first series of the second half.

The Grangers got the ball first at the start of the second half in a tie game, and they drove the ball down the field, needing eight plays to score the go-ahead touchdown.

On the ensuing possession, the Cougars made it to the Grangers’ 3-yard line, but a lost fumble ended that threat.

That was the end of the night for the starters, and LaGrange had a 13-7 lead at that point.

Newnan scored a touchdown later in the third quarter after a botched punt attempt by LaGrange deep in its own territory.

That touchdown and the ensuing extra point proved to be the difference as Newnan won 14-13.

It was a great tune-up for the Grangers as they head into next week’s season opener against the Callaway Cavaliers.

“We just ran base stuff,” LaGrange head coach Dialleo Burks said. “We just wanted to see the guys play. We’ll get a chance to evaluate things and see who needs to be in in certain situations and see what we’ve got. That’s it.”

LaGrange’s two touchdowns both came with LaPerion Perry at quarterback.

In the first half, Perry led the Grangers on an 84-yard touchdown drive that was capped by a 20-yard scoring pass to Mike Hardy.

In the second half, the Grangers drove 81 yards for the score, and Kimani Barnes capped that drive with a 1-yard touchdown run.

The second-half drive began in electrifying fashion when Perry eluded a few tackle attempts and used his speed and elusiveness to beat the Newnan defense for a 26-yard run.

On the next play, completed a 14-yard pass to Barnes, putting the ball on the Newnan 41-yard line.

From there, it was mostly Barnes doing the damage.

Barnes ripped off a 22-yard run, and after an 8-yard keeper by Perry, the senior running back had runs of two and three yards to set up his touchdown run.

During the first-half touchdown drive, the Grangers were facing third-and-13 from their own 13-yard line when Perry scrambled for a 17-yard run to get the first down.

Perry followed that up with a 23-yard run to put the ball in Newnan territory.

Perry then capped the drive when he connected with Hardy for the 20-yard touchdown, and the extra point deadlocked the score at 7-7, which was the score at the half.

Newnan went about 90 yards for a first-quarter touchdown, but its first-team offense didn’t score again against LaGrange.

“We did some good things,” Burks said. “Now, the scrimmage is over, and it’s the real deal.”

LaGrange will be the home team for Friday’s game against Callaway, with kickoff set for 7:30 p.m.

A year ago, LaGrange had a 14-0 lead in the fourth quarter, but Callaway rallied for a 20-14 victory in overtime.