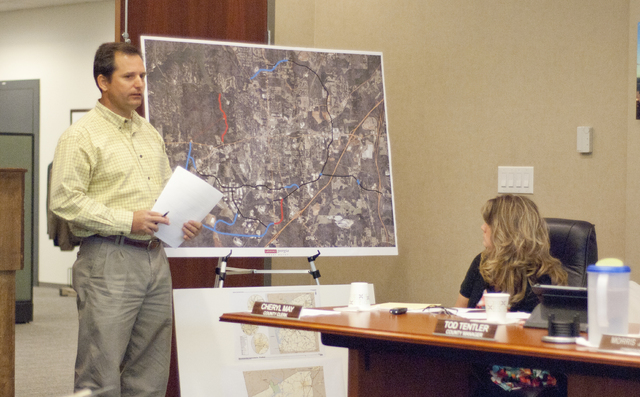 This map provided by Troup County, with location notations added, shows two new road work projects that will continue the LaGrange bypass are in the planning and design phases, according to an update to county commissioners Friday by James Emery, county engineer.

http://lagrangenews.com/wp-content/uploads/sites/37/2015/08/web1_RoadWord.jpgThis map provided by Troup County, with location notations added, shows two new road work projects that will continue the LaGrange bypass are in the planning and design phases, according to an update to county commissioners Friday by James Emery, county engineer. LaGRANGE — Motorists who travel through northwest and south central LaGrange may have an easier commute once two LaGrange bypass projects are completed, according to the county engineer.

James Emery of the county’s roads and engineering department told commissioners during their work session Friday that two new projects are moving forward after the city of LaGrange, property owners and engineers have discussed the planning and design of 3.5 miles of new bypass.

The first phase of the second project, called the northwest connector, is slated to add nearly two miles of new roadway to the northwest section of LaGrange, connecting Vernon Woods Drive to Cameron Mill Road. That new roadway would allow motorists to turn right onto Vernon Woods Drive off Vernon Road and eventually arrive at a new intersection in front of County Club Drive, just north of Hollis Hand Elementary School. The road will have a 45 mph design speed, Emery said.

Eventually, that second road would connect the new northwest connector with Pegasus Parkway. That route is planned to run from where Pegasus dead ends into Roanoke Road near Cedarcrest Community Church to connect a roundabout intersection about half way through the new Vernon Woods Drive to Country Club Drive road. That project is still in its early planning phases and nothing has been set in stone, Emery told commissioners.

“The east-west movement through LaGrange has always been the biggest struggle we’ve had in all of Troup County,” Emery told commissioners. “There’s just very few lanes. When it comes down to it, if you’re going east to west through downtown LaGrange, there’s just no way around it, you’re going to wind up on a two-lane road on Vernon Road. Anything we can do with our bypass system helps that congestion.”

County officials also home the added routes will improve response times for ambulances, police and firefighters, as well as access to West Georgia Medical Center for residents who lives on the north side of LaGrange.

“One of the biggest impacts that these projects are going to have is accessibility,” Emery said. “Anyone who is north of the hospital that right now might have to go through the congested areas of downtown, would have the option of coming without any congestion straight into the hospital.”

School buses could also be rerouted, Emery said, to provide shorter routes that would take less time and cost less in fuel.

Neither project has been put to public bid yet, Emery said. The Davis Road realignment’s initial design phase is “almost complete” Emery said, but engineers may make additional changes after public comments at a later date.

A map of the planned new roads is on display at the county’s planning and zoning office on the first floor of the Troup County Government Center, 100 Ridley Ave.