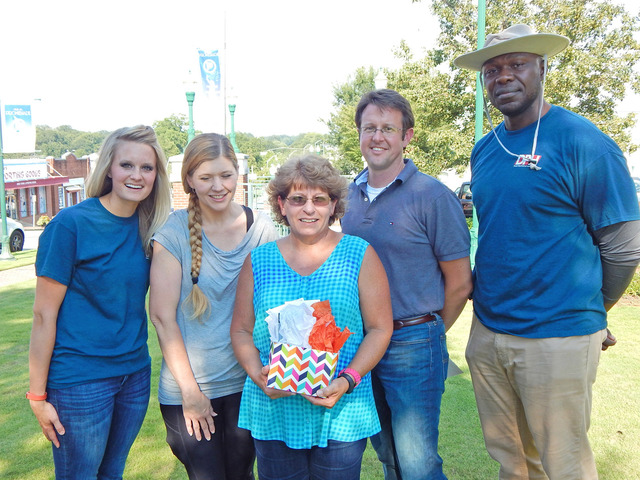 LaGRANGE — Barbara Ward isn’t a runner. You won’t even see her out walking very much except for an occasional walk around the Granger Park track with her husband.

So it might surprise folks to know that Ward, 53, logged the most steps in District 4 Public Health’s FitBit Challenge, surpassing 131 other participants. She recorded a whopping 1,004,273 steps during the month of July.

That’s an average of 32,395 steps a day, or about 15 miles daily for Ward, who has been the physical education teacher at Berta Weathersbee Elementary School for the past 29 years.

“It’s unreal how Barbara just outpaced all of us,” said Allie Crawford, accreditation assistant and social media coordinator for District 4 Public Health. “And the way Barbara stays active is particularly inspiring because she incorporates small moves and modifications into her everyday routine that shows you can be fit and not even have to carve out a lot of time to exercise.”

Crawford and her colleagues at District 4 had been wearing FitBits — wireless activity trackers that monitor the number of steps one takes, distance traveled, calories burned and even sleep cycles — for quite awhile to become aware of their physical activity. Their friendly competition among each other sparked the idea to sponsor a FitBit Challenge for the entire Troup County community than ran July 1 to 31.

The FitBit Challenge brought together 132 participants, Crawford said, who each was able to view on fitbit.com the number of steps their competitors made daily. Ginny Tipsword logged 919,308 steps to take second-place honors, and Brennen Salter won third place with 635,147 steps.

“Thank you for organizing such a great challenge along with your sponsors,” Salter commented on the District 4 Facebook page. “To all the challengers, thank you for helping to push me day after day. I enjoyed it.”

Ward said she began living a more active life years ago to help improve her asthma. In addition to breathing difficulties, her asthma medication caused weight gain, she said.

“Anyone who knows me knows I can’t stand still,” she said. “If I’m folding clothes, I stand up and am constantly moving my feet. I do the same when I wash dishes. When I watch TV, I get up and move during commercials.

“I’ve even put small weights all around my house,” Ward said. “As I go room to room, I can just pick up the weights as I’m moving and get an extra boost.”

Barbara and her husband, Mark Ward, added a Map My Fitness app in 2012 to track calorie-burning when they joined the Vitality wellness program at West Georgia Health, where Mark works in the Information Technology Department. They began using FitBits two years ago.

Through the Vitality program, West Georgia Health employees and their spouses earn points as they complete health assessments and screenings, select and set personalized wellness goals, and complete activities that promote exercise and healthy eating. Earning points not only can help them maintain a healthy weight and reduce the risk of chronic disease, but also gives employees discounted health insurance premiums.

She and her husband also mow five of their neighbors’ yards with a push-mower, and she loves to swim. Ward also swears by her mini-trampoline, which she uses to “rebound” each morning for about 20 to 35 minutes. She finds rebound exercise routines on YouTube.

“I’m determined not to be bored when I exercise, and rebounding is so much fun,” she said. “It’s also very easy on the knees and joints.”

She said her P.E. students love to challenge her in physical activities, which makes exercise fun for them.

At a small gathering this week to honor the winners and to let fellow competitors meet each other, Crawford said District 4 plans to make the FitBit Challenge an annual event. She smiled when she told the participants that first-place winners will not be able to place first in future competitions.

“I’ve joked with several people that I’m worried no one would join our Challenge if they knew Barbara had the chance to win again,” she said.