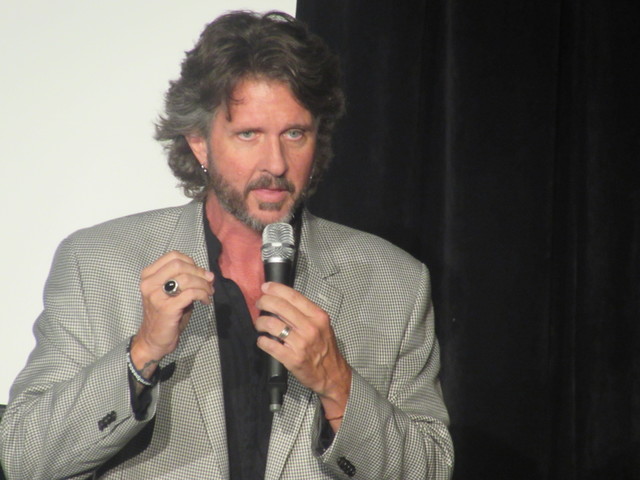 Kit Cummings, founder and president of the Power of Peace Project, speaks in front of an audience at the LaGrange College Price Theater on Saturday. He was one of the special guest speakers for the Troup County Anchor Foundation’s presentation Retrospective: A Time of Healing. The event paid tribute to victims of violence and those who had lost loved ones to it.

http://lagrangenews.com/wp-content/uploads/sites/37/2015/08/web1_WEB0817Cummings3.jpgKit Cummings, founder and president of the Power of Peace Project, speaks in front of an audience at the LaGrange College Price Theater on Saturday. He was one of the special guest speakers for the Troup County Anchor Foundation’s presentation Retrospective: A Time of Healing. The event paid tribute to victims of violence and those who had lost loved ones to it.

LaGRANGE — Victims of violence can be of any race, faith, religion and socio-economic background.

On Saturday, some of those survivors of violence in our community — in addition to folks who lost loved ones, along with law enforcement officials, church pastors, state and local politicians, service organizations and complete strangers — gathered at the LaGrange College’s Price Theater to show their support for the victims in a unified front against violence.

The gathering was part of the Troup County Anchor Foundation’s event called Retrospective: A Time of Healing.

“We need to take back the power we have as a community and as neighbors,” Ameia Cotton, Troup County Anchor Foundation president and founder, told the audience.

The presentation featured short, five-minute documentaries from a teenage shooting victim, a mom whose son was murdered and a woman who was almost killed from a domestic violence situation. All three testimonies came from people who live in Troup County.

“We need to recognize that we need to communicate to the community the resources we have for victims of violence and bring support and comfort to them,” said LaGrange Public Safety Chief Lou Dekmar. “We need a community spirit of support and a renewed commitment to work to reduce crime and stop the violence that occurs, particularly when it affects our young people.”

“I think it was good to acknowledge the victims and their families in what they’re going through in their loss,” said Troup County Sheriff James Woodruff.

Cummings brokered peace agreements between rival gangs in one of Georgia’s most dangerous maximum security prisons. He said 12 men of different gangs, races and faiths signed a peace pledge and then met once a week to work on getting past their differences.

The peace pledge worked, he said, and that same year the prison was recognition as institution of the year.

He now takes the Power of Peace Project on the road — speaking in schools, community events and prisons around the world. So far, he’s been to four continents and 30 different states.

“There are things that can bring us together and that can bridge that divide. We have a mission of peace.”

The same mission the Troup County Anchor Foundation and law enforcement officials hope the community learned more about on Saturday and will continue to stand behind and fight for in their neighborhoods.

“I think any time you bring awareness to an issue, it is helpful,” Dekmar stated.

“The program is one part of the puzzle,” said Woodruff. “We also have to have community involvement … everyone from business owners to all religious leaders. Everyone needs to come together and unite to make this a better place to live. We (the Sheriff’s Office) work together with the police and have one common goal to make this community a better place for our citizens to live.”