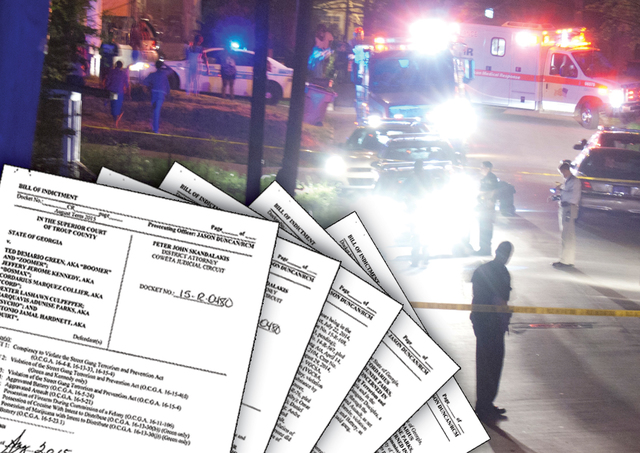 A Troup County grand jury indictment alleges a conspiracy among multiple suspected gang members to assault and disfigure a man in February.

The indictment alleges that on Feb. 13, the six men lured another man to a LaGrange residence after they suspected he had stolen drugs — and possibly money — from them. They beat the man “malicously (causing) bodily harm … and depriving the victim of his use of his legs … (and) seriously disfiguring said victim’s body by shooting (him) in the thigh, pelvis and buttocks,” according to the indictment.

According to police, Green was a one of the leaders of the Gangster Disciples street gang when he lured the victim to a home in the 100 block of McGee Street, where they accosted and shot him multiple times below the waist. The man was airlifted to an Atlanta hospital, where he was treated and eventually released.

The man eventually regained use of his legs, but remains partially disfigured, according to a prosecutor familiar with the case.

Green is being held in jail on a $1 million bond pending trial.

At a May meeting of the LaGrange City Council, Ray Mayer, assistant district attorney for the Coweta Judicial Circuit, told council members of the area’s impending problems with street gangs.

“We do have a serious problem here in Troup County, but that’s not unusual,” said Mayer. “There’s been a remarkable increase of gangs nationwide and in the southeast region.”

“They’re very violent,” he said of the gangs. “… They are at war with each other, and at war from within.”

In 2013, the Troup County district attorney’s office handled 123 gang-related cases, Mayer said. The D.A.’s office closed 57 of them, all of which led to guilty pleas before trial.

Fifteen other individuals are also named as part of the conspiracy case — all alleged Gangster Disciples. Many of them have pending or closed cases, the indictment shows. Their crimes range from burglary to aggravated assault to murder, according to the 27-page indictment.