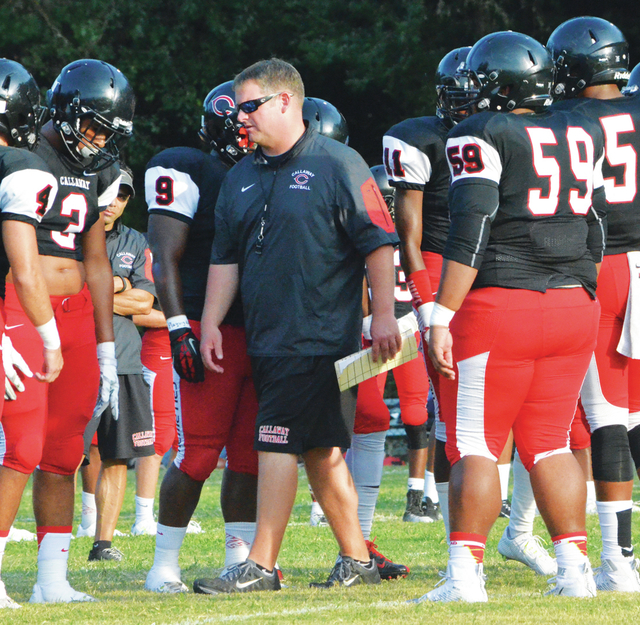 LaGrange’s Dialleo Burks is one of 13 head coaches in Georgia who also played in the NFL. Kevin Eckleberry | Daily News

http://lagrangenews.com/wp-content/uploads/sites/37/2015/08/web1_8-18-burks.jpgLaGrange’s Dialleo Burks is one of 13 head coaches in Georgia who also played in the NFL. Kevin Eckleberry | Daily News LAGRANGE – Out of the hundreds of head football coaches in Georgia, only 13 of them can list “NFL player” on their resume.

LaGrange High’s Dialleo Burks is one of them.

Burks is likely the only head coach in the state who can say he played in the NFL, NFL Europe, the XFL, and the Arena Football League.

Burks was part of all of those leagues during a professional playing career that lasted more than a decade.

In 2000, Burks appeared in one regular-season game, and while he didn’t have a catch, he returned a kick for 25 yards.

Burks had his most success as a pro in the Arena Football League where he had the bulk of his 389 career catches and his 107 touchdowns.

Burks also played for two seasons in NFL Europe with the Rhein Fire, and he also played in the XFL with the Orlando Rage.

In Burks’ first season with the Panthers, he had one memorable moment that came in the latter stages of a preseason game against the Steelers.

“The first preseason game I played, I didn’t play until the last two minutes of the game,” Burks said. “There was 2:46 left to go in the game. We were losing. They called my number.”

Burks’ quarterback that day was Dameyune Craig, the former Auburn standout who spent four seasons with the Panthers.

Craig led the Panthers on an 86-yard drive for the go-ahead touchdown in a 20-13 victory.

“We went down, me and Dameyune Craig, and hit a couple of passes, and we pulled the game out,” Burks recalls. “Slowly but surely after that, I started to see more reps.”

Burks, after helping LaGrange win a state and national championship in 1991, played at Eastern Kentucky for four seasons before beginning an outstanding professional career.

After his one season in the XFL, Burks joined the Dallas Desperados of the Arena Football League in 2002, and that’s when his career took off.

After his final season as a player in 2007, Burks turned to coaching, and he was an assistant coach with the Georgia Force in 2008.

Following stints as an assistant coach at LaGrange College, Troup High and LaGrange High, he spent one season as the head coach at Lafayette High in Alabama before returning home to become LaGrange’s head coach in 2014.

As a LaGrange player, Burks was a part of an extremely special team in 1991.

That team not only went 15-0 and won the state championship in the highest classification in Georgia, but it was tabbed by USA Today as the best high-school team in the country.

Burks said he has had some good-natured arguments with defensive coordinator Marvin Kendricks, who was a part of the 2001 LaGrange team that went unbeaten and won a state title.

IMPACT PLAYERS: Dre Martin has done a little bit of everything during his time as a Callaway football player.

He has been a defensive standout at multiple positions, and he has also been an impact player on offense, most notably as a quarterback.

This season, Martin is being asked to take on a new role as a wide receiver, and if Friday’s preseason game against Greenville was an indication, he is going to be an integral part of the Callaway offense.

Martin caught two first-half touchdown passes from quarterback Dylan Johnson, who was filling in for Braylon Sanders, who didn’t play because of an injury.

Callaway head coach Pete Wiggins said Martin put in a lot of work during the summer preparing for his new role.

Martin has also made the move to free safety on defense, so he had plenty to work on in the offseason.

“Dre has had a great summer,” Wiggins said last week. “He has worked hard in the weight room. He has really developed as a wide receiver, and he’s looking better each day at safety. I’m really proud of him.”

Martin, who is also a standout on the basketball team, is heading into his fourth season as a starter.

“Coming into his senior year, he’s a four-year starter,” Wiggins said. “Over the years, you don’t have a lot of guys that started all four years.”

Two other local wide receivers, one from LaGrange and one from Troup, also found the end zone in a preseason game last week.

LaGrange’s Mike Hardy got behind Newnan’s defense in the first half Friday night and caught a touchdown pass from LaPerion Perry.

The 6-foot-3 Hardy made some big-time plays as a junior, oftentimes going up into traffic and taking the ball away from defenders.

“He’s been offered by the University of Illinois,” LaGrange head coach Dialleo Burks said of Hardy. “That shows right there what he can do, the type of player that he can become, a Division I guy.”

The 6-foot-1 Tolbert went up and grabbed the ball while being closely defended, and he showed off his speed by going about 50 yards for the touchdown.

PUTTING THE TIME IN: Pete Wiggins is heading into his 11th season as Callaway’s head coach, making him one of the longest-tenured coaches in Class AAA.

Gerry Romberg is entering his 24th season as Westminster’s head coach, and he is tops when it comes to seniority among Class AAA coaches.

Next on the list is Ulysses Hawthorne, who has led the Beach program for the past 17 years.

Hal Lamb is also heading into the 17th season of a remarkably successfully stint as Calhoun’s head coach.

Eric Williams is in his 12th season as Jackson’s head coach, and Appling County’s J.T. Pollock, Tim Adams of Jenkins and Wiggins are heading into year number 11.

Wiggins has an 81-37 record at Callaway, and he has led the team to the state playoffs nine straight years.

Callaway’s best season under Wiggins came in 2013 when the team went 12-2 and reached the state semifinals.

Wiggins is only the third head coach Callaway has ever had.

Sonny Cummings, after eight seasons as Hogansville’s head coach, led the Callaway program from 1996 to 2001.

Claude Giddens took over as the head coach in 2002, and he led the program for three years before turning the keys over to Wiggins.

While Callaway has been able to pencil Wiggins in as the head coach since 2005, Troup has had five different head coaches during that same span, six if you count Shawn Sutton, who was hired in February but resigned in April before actually working with the team.

Tommy Walburn’s fifth and final year as Troup’s head coach was in 2005.

Bubba Jeter began his second stint as Troup’s head coach in 2006, and he remained in that position until 2009.

Charles Flowers was Troup’s head coach in 2010 and 2011, and he was replaced by Lynn Kendall, who led the program the past three seasons.

After Sutton resigned, former Manchester coach Tanner Glisson was hired in May, and he’ll lead the team this fall.

LaGrange is on its third head coach since 2005.

Donnie Branch was LaGrange’s head coach from 2011 to 2013, and Dialleo Burks is heading into his second season as head coach.