New season begins with a bang 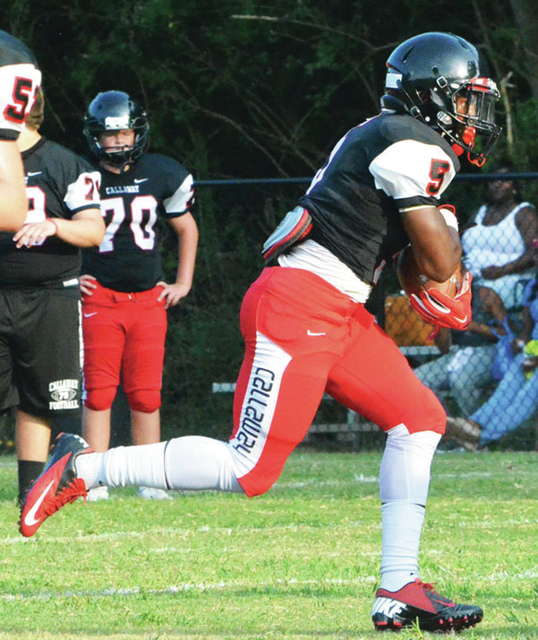 LaPerion Perry and the LaGrange Grangers will open the season against the Callaway Cavaliers on Friday. Kevin Eckleberry | Daily News

http://lagrangenews.com/wp-content/uploads/sites/37/2015/08/web1_8-17-LHS.jpgLaPerion Perry and the LaGrange Grangers will open the season against the Callaway Cavaliers on Friday. Kevin Eckleberry | Daily News Running back Cedric Maynard and the Callaway Cavaliers will try to beat LaGrange for the second straight year. Kevin Eckleberry | Daily News

http://lagrangenews.com/wp-content/uploads/sites/37/2015/08/web1_callaway2.jpgRunning back Cedric Maynard and the Callaway Cavaliers will try to beat LaGrange for the second straight year. Kevin Eckleberry | Daily News

LAGRANGE – The LaGrange Grangers looked to be on their way to a season-opening win against the Callaway Cavaliers.

Halfway through the fourth quarter of last year’s game, LaGrange was holding a 14-0 lead, and Callaway’s high-powered offense hadn’t been able to find its footing.

The Cavaliers scored touchdowns on their final two possessions of the fourth quarter to tie it at 14-14, and it was on to overtime.

LaGrange was unable to score on its first overtime possession, meaning all Callaway had to do was make a field goal or score a touchdown to win it.

Callaway didn’t mess around with a field-goal attempt.

Quarterback Dre Martin scored on a 4-yard touchdown run to send Callaway to a 20-14 victory.

It was the first time LaGrange and Callaway had played in more than 10 years, and it was worth the wait.

On Friday, those two teams will meet again, and Callaway will try to even up the all-time series.

LaGrange beat Callaway in 2002 and 2003 before coming up just short a year ago.

For the second straight year, the showdown between Callaway and LaGrange will mark the opening of a new football season in Troup County.

LaGrange will be the home team this year, and kickoff is set for 7:30 p.m.

LaGrange and Callaway both tuned up for the season opener by playing preseason games last week.

“Now, the scrimmage is over, and it’s the real deal,” LaGrange head coach Dialleo Burks said.

While Callaway and LaGrange will get the regular season under way this week, Troup has one more preseason game to play.

After playing Spencer last week, Troup will be back home on Thursday for a preseason game against Upson-Lee.

That will be the final tune-up for Troup, which plays its regular-season opener on Aug. 28 against LaGrange.

Troup will be looking for a third consecutive win over LaGrange.

Also this week, the Lafayette Christian School Cougars will get their season started.

Lafayette Christian is playing eight-man football again this season, and it is part of the Georgia Independent Christian Athletic Association.