Softball teams get their swings in 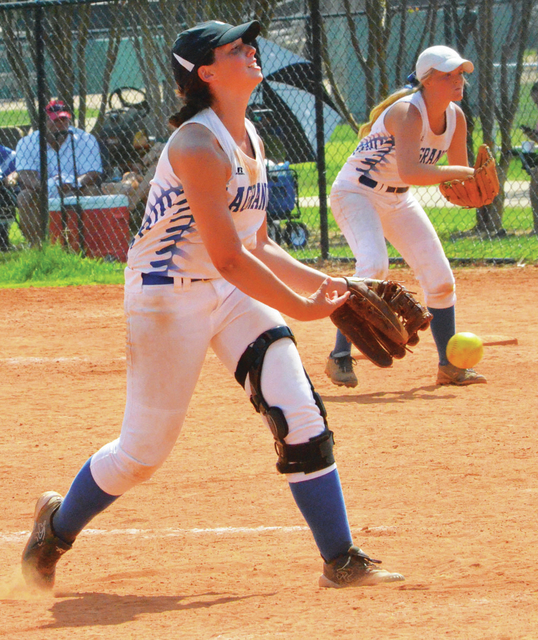 Troup’s Hannah Conaway puts the ball in play during a game against Northside on Saturday. Troup went 3-2 in the Callaway Classic. Kevin Eckleberry | Daily News

http://lagrangenews.com/wp-content/uploads/sites/37/2015/08/web1_8-17-softball2-Conaway.jpgTroup’s Hannah Conaway puts the ball in play during a game against Northside on Saturday. Troup went 3-2 in the Callaway Classic. Kevin Eckleberry | Daily News LaGrange’s Shaq Sutton rounds third on the way home with one of her team’s two runs in a 9-2 loss to Callaway. Kevin Eckleberry | Daily News

http://lagrangenews.com/wp-content/uploads/sites/37/2015/08/web1_8-17-sutton.jpgLaGrange’s Shaq Sutton rounds third on the way home with one of her team’s two runs in a 9-2 loss to Callaway. Kevin Eckleberry | Daily News Troup third baseman Kayla Lane waits on a throw during a game against Northside on Saturday. Kevin Eckleberry | Daily News

http://lagrangenews.com/wp-content/uploads/sites/37/2015/08/web1_8-17-softball1-Kayla-Lane.jpgTroup third baseman Kayla Lane waits on a throw during a game against Northside on Saturday. Kevin Eckleberry | Daily News LAGRANGE – As they began play in the Callaway Classic, the softball teams from Callaway, LaGrange and Troup had played a total of three games between them.

By the time they finished play on Saturday, each of those teams had added a whole bunch of games to that total.

The tournament was held on Friday and Saturday at Shuford Fields, and each of the 15 teams involved played five games apiece.

Among the local teams, Callaway had the most success, finishing with a 4-1 record.

The Troup Lady Tigers posted a 3-2 record, and LaGrange went 2-3.

Callaway (4-2) opened play in the Callaway Classic with two games on Friday, and it won them both.

On Saturday, Callaway blanked Shaw 7-0 and lost to Bowdon 11-4 before finishing its tournament stay with a 9-2 win over LaGrange.

“Everybody got to play, some more than others, but everybody got in a game,” Summerlin said. “That’s the main goal and your focus coming in here. You want to make sure that everybody gets to play, and they did.”

Among the players who got plenty of time on the field over the weekend were four freshmen who’ll be a critical part of the team this season.

One of those freshmen, Mallory Gallaway, was the winning pitcher in the win over LaGrange.

The other freshmen are Jasmine Dukes, Lydia Bartlett and Oeisha Jenkins.

“They’ve done well,” Summerlin said of the freshmen. “They’ve really grown up, and they’ve got a lot of room for improvement. What they’ve done from the last Friday (in a season-opening loss to LaGrange) to this weekend, and just kind of figuring out the game, and figuring out this is how things are supposed to be done, they’re doing it right. We just have to keep working.”

In their 3-1 win over Northside, the Lady Cavaliers scored two runs in the first inning, and one more in the third, and that was plenty of support for pitcher Jessica Perkins.

Perkins also had three hits including a double, and Keshonna Terrell had two hits.

In a 15-0 win over Jordan, Brittany Mitchell had three hits, and Terrell, Skylar Rice, Jenkins and Gallaway each had two hits.

Jenkins was the winning pitcher.

In the 7-0 win over Shaw, it was a tight game until Callaway scored four runs in the fifth inning to extend the lead to seven.

Jenkins, who was the winning pitcher, had an RBI hit in the inning, and Rice, Bartlett, and Jasmine Dukes all reached base and scored runs.

Mitchell had a hit and scored a run in the third inning.

Against Bowdon, Callaway scored three runs in the second inning, but not much else went right in the 11-4 loss.

Bowdon went on to lose to Heard County for the tournament championship.

Callaway bounced back from the Bowdon loss and beat LaGrange 9-2 in a game shortened to five innings because of time limitations.

Trailing 2-0, Callaway took a lead it wouldn’t relinquish with five runs in the second inning.

Molly Hubbard had a two-run base hit in the inning, and Bartlett had an RBI single.

Jenkins, Gallaway and Dukes also had hits in the inning.

In a three-run third inning, Kelly Carlisle had an RBI single, Gallaway had an RBI groundout, and Bartlett drove in a run when she walked with the bases loaded.

It was a successful tournament for Troup, which went 3-2 and beat rival LaGrange 9-7 along the way.

“We’d only had one regular-season game, so we really needed some games,” Troup coach Blair Shimandle said. “We needed a chance to play a lot of games together, so we can really see what we have. We had an opportunity to get some other girls in, too. That helped.”

The LaGrange game was one of three Troup played on Saturday.

Senior Libby Wheeler was one of the offensive heroes during the LaGrange game with a pair of hits, including a three-run home run in the third inning.

Wheeler’s home run was the big blow in a six-run inning.

Abby Taylor was 2-for-2, and Hannah Conaway, Kinley Stanford, Kayla Lane and Madison McCartney each had a hit.

Hanna Lane was the starting and winning pitcher against LaGrange, and she also had a hit and two RBIs.

Amber Arnold did a lot of damage in the game with two hits, including a three-run home run, and she had five RBIs.

Maddie Weathers was 3-for-4, Kayla Lane was 2-for-3 with two RBIs, Wheeler had a double and an RBI, and Hanna Lane had two hits.

Taylor was the winning pitcher.

Troup completed its tournament with a 12-0 loss to Northside, and Arnold and Weathers each had a hit.

Conaway had a hit and two RBIs, and Arnold had a hit, three walks, and she scored three runs.

Hanna Lane had a hit and two RBIs, and Taylor was the winning pitcher.

In Troup’s second game on Friday, it took on a powerhouse Heard County team that won a state championship last season and is favored to win another one this year.

Hanna Lane and Kayla Lane each had a hit.

After winning two of its first three games, LaGrange finished its stay in the Callaway Classic with losses to its county rivals.

After losing to Troup 9-7 on Saturday, LaGrange fell to Callaway 9-2 in its tournament finale.

In the Callaway game, LaGrange led 2-0 after scoring twice in the bottom of the first.

Lauren Kuerzi had an RBI double, and Leighton Parked knocked in a run with a single.

Callaway took control with five runs in the second inning, though.

Against Troup, LaGrange was trailing 9-2 when it scored five runs in the bottom of the third to make it interesting, but Troup held on.

The game only lasted four innings since there was a 90-minute time limit for each of the games.

Shaq Sutton and Destiny Fitzpatrick each had two hits for LaGrange against Troup, and Miranda Hamer had an RBI.

In its first game on Saturday, LaGrange handled Hardaway 15-6, with Kuerzi leading the way with four hits and six RBIs, and Parker had two hits.

Hamer knocked in a pair of runs.

Hannah Karcher was the starting and winning pitcher for LaGrange.

Kuerzi had three hits, and Sutton and McLain Skinner each had two hits.

Hamer had a hit and a walk for LaGrange.