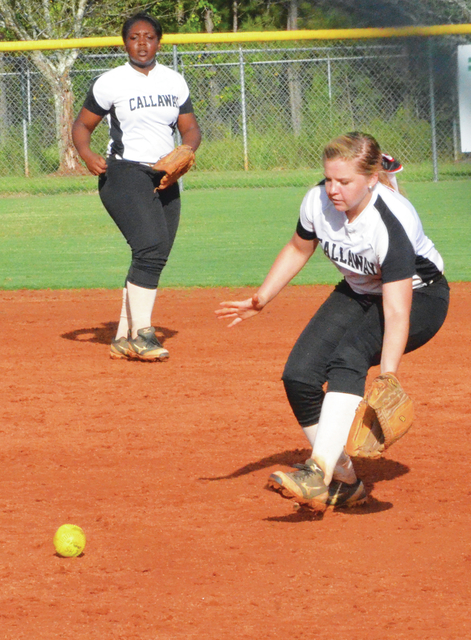 HOGANSVILLE – Heard County, fresh off a championship performance in the Callaway Classic over the weekend, kept things rolling on Tuesday with a 15-2 victory over the Callaway Lady Cavaliers.

Callaway pushed a pair of runs across in the bottom of the fourth inning to make it an 8-2 game, but Heard County put it away with seven runs in the top of the fifth.

Heard County, which won a state championship last season, is off to a 6-0 start this season, and it is ranked first in the most recent Class AA poll.

Even at full strength, it would have been a difficult game for the Lady Cavaliers, but they were having to play without their number one pitcher, senior Jessica Perkins who is out with an injury.

Freshman Mallory Gallaway, who was the winning pitcher in Saturday’s win over LaGrange, got the start for Callaway on Monday and she pitched into the fifth inning.

Heard County’s outstanding senior pitcher Jordan Watson, who had a dominant 2014 season, got the win.

Callaway did all of its offensive damage in the fourth inning.

After Brittany Mitchell and Keshonna Terrell walked, Jenkins put Callaway on the board with an RBI single, and Rice followed with a run-scoring base hit of her own.

Callaway (4-3 overall), which was coming off an impressive 4-1 performance in the Callaway Classic, will continue its non-region schedule with a game at Troup today at 5:30 p.m.

Callaway will then host Hardaway on Monday before beginning its Region 5-AAA schedule on Tuesday at Pepperell.

Callaway finished fourth in the region a year ago before falling to Calhoun in the opening round of the state playoffs.

Callaway coach Ashley Summerlin said before Monday’s game that facing a pitcher of Watson’s caliber would be beneficial for his team.

“We need to see that girl pitch, because that’s what we’ll see when we play region games,” Summerlin said.