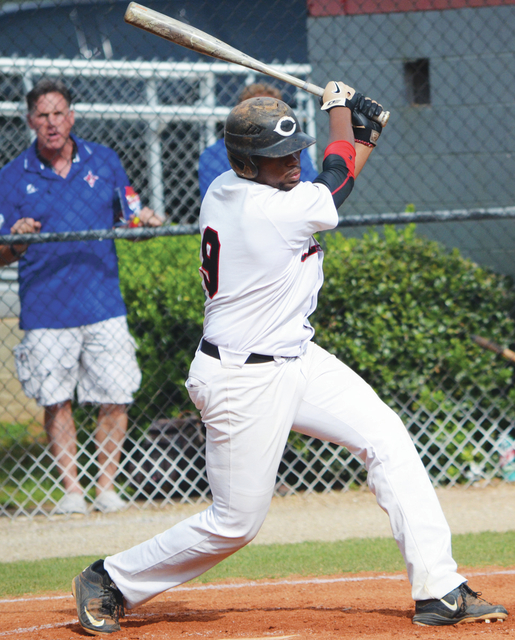 Callaway’s Cortney Laye, left, delivers a block during practice on Tuesday. Laye is an anchor on the offensive line for the Cavaliers, who open their season against LaGrange on Friday. Kevin Eckleberry | Daily News

http://lagrangenews.com/wp-content/uploads/sites/37/2015/08/web1_8-19-laye1.jpgCallaway’s Cortney Laye, left, delivers a block during practice on Tuesday. Laye is an anchor on the offensive line for the Cavaliers, who open their season against LaGrange on Friday. Kevin Eckleberry | Daily News HOGANSVILLE – When the Callaway Cavaliers scored on the first play of Friday’s preseason game against Greenville, it wasn’t Cortney Laye’s name that was called or that appeared in the sports section the next day, and he was fine with that.

Laye, a senior, is a three-year starter, and he’s the anchor of Callaway’s offensive line.

Callaway got the ball at the start of Friday’s game, and on the first play, the offensive linemen opened up a hole, and senior running back Cedric Maynard ran through it and took off on a 70-yard touchdown run.

While everyone watched Maynard out-race the Greenville defense, Laye and the other offensive linemen stayed behind after doing their job.

Laye said the thanks and gratitude he and the other offensive linemen receive from the running backs is praise enough.

“I really get it from my running backs and fullbacks,” Laye said. “Those guys, they really know that we made our blocks and opened those holes. Cedric, he does a great job, and Tyrek (Frazier) too. Both of them let us know that we did our job.”

While the contributions Laye makes might not always get noticed by the fans, head coach Pete Wiggins appreciates what the senior does.

Wiggins is not only the head coach, but he also coaches the offensive linemen, so he has worked extremely closely with Laye over the years.

“Since I’ve been coaching ball, he’s one of the top offensive linemen that I’ve coached,” Wiggins said after Tuesday’s practice in preparation for Friday’s showdown against LaGrange. “He just does a great job on the field as a leader, and he’s a great technician. He’s what we want on the offensive line.”

Laye’s first season as a starter came in 2013, and he helped Callaway win a region championship and advance to the final four for the first and only time in school history.

Laye was the young guy on the offensive line that season, and he learned a lot from then senior Brandon Sutton, who was himself a three-year starter.

Now the situation has been reversed.

Laye is the starter, the man who has been through so many Friday-night battles, and he’s working with some inexperienced offensive linemen, including a freshman in Keiondre Jones who was in the starting lineup against Greenville.

“I know what it was like when I was a sophomore and I played beside Brandon Sutton,” Laye said. “That was a guy that really helped me out.”

Laye said he is looking to be that same sort of mentor to Jones.

“I tried to take him, and teach him everything I know and just try to make him the best player he could be,” Laye said.

The 6-foot-3 Laye has put in the time it takes to be an elite offensive lineman, not just during the season, but during the summer as well.

One of the things Laye has done each of the past three summers has been to participate in the Mike Hodges offensive line camp.

Wiggins takes a big group of linemen to the camp each year, and Laye said it has made him a better player.

“That’s one of our best camps,” Laye said. “It really gets you better. It teaches you all the fundamentals of the O-line.”

Wiggins said Laye is a versatile player who “can play any position on the offensive line.”

“He can play tight end, defensive line, and he puts 100 percent into it,” Wiggins added. “That’s in the weight room, that’s in the class room, and it’s out here on the field.”

Callaway’s offensive line, despite being short a couple of players last week because of injuries, performed well against Greenville.

It’s an offensive line with a handful of new starters this season, and Laye said everyone is committed to getting better.

Laye will be on the field on Friday when his Cavaliers take on the Grangers for the second straight year.

Last season, Callaway trailed 14-0 in the fourth quarter before rallying for a 20-14 victory in overtime.

Laye said the games against LaGrange and Troup are so enjoyable because of the familiarity he has with the players on the opposite sideline.

“Those games are a lot of fun,” Laye said. “Guys you grew up playing rec ball with, now they’re on the other side of the ball, and you get to play against them. It’s a lot of fun.”

While fully focused on making the most of his senior season, Laye knows that at some point he’ll have to make a college decision.

Laye will have an opportunity to play college football, and he would also like to play baseball on the next level.

Laye is an exceptional baseball player, and he helped Callaway win a region championship and advance to the state quarterfinals last season.

“I’ve really thought about that,” Laye said. “My primary right now is probably football, but wherever I go, I want to try to play baseball, too.”