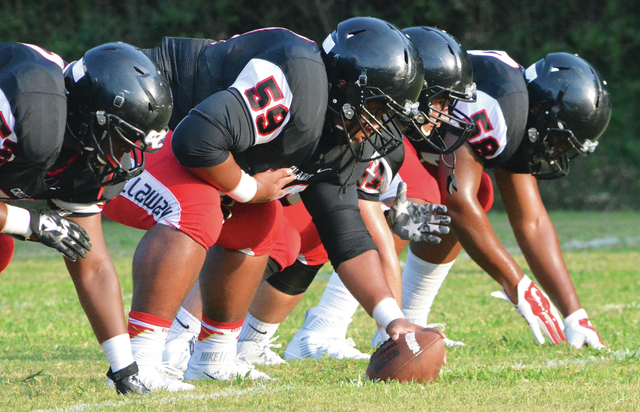 Quarterback Braylon Sanders and the Callaway Cavaliers will try to beat the LaGrange Grangers for the second straight season. Kevin Eckleberry | Daily News

http://lagrangenews.com/wp-content/uploads/sites/37/2015/08/web1_8-20-CHS-sanders.jpgQuarterback Braylon Sanders and the Callaway Cavaliers will try to beat the LaGrange Grangers for the second straight season. Kevin Eckleberry | Daily News Callaway’s offensive linemen get in position before the snap during last week’s game against Greenville. Kevin Eckleberry | Daily News

http://lagrangenews.com/wp-content/uploads/sites/37/2015/08/web1_8-20-CHS1.jpgCallaway’s offensive linemen get in position before the snap during last week’s game against Greenville. Kevin Eckleberry | Daily News

HOGANSVILLE – It looked like the Callaway Cavaliers were going to have to wait at least another year to get their first ever win against the LaGrange Grangers.

After not playing since 2003, LaGrange and Callaway got together a year ago in the first game of the season.

LaGrange, which had beaten Callaway in the only two previous games between the programs, had a 14-0 lead midway through the fourth quarter of last season’s game.

Callaway’s players never wavered, and they kept believing they would find a way to win.

“The tradition we’ve built when we go on the field, we expect to win, regardless of the situation or the opponent,” Callaway coach Pete Wiggins said. “Out here at practice, we try to put them in hard situations so when they get to that on Friday night, they’ll be ready for it.”

With quarterback Dre Martin leading the way, Callaway scored a pair of fourth-quarter touchdowns to pull even at 14-14, and it was on to overtime.

After the Grangers failed to score on their first overtime possession, the Cavaliers won it 20-14 on a touchdown run by Martin.

“Last year was a great matchup,” Wiggins said. “It went to overtime, and I was really proud of the way our kids persevered, and just kept fighting until the end and were able to come away with a win. All the work in the preseason, and in the weight room, you see it pay off in a big game like that. Again, I’m just proud of the commitment from our kids.”

On Friday, at what will likely be a packed Callaway Stadium, Callaway will try to make it two in a row against LaGrange, and Wiggins is expecting a big-time challenge.

“They’ve got a lot of play-makers on offense, and their defense is strong, it runs to the ball well,” Wiggins said of the Grangers. “It’ll be a physical game, and the team that makes the fewer mistakes will probably win. We just have to go out and play like we’ve been practicing and work hard and do what we do.”

Callaway tuned up for the LaGrange game by beating Greenville 57-21 last week in Hogansville.

It was an impressive all-around performance.

Offensively, even though quarterback Braylon Sanders was out with an injury as were a couple of the starting linemen, the Cavaliers had no problem moving the ball.

Senior running back Cedric Maynard had a pair of touchdown runs, including a 70-yard scoring run on the first play of the game.

Tyrek Frazier also had a long touchdown run, and Dylan Johnson threw a pair of scoring passes to Martin, who has moved from quarterback to wide receiver this season.

Greenville did have a pair of long touchdown passes in the first half when the starters were in the game, but Callaway’s defense didn’t allow much beyond that.

“We played with really good effort Friday night, and that always makes a coach proud,” Wiggins said. “There are a lot of things we can do better. There are a lot of holes to fill from last year. We come away from that game learning a lot about ourselves, but learning that we’ve got a long way to go.”

Friday’s game is the start of an intriguing non-region schedule for Callaway.

After a home game against B.E.S.T. Academy, Callaway will play Heard County, Harris County and Troup.

A year ago after beating LaGrange, Callaway lost to B.E.S.T, Harris County and Troup and beat Heard County.

“Most of those teams are in the back yard with Troup, LaGrange and Harris County and Heard,” Wiggins said. “People from the communities know one another, and kids know one another. I think that makes for a big atmosphere on Friday night.”