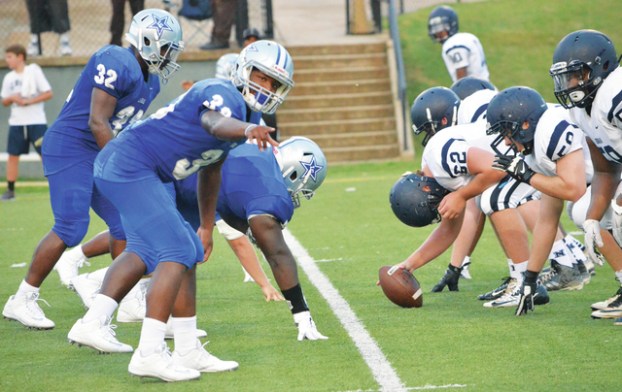 LAGRANGE – The play was going nowhere.

The LaGrange Grangers were backed up deep in their own territory in Friday’s preseason game against Newnan, and quarterback LaPerion Perry managed to elude some would-be tacklers, and he ran 17 yards for a first down.

It’s that sort of play, the ability to make something out of nothing, that makes Perry such a dangerous player, and it’s why he’ll be a critical piece of the offensive puzzle for the Grangers this season.

LaGrange scored two touchdowns in the 14-13 loss to Newnan, and both of those scoring drives were led by Perry.

LaGrange went 84 yards for a touchdown in the first half, and Perry had runs of 17 and 23 yards on that drive.

He also completed two passes for 41 yards, including a 20-yard scoring pass to Mike Hardy.

At the start of the second half, LaGrange went 81 yards for a touchdown, and once again Perry came through with some big plays, including a 26-yard run, and a 14-yard completion to Kimani Barnes.

Barnes, a senior running back, capped that drive with a 1-yard touchdown run.

“You see what LaPerion brought, that excitement,” Burks added. “That’s not saying Amad didn’t bring that, but LaPerion is one of those kids when he touches it, he can be standing in the end zone. We love to bring that level of excitement to the game. And the players, they feed off of it.”

In the months leading up to this season, Perry has worked closely with quarterbacks coach Matt Neighbors, and he looked extremely comfortable running the offense on Friday.

On his scoring pass to Hardy, Perry had the option to run or throw, and he obviously made the right decision.

“He showed great vision,” Burks said. “We love for him to read it like he did. He always has the run-pass option.”

Perry also showed nice touch on completions to Barnes and Dexter Gates, who made a terrific catch in traffic for a first down.

As for Ogletree, Burks said whether he’s playing quarterback or not, he will find a way to get him involved.

“He’s going to show his versatility,” Burks said. “We’re going to have him at some other spots.”

There were other offensive highlights as well, including a solid performance by an offensive line that is without senior Luke Elder, the all-state lineman who is out of action after undergoing knee surgery.

Elder, who has verbally committed to North Carolina, injured his knee in the spring game.

“That was versus a very good group, and athletic,” Burks said of Newnan’s defensive front. “It was a really good test.”

As for the running game, Barnes showed how strong of a runner he can be on the scoring drive in the second half when he carried the ball five times for 33 yards and also had a reception.

On the scoring play, Barnes took a handoff from the 1-yard line and bulled through Newnan’s starting defense for the touchdown.

“James Clark ran very well, and Kimani Barnes came in and ran hard,” Burks said. “Jeremiah Wright, he ran well. We’re still waiting on (Undriel) Copeland to get back and get healthy. When we get him back, that’s another power guy that’s going to be in the mix. We have a pretty good stable.”

As for the wide receivers, Burks said “they made plays when we did pass it,” which wasn’t very often.

LaGrange’s first-team defense gave up some yards, but it limited Newnan to one touchdown.

“We played hard and ran around,” Burks said. “That’s what we wanted to do. We played base. We wanted to see who was going to show up and play. There were a lot of guys chomping at the ankles as far as playing time, so we said let’s just let them play it out.”

LaGrange also showed it should be in good shape when it comes to the kicking game.

CJ Harman did a nice job on punts, and Matthew Thomas made his lone extra-point attempt and did well on kickoffs.

“We’re blessed that we’ve got two guys that can do it,” Burks said of the kickers.

With the Callaway game coming up this week and the Troup game to follow, Burks said it was nice to get out on the field and play someone else.

“It was good. It was a fun time for them,” Burks said. “It was good to get back on the field under the lights and go at it.”

Now, the games start to count, and the Grangers jump into a new season by playing their two county rivals.

After playing Callaway this week, LaGrange will take on Troup next week.

Those are two big-time games right out of the gate for the Grangers.

“You kind of wish they were more spread out, but a championship team, it doesn’t matter who you play, or who you’re playing,” Burks said. “I remember my senior year, our first six ballgames, four of them were in the top 10 in the state. You want the best.”

Burks said the key for the players is to make sure they don’t look too far ahead.

“Win every play,” Burks said. “We want to focus on winnig each play. If you win every play, you win the game.”