Tigers get back on the field for second preseason game 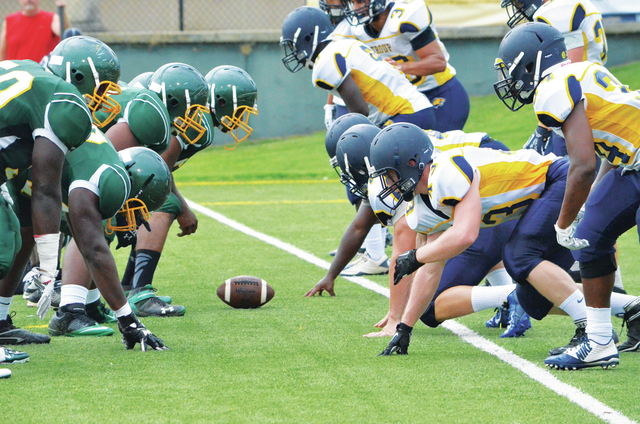 The Troup Tigers will host Upson-Lee today for their second and final preseason game. Troup will open its season next week against LaGrange. Kevin Eckleberry | Daily News

The Troup Tigers will host Upson-Lee today in the second of two preseason games in preparation for next week’s season opener against the rival LaGrange Grangers.

Last week, Troup hosted Spencer, and it was a tough night for the home team.

Spencer dominated the action and won 33-15 over a Troup team that was short-handed with some key players unable to play because of a suspension.

Troup will look to tighten things up today before the regular season gets under way.

“We want to make sure we’re in good shape leading up to that game on Aug. 28 against that team from across town,” Troup head coach Tanner Glisson said.

In last week’s game, Spencer scored a touchdown on its first possession after forcing a Troup punt, and it went on to add two more scores in quick succession.

The Tigers were trailing 20-0 when they got on the board with Ken Truitt throwing a 72-yard touchdown pass to Tremayne Tolbert.

The Tigers’ other touchdown came on a recovered fumble in the second half, and they also got two points on a safety to get within 11 late in the third quarter.

Spencer got a 75-yard touchdown run as the third quarter expired to cap the scoring.

It was the debut for Troup head coach Tanner Glisson, who spent the previous two seasons as the head coach at Manchester.

Glisson, who wasn’t hired until May, knows there’s work to do.

Troup, which went 3-7 a year ago, has had to replace a bunch of starters, including nine on defense.

Troup has more returning players on offense, although the team is having to replace three offensive linemen in Mitch Mathes, Jason Hernandez and Tristan Thompson who are now playing college football.

Troup also has a new quarterback after three-year starter Will Smith graduated.

Truitt and Montez Crowe took the snaps at quarterback against Spencer when the starters were in the game.

Truitt, who Glisson believes has the ability to play quarterback in college, had some explosive plays on the ground and through the air, including the touchdown pass.

“The game is going to slow down for him,” Glisson said. “It’s our job to slow it down a little bit.”