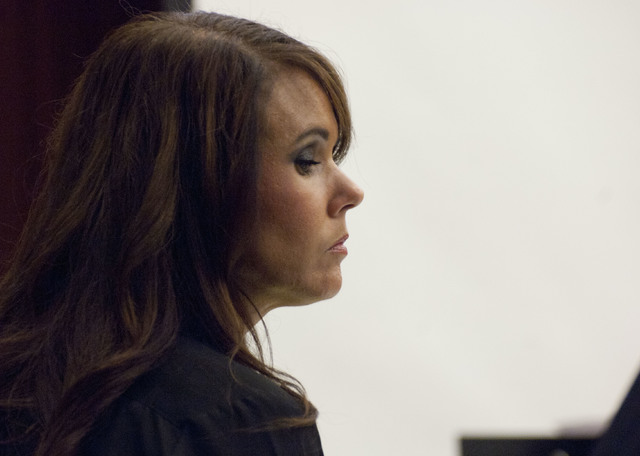 William Grizzard, a now-retired investigator of the Troup County Sheriff’s Office, listens to defense attorney Stacey S. Jackson on Wednesday in Troup County Superior Court during the arson trial of Dana M. Owens, 39, of West Point. Owens faces two counts of arson for allegedly trying to burn down her home for insurance money in January 2013.

http://lagrangenews.com/wp-content/uploads/sites/37/2015/08/web1_WEBArsonTrial01.jpgWilliam Grizzard, a now-retired investigator of the Troup County Sheriff’s Office, listens to defense attorney Stacey S. Jackson on Wednesday in Troup County Superior Court during the arson trial of Dana M. Owens, 39, of West Point. Owens faces two counts of arson for allegedly trying to burn down her home for insurance money in January 2013. Dana M. Owens, 39, stands trial Wednesday in Troup County Superior Court for two counts of arson. Owens allegedly tried to burn down her home in 2013 for insurance money, according to prosecutors.

http://lagrangenews.com/wp-content/uploads/sites/37/2015/08/web1_WEBArsonTrial02.jpgDana M. Owens, 39, stands trial Wednesday in Troup County Superior Court for two counts of arson. Owens allegedly tried to burn down her home in 2013 for insurance money, according to prosecutors.

Prosecutors say Dana M. Owens, 39, was facing financial and marital problems in January 2013 when she intentionally set a fire in her home’s pantry, hoping raze the house and rake in a homeowners insurance claim. The fire did not spread past the pantry and caused relatively minor damage to the home.

On the evening of the fire, Owens said her husband, who was out of town, received a call from an automatic alarm company that notified him of a possible fire in the home, located at 3016 Georgia Highway 18 outside West Point. Smoke was detected, the company told him. Owens’ husband called her and she went to the home, according to her defense.

Owens told investigators that when she arrived, she went into the home and removed several items of personal and sentimental value — wedding and baby photos, clothes, china — and put them in a barn about 100 yards from the home.

Grizzard told the court that a firefighter and three witnesses who were present at the fire never saw Owens going back and forth from the house to the barn. He also described a mountain of personal items found in the barn — items ranging from hair driers to cameras to clothes still on hangers. There was a suitcase packed and filled with clothes, Grizzard testified. Two guns had been removed from the home.

Before firefighters even left the home, Grizzard confronted the Owenses about the items in the barn. An audio recording of the conversation was played for jurors.

“I’m going to be real honest with you,” Grizzard told the couple as a firetruck’s diesel engine rumbled in the background. “A lot of that stuff in that barn looks like it came from the house.”

In the recording, Owens’ husband, who had arrived home by that point, then becomes agitated and angry with Grizzard and Owens immediately denies having started the fire. She claimed many of the items, including bills and other paperwork, had been removed from the house before the fire when she and her father were re-organizing an in-home office.

As the investigation progressed, Owens eventually agreed to take a polygraph lie-detector test; she failed it. Greg Corbett, who administered the test at the LaGrange Police Department for the sheriff’s office, testified he followed all of the proper procedures and the exam was given in accordance with best practices. The machine used by LPD is the same type of polygraph used by the federal government, he said. It had been calibrated less than a month prior, Corbett testified.

In a video and audio recorded interview with Owens immediately following the polygraph, she claims she doesn’t know how she failed the test and appears angry with Grizzard and Troup County Fire Capt. Kevin Norred as they question her.

“I have nothing to hide,” she said in the video, which jurors and the court saw.

Grizzard goes on to press her about a camera found in the barn after the fire. Investigators obtained a search warrant to view the contents of a compact flash card inside the camera and found itemized photographs of nearly every room in the house, Grizzard says to Owens in the video.

Owens had previously worked as an insurance agent — and another home she owned also burned to the ground in 2007. She told investigators that because she’d experienced the first fire, she kept photographs of the items inside her home, and also kept her valuables in the barn.

Grizzard asked Owens about her financial status and her bills. He wanted to know if she was having money problems to the point that she may have set the fire for an insurance check.

“We’re not Donald Trump, but we pay the bills on time,” she replied.

When asked about those bills, Owens says in the video she pays about $6,500 in mortgage payments each month and an additional $500 to $1,000 in utilities monthly, depending on the season. The home was built after the 2007 fire of the first house and is listed with the Troup County Board of Assessors as having cost $718,520. It is 5,392 square feet, records show, with eight bedrooms and four full baths.

She denied having financial problems, but according to records obtained by Grizzard through a search warrant, the Owenses were denied a loan for a new vehicle in the weeks prior to the fire. The home had also been on the market for a year before the fire and went unsold. The Owenses had also received a letter from their insurance company that informed them if they didn’t make a payment to their account, their homeowners insurance would be canceled Jan. 23 — about two weeks before the fire.

On the witness stand, Grizzard testified that the contents of the barn didn’t smell like house-fire smoke, which he said is unusual for items exposed to a structure fire.

On cross examination, Owens’ attorney asked Grizzard if he performed any type of smoke residue test on the items found in the barn, which Grizzard said he had not.

Owens’ attorney also pressed Grizzard about why he, as a seasoned investigator, had failed to document a conversation he’d had with a representative of the alarm company. During the conversation in question, the alarm company representative allegedly told Grizzard he had installed a satellite system with the fire alarm. It could not be disabled and would send alarms to the company even if the power failed or someone attempted to tamper with the alarm. The defense attorney made it clear for the jury that documentation of that conversation was lacking.

The prosecution rested its case Wednesday and the defense did not say whether Owens will take the witness stand today. Presiding Judge Travis Sakrison could send the jury for deliberations today if the defense rests and closing arguments are completed.

Read LaGrange Daily News online and in print for updates as this trial continues.