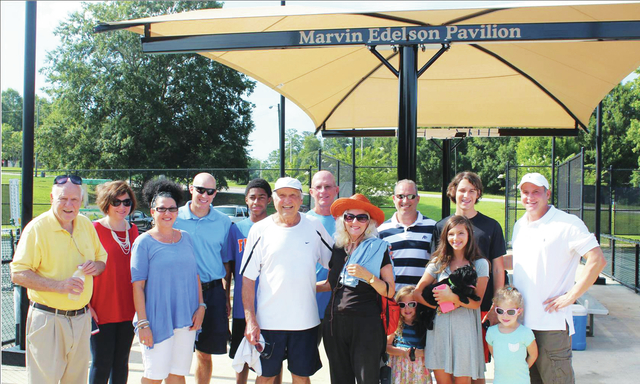 Marvin Edelson is surrounded by friends and family members during a dedication ceremony at the McCluskey Tennis Center. A new shade pavilion was named in honor of Edelson. Contributed photo

http://lagrangenews.com/wp-content/uploads/sites/37/2015/08/web1_8-21-tennis1.jpgMarvin Edelson is surrounded by friends and family members during a dedication ceremony at the McCluskey Tennis Center. A new shade pavilion was named in honor of Edelson. Contributed photo

LAGRANGE — When the players in this weekend’s USTA state tournament at the McCluskey Tennis Center need a place in the shade to escape the August sun, they’ll be able to go sit in the Marvin Edelson Pavilion.

The pavilion, which is named in honor of a man who has been a fixture in the local tennis community for decades, was recently dedicated during a ceremony at the tennis center.

Anita Holle of the Chattahoochee Area Tennis Association said it came as a surprise to Edelson, who thought he was participating in a ceremony for someone else.

“He’d been up here playing tennis this morning,” Holle said. “Everybody stopped to go down there, and the bleachers were full of people, and it was a nice day.”

Holle said Edelson’s family approached CHATA about doing something for him, and the decision was made to put in a shade canopy by the lower courts.

Karen Bryant, the organizer of this weekend’s tournament and a CHATA member, said it was a special moment.

“He saw it was his name, and he turned around, and the rest of his family was behind him,” Bryant said. “It was really neat.”

The pavilion will no doubt get used a lot this weekend.

The United States Tennis Association tri-level state tournament will begin at 8 p.m. today, and it will continue through Sunday.

The tournament will feature 42 teams and nearly 500 players, and seven of those teams will include players from this area.

This is the third straight year LaGrange has hosted this tournament, and Bryant said this is far and away the biggest field of those three years.

“They’ll be here from all over the state, and probably about 80 percent of them stay in the hotels here, they eat in the restaurants,” Bryant said. “They have a good time while they’re here. They enjoy coming to LaGrange very much.”

Since there are so many players, some of the matches will be played at Callaway High.

The winners in each of the divisions will advance to the sectional tournament.