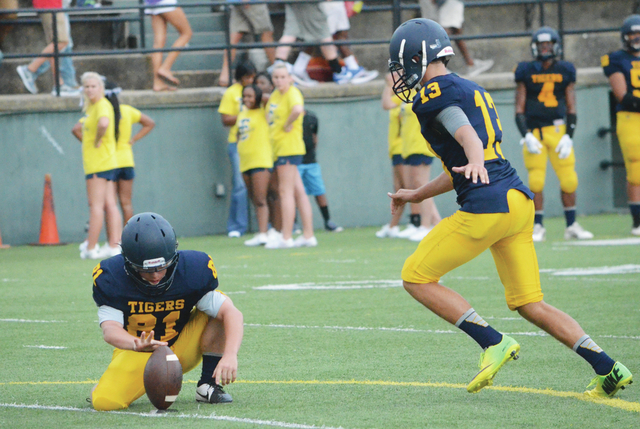 Troup’s defense makes a play during the first half of Thursday’s preseason game against Upson-Lee. Troup opens the season against LaGrange next week. Kevin Eckleberry | Daily News

http://lagrangenews.com/wp-content/uploads/sites/37/2015/08/web1_8-21-troup10.jpgTroup’s defense makes a play during the first half of Thursday’s preseason game against Upson-Lee. Troup opens the season against LaGrange next week. Kevin Eckleberry | Daily News LAGRANGE – As the Troup Tigers showed Thursday night against Upson-Lee, they don’t need to take much time off the clock to put the ball in the end zone.

The Tigers had two touchdown drives in the first half, and those two possessions combined took less than three minutes off the clock.

Troup and Upson-Lee tied 14-14 in a preseason game that was halted with 1:48 left in the first half because of lightning.

Since it was a preseason game and the forecast called for more bad weather, the decision was made to call the game at that point, and it finished in a 14-14 tie.

It was the last of two preseason games for Troup, which will open the regular season next week against LaGrange.

Running back Mess Bonner scored both of Troup’s touchdowns.

He had a 1-yard scoring run in the first quarter, and on what turned out to be the game’s final play from scrimmage, he beat the Upson-Lee defense for a 50-yard touchdown run.

It was an encouraging effort for Troup, which lost to Spencer in last week’s preseason game.

“Here’s what I told (the players),” Troup head coach Tanner Glisson said. “Gentlemen, I stood before you last week, and y’all were talking about how bad we were. I said guys, we’re not as bad as you think. And then tonight I stand before you and say we’re not as good as you think either. It’s usually somewhere in the middle. That being said, it was an improvement over last week against a playoff football team.”

After Michael Young kicked the ball into the end zone on the opening kickoff, Upson-Lee went three-and-out on its first possession, with Tae Moreland breaking up a pass on third down.

After a short punt, Troup had the ball at the Upson-Lee 31-yard line.

On fourth down, quarterback Ken Truitt heaved the ball toward the right side line, and senior wide receiver Tremayne Tolbert made a remarkable, diving, finger-tip, 24-yard catch at the 1-yard line.

On the next play, Bonner muscled his way into the end zone, and Young’s extra point gave Troup a 7-0 lead with 9:56 left in the opening quarter.

The next two touchdowns belonged to Upson-Lee, which claimed a 14-7 lead after the second of those scores with 3:35 remaining in the first half.

Upson-Lee may have had an even bigger lead if not for some timely defensive plays, including interceptions by Albert Hairston and Macenta Stafford.

After Upson-Lee’s second touchdown, Troup took over at its own 24-yard line following the kickoff as the sky began to turn ominous.

Truitt got the drive started with a 12-yard pass to Travis Johnson, and those same two hooked up later for an 8-yard completion to put the ball at midfield.

On the next play, Bonner took the handoff, he went left and found some open field, and he left everyone behind for a 50-yard scoring run with 1:48 left in the first half.

“Our offense is a big-play offense,” Glisson said. “We’re not a 15-play drive type of offense. That’s what happened on that last one. We got the tempo, and then Mess comes out the gate.”

Young’s extra point deadlocked the score, and at that point a lightning strike was spotted close by, and the game was suspended while everyone left the bleachers and the players went to the locker room.

Some key players who were suspended for last week’s game against Spencer were back for Thursday’s game, and while that was a factor, Glisson figured just having another five days of practice helped.

“It helps having those guys back, but I think we would have been improved even without them,” Glisson said. “I think we’re a week older. We had a good week of practice.”

While encouraged with the improvemend performance, Glisson added, “you’re going to look at the film, and you’re going to say man, there’s still a lot of things to work on.”

Next week, Troup will try to beat the rival LaGrange Grangers for the third straight season.