Cavaliers put opening loss behind them 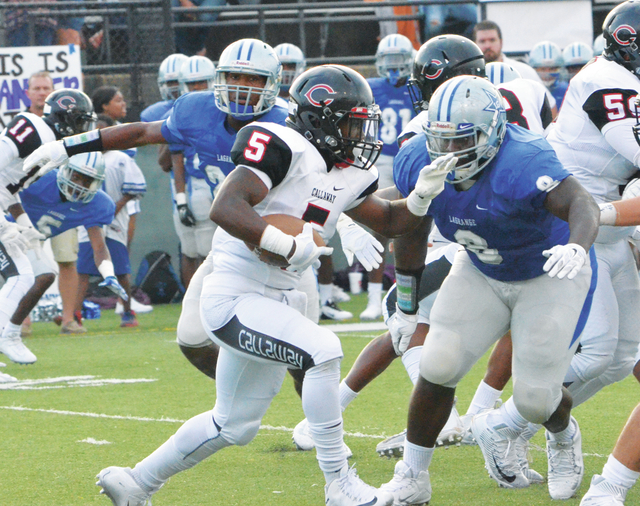 Callaway’s Tyrek Frazier gets in position while LaGrange’s Dexter Gates waits on a pass. Frazier made an interception on the play. Kevin Eckleberry | Daily News

http://lagrangenews.com/wp-content/uploads/sites/37/2015/08/web1_football54.jpgCallaway’s Tyrek Frazier gets in position while LaGrange’s Dexter Gates waits on a pass. Frazier made an interception on the play. Kevin Eckleberry | Daily News Callaway running back Cedric Maynard looks to get by LaGrange’s Emmanuel Mann during Friday’s game. Maynard had a big night that included a 56-yard touchdown run. Kevin Eckleberry | Daily News

http://lagrangenews.com/wp-content/uploads/sites/37/2015/08/web1_football72.jpgCallaway running back Cedric Maynard looks to get by LaGrange’s Emmanuel Mann during Friday’s game. Maynard had a big night that included a 56-yard touchdown run. Kevin Eckleberry | Daily News

LAGRANGE — As the Callaway Cavaliers returned to the field Friday night for the second half of their game against LaGrange, they were right there.

Even though they’d given up a touchdown late in the first half, they were only down by nine points, and they were going to get the ball first in the third quarter.

In a span of less than seven minutes at the start of the second half, though, that nine-point deficit had grown to 32.

LaGrange scored three touchdowns and also notched a safety to build a 38-6 lead with 4:48 to play in the third quarter.

The Cavaliers kept fighting and put a couple of touchdowns on the board down the stretch, but the Grangers walked away with a 45-20 victory.

While the Grangers got their season off to a rousing start, the Cavaliers will get back on the practice field and work on some of the issues that hurt them in Friday’s game.

“I’m proud that our kids kept fighting, and obviously there are things that we can do better and mistakes that we made that we need to work on, and that’s what we’ll do,” Callaway head coach Pete Wiggins said.

The Cavaliers got a 2-yard touchdown run from quarterback Braylon Sanders with 3:12 left in the first half.

Even though the two-point conversion attempt failed, the Cavaliers were only down 8-6 at that point, and they were hoping they’d started to seize some momentum.

The Grangers marched right back down the field and scored a touchdown of their own, though, and beginning with that score, they notched 30 consecutive points in less than 12 minutes, the length of a quarter.

The Cavaliers finally broke that slide when Cedric Maynard ripped off a 56-yard touchdown run with 3:57 left in the third quarter, but by that point LaGrange’s lead was 32 points.

Callaway also got a 1-yard touchdown run from Sanders in the fourth quarter to complete the scoring.

Maynard had a big day with 167 yards on 14 carries, while Sanders ran for 93 yards on 10 attempts with two touchdowns in his ever start at quarterback.

The game started with Callaway’s defense forcing a three-and-out.

On the Cavaliers’ first play from scrimmage, though, Sanders’ knee went down in the end zone for a safety, and the Grangers had a 2-0 lead.

Callaway’s defense did its part to keep it close early.

On LaGrange’s second possession, Callaway defensive back Tyrek Frazier made an interception in the end zone to thwart a scoring threat.

Later in the first quarter, Dre Martin came through with an interception for Callaway near midfield.

The Cavaliers were unable to turn either one of those interceptions into points, though, and LaGrange scored the first offensive points of the game on a LaPerion Perry 10-yard touchdown run to make it an 8-0 game with 8:43 left in the half.

The Cavaliers then embarked on their most impressive drive of the night.

It began with a Maynard 28-yard run to near midfield, and Sanders then hit Martin for a 26-yard completion to the 33-yard line.

Sanders connected with Martin and Maynard for back-to-back completions of seven and six yards to put the ball on the 20-yard line.

After a 9-yard run by Maynard and a pair of LaGrange penalties, Sanders capped the 80-yard drive by plunging through the middle for a 2-yard touchdown.

Trailing by two, Callaway decided to go for two, but LaGrange made the stop, and it was an 8-6 game.

The Grangers took over at their 25 after the kickoff, and they got 15 yards thanks to a Callaway penalty to jump-start the scoring drive.

LaGrange went the remaining 60 yards in six plays, with running back Kimani Barnes finishing things off with a 12-yard scoring run with 30 seconds left in the half.

Still, the deficit was a manageable nine points at the half, so there was plenty of hope for the Cavaliers.

Then came the disastrous third quarter.

A Callaway fumble on its first play of the second half led to a 3-yard scoring run by Amad Ogletree, and it was a 22-6 game.

LaGrange then went 70 yards for a touchdown, with Andrew Askew catching a 49-yard scoring pass from Perry.

Now trailing 31-6, it got worse for the Cavaliers when Jeremiah Wright picked off a pass and went 30 yards for a touchdown.

The Cavaliers finally got something to go their way when Maynard found some daylight and went 56 yards for the touchdown, and a Noah Stephens extra point cut LaGrange’s lead to 38-13 with 3:57 to play in the third quarter.

After an unsuccessful onside kick attempt, LaGrange went 52 yards for a touchdown that ended any possibility of a comeback.

Callaway put together a 73-yard scoring drive later in the quarter.

Maynard had back-to-back runs of 29 and 10 yards to get the ball in LaGrange territory.

After a 25-yard run by Brandon Boddie, Sanders scored on a 1-yard run.

Stephens made an extra point to make it a 45-20 game, and that’s the way it ended.