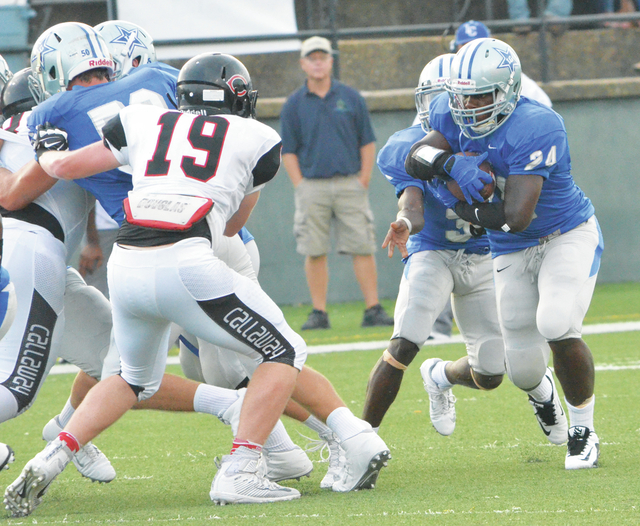 LaGrange’s Andrew Askew holds up four fingers as the fourth quarter gets under way during Friday’s game. Askew had a long touchdown catch in the third quarter. Kevin Eckleberry | Daily News

http://lagrangenews.com/wp-content/uploads/sites/37/2015/08/web1_football172.jpgLaGrange’s Andrew Askew holds up four fingers as the fourth quarter gets under way during Friday’s game. Askew had a long touchdown catch in the third quarter. Kevin Eckleberry | Daily News The referee gives the touchdown signal after LaGrange’s Mike Hardy came down with the ball in the end zone. Kevin Eckleberry | Daily News

http://lagrangenews.com/wp-content/uploads/sites/37/2015/08/web1_football182.jpgThe referee gives the touchdown signal after LaGrange’s Mike Hardy came down with the ball in the end zone. Kevin Eckleberry | Daily News LAGRANGE — As the ball came his way, LaGrange High receiver Mike Hardy found himself double-covered, and the chances appeared fairly slim that he’d even be able to get his hands on the ball.

He did a lot more than that.

The LaGrange senior reached over the two defenders and snatched the ball away for a remarkable 13-yard touchdown catch.

It was that kind of night for the Grangers, who opened their season with a 45-20 victory over the Cavaliers at a jam-packed Callaway Stadium on Friday.

Hardy’s catch came moments into the fourth quarter, and it gave the Grangers a 45-13 lead.

A year after falling to the Cavaliers 20-14 in overtime, the Grangers were able to celebrate a huge opening-night win.

“They edged us out last year. We owed them a win,” Hardy said. “We had to get some get-back. We’re working hard.”

The Grangers took control of the game with a remarkable stretch in the third quarter where they scored 23 straight points in less than seven minutes, and they scored 30 consecutive points overall.

It was a complete performance by the Grangers.

The offense, led by dynamic junior quarterback LaPerion Perry, was unstoppable once it got rolling.

Andrew Askew had a 49-yard touchdown catch for the Grangers, and Perry, Amad Ogletree and Kimani Barnes all had scoring runs to highlight the offensive effort.

Perry did it with his arm with the two touchdown passes, and he also had a scoring run of his own, and there were numerous other plays where he kept drives alive with first-down runs.

Perry finished with more than 150 yards on the ground.

“He’s sensational,” Hardy said of Perry. “That’s all I can say.”

LaGrange’s offensive line, even without all-state lineman Luke Elder who is recovering from knee surgery, did a terrific job of opening holes for the running game and protecting Perry.

The defense not only did a nice job of slowing down Callaway’s high-powered offense, but it also scored points.

Jeremiah Wright returned an interception for a touchdown, and LaGrange also scored points on two safeties.

Bobby Willoughby led the Grangers with nine tackles, and Emmanuel Mann led a strong effort among the defensive linemen with five tackles, a forced fumble and a fumble recovery.

The special-teams players also did their jobs well.

Matthew Thomas made five extra points, C.J. Harman pinned Callaway on its own 5-yard line with a punt in the first quarter, and the kickoff coverage was excellent throughout the game.

“They played with focus. That’s all it was, focus,” LaGrange head coach Dialleo Burks said. “That’s how we practice every day from the time we hit the field. We demand focus. And it’s tough, because a lot of them think we don’t love them, but we just have to get them to Friday, get them to game day. Once we get them to game day, everything else is good. Now, they can reap the benefits of all that hard work.”

LaGrange’s first points came when Callaway quarterback Braylon Sanders’ knee went down in the end zone for a safety less than three minutes into the game, and Marcus Fannin was credited with the tackle.

The Cavaliers had poor field position at their own 5-yard line following Harman’s punt, and the safety came on first down.

LaGrange’s next two offensive possessions ended with interceptions, but the defense made sure neither one of those turnovers turned into points.

So when the Grangers got the ball at their own 34-yard line early in the second quarter, they still had a 2-0 lead.

Beginning with that possession, LaGrange’s offense scored touchdowns the next five times it touched the ball.

On the Grangers’ first touchdown drive, Perry settled in and showed how dangerous he can be.

He had a 30-yard run to the Callaway 10-yard line, and the elusive Perry had a touchdown run on the next play to give LaGrange an 8-0 lead with 8:43 to play in the half.

The Cavaliers responded with an 80-yard touchdown drive that was capped by a Sanders 2-yard scoring run.

Callaway went for two, and the Grangers made a big stop allowing them to maintain a two-point lead.

The Grangers began their ensuing possession at their own 25-yard line with 3:06 left in the half.

After a 15-yard penalty on the Cavaliers, the Grangers had the ball at their own 40-yard line, and they went to work.

Perry’s 15-yard keeper put the ball in Callaway territory, and Barnes then had back-to-back carries of 21 and nine yards and the Grangers had the ball on the 15-yard line.

Three plays later, Barnes scored on a 12-yard run, and Thomas made the extra point to give LaGrange a 15-6 lead, which was the score at the half.

Callaway’s first play of the second half resulted in a lost fumble that was recovered by Mann, and LaGrange had the ball just five yards from the end zone.

A pair of penalties and a play that lost four yards knocked the Grangers back to their own 19-yard line, but Perry’s 16-yard run put the ball on the three.

On the next play, Ogletree’s 3-yard touchdown run and Thomas’ extra point gave LaGrange a 22-6 lead.

Ogletree, who was in competition with Perry to be the starting quarterback, made a key contribution in Friday’s game on both sides of the ball.

“It’s big for him to come in and fill in some spots that we didn’t have much depth in,” Hardy said.

Needing to get something positive going, Callaway instead lost 10 yards on the first play of the following possession when LaGrange made a nice play on a reverse.

Two plays later, Sanders was called for intentional grounding while being wrapped up by Mann, and it was ruled a safety, and LaGrange led 24-6, with 8:27 still to play in the third quarter.

After the free kick, the Grangers went 70 yards for another touchdown.

Barnes got things started with a 10-yard run, and after a Perry 6-yard run for a first down, the Grangers were at midfield.

Perry threw a screen pass to Askew, who turned what looked like a short completion into a 49-yard touchdown.

Askew eluded a tackle attempt at the line of scrimmage, and once he got into the open field, he left everyone behind.

Then it was time for LaGrange’s defense to get into the act.

On third-and-15, LaGrange knew a pass was coming.

Wright was ready in the secondary and he picked off a pass near the 30-yard line, and he raced untouched into the end zone for the touchdown, and LaGrange led 38-6.

Callaway’s offense that had been held in check for so long finally broke out when Cedric Maynard broke free for a 56-yard touchdown run, and LaGrange’s lead was down to 37-13 with 3:57 to play in the third quarter.

How did the Grangers respond?

The drive started with Askew showing off his play-making ability again with a 31-yard reception.

Even when things went wrong, the Grangers weren’t bothered.

The Grangers lost 15 yards on a play where they recovered their own fumble, but on the following play, Perry knifed through Callaway’s defense for a 34-yard pickup.

Ogletree then put the ball on the 6-yard line with a 14-yard gain.

A penalty and a play that lost two yards put the ball on the 13-yard line, and on third down, Perry floated the ball into the right side of the zone where Hardy was waiting, draped by two Callaway defenders.

“I was cramping all night, and I didn’t get too many balls thrown my way,” Hardy said. “But when I had a chance to make a play, I made it.”

Burks said that play epitomized the attitude the Grangers played with.

“You’ve got to fight,” Burks said. “We are fighters. They believe it. It’s catching.”

Callaway scored the game’s final touchdown with 4:36 remaining on a Sanders 1-yard run, but the outcome had long since been decided.

“My hats off to (the players), and to the coaching staff, for putting together a good game plan, and sticking with it,” Burks said. “We had some rough patches, but they just stayed with what they believed in, and it was a great night.”