Junior golf league is a hit 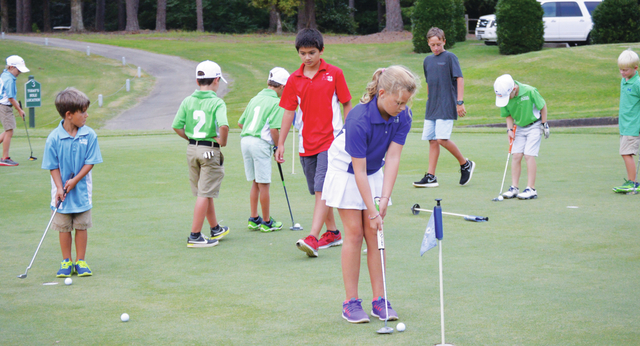 Todd Ormsby goes over the rules with the golfers before the start of last week’s playoff between Highland Country Club and Columbus. Contributed photo

http://lagrangenews.com/wp-content/uploads/sites/37/2015/08/web1_8-20-golf4.jpgTodd Ormsby goes over the rules with the golfers before the start of last week’s playoff between Highland Country Club and Columbus. Contributed photo The golfers get warmed up on the putting green before last week’s playoff. Contributed photo

http://lagrangenews.com/wp-content/uploads/sites/37/2015/08/web1_8-20-golf3.jpgThe golfers get warmed up on the putting green before last week’s playoff. Contributed photo

LAGRANGE – When Highland Country Club head professional Todd Ormsby and his wife Angela decided to start a local chapter of the PGA Junior League, he was hoping to get enough players to field a couple of teams.

They got a lot more than that.

“We were hoping to get a team or two (12 to a team), but the response was amazing and we ended up getting 52 kids signed up and had four teams including an all girl team with 15 girls,” Ormsby said.

Beginning in May, the players participated in tournaments each week, and after the completion of the regular season, an all-star team was selected from the various teams.

Last week, that team took on an all-star team from Columbus, and it was Columbus coming away with a 9 ½ to 2 ½ win.

That marked the end of the summer season, and a fall league is about to get under way.

The league is open to players of all skill levels, and Ormbsy said “we equal out the playing field using ability tees and matching up players to keep matches fun yet competitive.”

During the season, each match lasted nine holes, and the matches were divided into three three-hole segments called flags.

Each flag is worth a point, and the team that finished with the most points won the match.

It’s a low-pressure format that allows players of varying skill levels to get comfortable with the game, and to get a taste of what it’s like to compete in a tournament.

“It’s for anybody in this community,” Ormsby said. “My goal is to really grow the program.”

The league is open to boys and girls ages 7-13, and anyone interested needs to sign up by Sept. 10.

There will be at least six matches during the season, and there will be also be a handful of practice sessions after school each week.

The matches will be held on Sunday afternoons.

The cost is $150, and golfers don’t need to be members of Highland Country Club to participate.

The fees cover the cost of instruction from PGA and LPGA instructors, team shirts and tee gifts.

Ormsby said the idea behind the league is to spread the game and to make young golfers of all skill levels feel comfortable on the course.

Ormsby said that he and Angela “believe that junior golf is the future of the game and want to instill their golf knowledge and continue the tradition of shaping the lives of ladies and gentlemen on and off the course.”

He added that “the health of golf, the growth of the game, and the future of the sport depends on leagues like we are hosting at Highland Country Club.”

For information on the league, call the pro shot from Tuesday through Sunday from 8 a.m. until7 p.m., email hccjuniorteam1@gmail.com, or go to pgajuniorleague.com.