Troup turns the page to the regular season 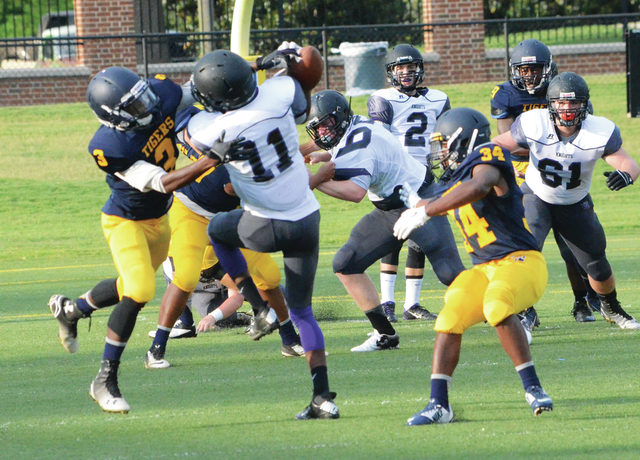 LAGRANGE – The Troup Tigers have their two warmup games in the books, and now it’s time to start playing for keeps.

In a game shortened to less than a half because of weather issues, Troup and Upson-Lee played to a 14-14 tie on Thursday at Callaway Stadium in a preseason game.

Mess Bonner had a 50-yard touchdown run with 1:48 left in the first half, and Michael Young’s extra point tied the score.

Moments after Young’s kick sailed through the uprights, lightning was spotted, and Troup athletic director Robert Schweizer waved everyone off the field.

The game never resumed, and Troup’s preseason schedule was complete.

Troup will open the season with a game against its biggest rival, the LaGrange Grangers.

Those two teams will face off at Callaway Stadium on Friday as Troup looks to make it three in a row over LaGrange.

The LaGrange game will mark the regular-season debut for Troup under the direction of first-year head coach Tanner Glisson.

“We’re excited. We’re excited about next week,” Glisson said. “I can’t wait for my first experience in that game. I’ve got a lot of respect for them. We’re definitely the underdog. There’s no doubt about that. We’ve got to go play like our hair’s on fire, and just give ourselves a chance.”

After struggling in a loss to Spencer in their first preseason game, the Tigers made drastic improvements in Thursday’s game against Upson-Lee.

Troup showed off its quick-strike ability on offense by going 76 yards in less than two minutes for a touchdown at the end of the second half.

It helped that 50 of those yards were covered by Bonner’s touchdown run.

Troup only needed to go 31 yards for its first touchdown after a shanked Upson-Lee punt, and 24 of those yards came on a remarkable diving catch by Tremayne Tolbert on a ball thrown by quarterback Ken Truitt.

Bonner finished that drive off with a 1-yard scoring run.

After that score, the Tigers’ next four possessions didn’t yield much, but they got in a rhythm on their final drive and scored a touchdown.

Truitt completed a pair of passes to Travis Johnson to get the ball to midfield.

While pleased with the improved performance from the Spencer game to the Upson-Lee game, Glisson said there is still a long way to go,

“Right now I’m concerned that we may can play good in spurts, but I don’t know that we can play four quarters of solid football,” Glisson said.

Glisson is hopeful that will come as the season goes along, and the Tigers will have time to develop that consistency since they’ll play five games before beginning their Region 5-AAAA schedule.

After the LaGrange game, Troup will play Northgate, Harris County, Carver and Callaway.

Following a week off, Troup will start region play on Oct. 9 at home against Woodward Academy.