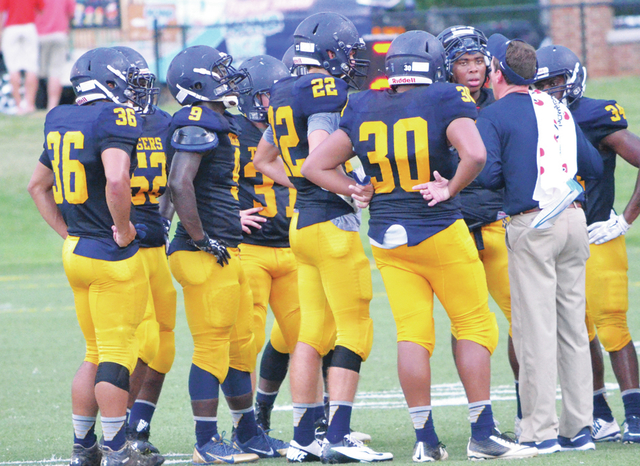 The Troup Tigers will play the LaGrange Grangers on Friday night in the second of two games at Callaway Stadium this week. Kevin Eckleberry | Daily News

http://lagrangenews.com/wp-content/uploads/sites/37/2015/08/web1_8-24-troup.jpgThe Troup Tigers will play the LaGrange Grangers on Friday night in the second of two games at Callaway Stadium this week. Kevin Eckleberry | Daily News

LAGRANGE — The Callaway Cavaliers don’t have long to lick their wounds.

After Friday’s 45-20 loss to LaGrange in the season opener, Callaway will be back at Callaway Stadium on Thursday against another quality opponent, B.E.S.T. Academy.

That will be the first of two games at Callaway Stadium this week, including Friday’s annual showdown between LaGrange and Troup.

It will be the season opener for B.E.S.T. Academy, which is looking to make it two in a row against Callaway.

A year ago in Atlanta, B.E.S.T. opened its season with a 14-7 win over Callaway.

It was a scoreless game at the half, and Eddie Culpepper had a touchdown run in the third quarter to give Callaway a 7-0 lead.

After pulling even, B.E.S.T. drove for the winning touchdown with less than a minute remaining.

In 2012 and 2013, Callaway and B.E.S.T. were in the same region and they played both years, and the Cavaliers won both games.

This will be the second of Callaway’s five non-region games.

Next week, Callaway will be in Heard County for its first true road game, and it will complete its non-region schedule with games against Harris County and Troup.

Troup, meanwhile, is looking to beat LaGrange for a third consecutive season.

Troup scored touchdowns on its final five possessions of the first half to build the commanding lead.

“It’s just a start,” Burks said. “We had way too many penalties, and we had some substitution situations. But we’ll get it together.”

In last week’s game, Troup got a late touchdown in the first half to tie Upson-Lee 14-14, and that’s the way it ended since the game was called early because of weather concerns.

It will be the first of five non-region games for Troup.

After the Troup game, LaGrange will play Spalding County and Mary Persons.

In private-school football, Lafayette Christian will play its first road game of the season when it visits Solid Rock Academy on Friday.