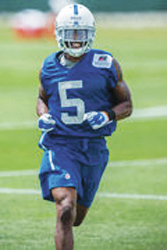 Quan Bray was unable to play in Saturday’s preseason game because of an injury.

http://lagrangenews.com/wp-content/uploads/sites/37/2015/08/web1_8-25-bray.jpgQuan Bray was unable to play in Saturday’s preseason game because of an injury.

Troup High graduate Quan Bray was looking to get on the field on Saturday with his Indianapolis Colts teammates and hopefully move a step closer to making an NFL roster.

Unfortunately for Bray, an injury kept that from happening.

The Colts played the Bears in a preseason game on Saturday, and Bray was unable to play because of a groin injury suffered in practice last week.

Bray, who signed with the Colts as an undrafted free agent after a stellar four-year career at Auburn, is looking to make the team as a reserve wide receiver.

Bray did play in the Colts’ first preseason game, and he didn’t have any catches.

Indianapolis head coach Chuck Pagano listed Bray as “day to day” last week, so he could be able to play when the team visits St. Louis on Saturday for another preseason game.

Former LaGrange Granger Wesley Woodyard, meanwhile, made his preseason debut with the Tennessee Titans in last weekend’s 27-14 win over the St. Louis Rams.

Woodyard, a linebacker, had one tackle in limited playing time.

The veteran Woodyard, who is entering his eighth season in the NFL, led the Titans in tackles a year ago in his first season with the team.