Callaway has the bats working in 11-2 win 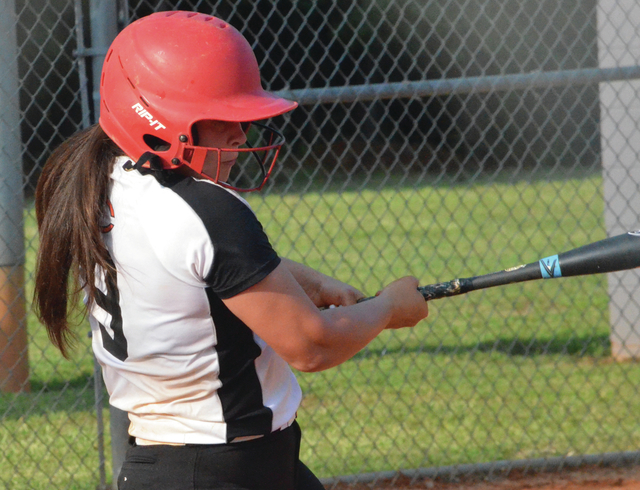 Callaway’s Jessica Perkins delivers a pitch during the first inning of Monday’s win over Hardaway.

http://lagrangenews.com/wp-content/uploads/sites/37/2015/08/web1_8-25-softball2.jpgCallaway’s Jessica Perkins delivers a pitch during the first inning of Monday’s win over Hardaway. Callaway senior Brittany Mitchell had a two-run triple in the sixth inning of Monday’s game.

http://lagrangenews.com/wp-content/uploads/sites/37/2015/08/web1_8-25-softball5.jpgCallaway senior Brittany Mitchell had a two-run triple in the sixth inning of Monday’s game.

HOGANSVILLE — It was a no-doubter.

When Keshonna Terrell stepped to the plate in the bottom of the sixth inning, her Callaway Lady Cavaliers had a 9-2 lead over visiting Hardaway.

Terrell got a pitch she could handle, she put a great swing on it, and the ball sailed way over the center-field fence for a two-run home run.

The game ended at that point because of the run rule, and Callaway walked away with an 11-2 victory to improve to 5-3.

Jessica Perkins also hit a home run for Callaway, and Brittany Mitchell had a two-run triple.

Lydia Bartlett added an RBI double, Terrell and Perkins also had RBI singles, and Oeisha Jenkins continued to have a strong freshman season with a run-scoring base hit.

Skylar Rice and Keke Talley also had RBIs for Callaway.

Callaway coach Ashley Summerlin said the hard work the players are putting in on their hitting is paying off.

“We’ve really been working on hitting,” Summerlin said. “We came in Saturday and we worked for two hours. Some of them are really starting to come around.”

Terrell, a shortstop, has been hitting the ball hard since she began playing for Callaway.

She has been one of the team’s most productive hitters since her freshman season when she hit .377, and she’s off to a fast start as a senior.

When Terrell came to bat in the sixth inning, she was concentrating on having a quality at-bat, not necessarily hitting one over the fence.

“I just put a good swing on it and hit it up the middle like coach tells me, and it just went out,” Terrell said.

Perkins, in addition to the good work she did at the plate on Monday, was also the winning pitcher after throwing two scoreless innings.

Perkins had been out of action for more than a week with a back injury, and she’s back just in time for the start of Region 5-AAA play.

Callaway will be on the road against Pepperell today for its region opener, and Perkins will get the start.

“If she was going to start (against Pepperell), she had to pitch today,” Summerlin said. “We’ll see how it goes. If it works out where she’s able to pitch the whole game, that’s good. If it doesn’t work out, we’ve got the other two. I believe in both of those girls.”

Callaway scored the game’s first run in the bottom of the first inning.

Senior second baseman Molly Hubbard led off with a walk, and with two outs, Terrell delivered an RBI single to give Callaway a 1-0 lead.

That’s the way it remained until Callaway broke through for four runs in the third inning.

With one out, Perkins hammered the ball over the center-field fence for a solo home run, and Callaway led 2-0.

Mitchell reached on an error and Terrell walked, and Jenkins followed with an RBI single to push the lead to 3-0.

Rice drove in another run with a sacrifice fly, and Bartlett capped the four-run inning with an RBI double.

In the fourth inning, Hubbard walked and later scored on a Perkins base hit, and it was a 6-0 game.

After Hardaway scored its two runs in the top of the fifth, Callaway added another run in the bottom of the inning.

Terrell and Jenkins reached base the hard way by getting hit by pitches, and after a Bartlett walk, Talley drove in a run with a fielder’s choice.

After Hardaway was held scoreless in the top of the sixth, Callaway put it away with four runs in the bottom of the sixth.

Hubbard walked and Perkins singled, and Mitchell drove the ball to the fence and made it all the way to third for a two-run triple.

Mitchell, like Terrell, is a four-year starter and she is putting the wraps on a sensational high-school career.

Mitchell has continued to put up big offensive numbers this season, even though she is playing catcher for the first time.

Following Mitchell to the plate was Terrell, and she ended it with her two-run blast.

Terrell said that “when it came off the bat, I knew it was gone.”