Grangers get offensive in season opener 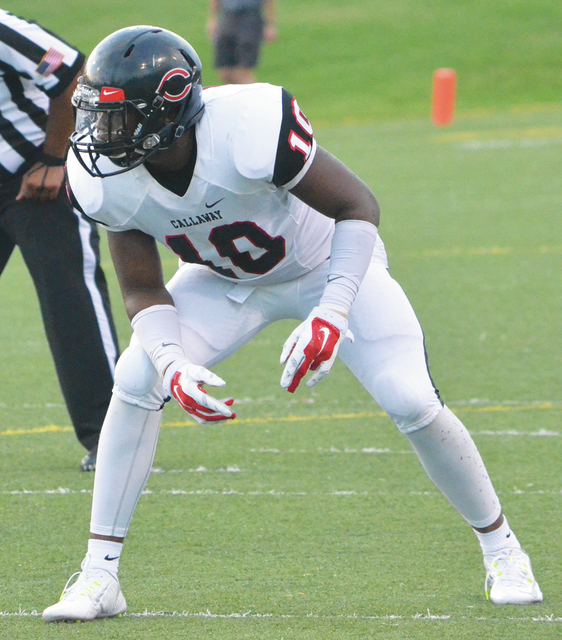 LaGrange quarterback LaPerion Perry gets ready for the snap during Friday’s game against Callaway. Perry and the rest of the offense had a big day in a 45-20 victory.

http://lagrangenews.com/wp-content/uploads/sites/37/2015/08/web1_8-25-LHS-perry.jpgLaGrange quarterback LaPerion Perry gets ready for the snap during Friday’s game against Callaway. Perry and the rest of the offense had a big day in a 45-20 victory. Troup’s Mess Bonner is brought down during last week’s preseason game against Upson-Lee. Bonner had a 50-yard touchdown run in the game.

http://lagrangenews.com/wp-content/uploads/sites/37/2015/08/web1_8-25-troup-bonner.jpgTroup’s Mess Bonner is brought down during last week’s preseason game against Upson-Lee. Bonner had a 50-yard touchdown run in the game. Callaway’s Javoski Leverette gets in position before a play during Friday’s game against LaGrange. Leverette had 14 tackles.

http://lagrangenews.com/wp-content/uploads/sites/37/2015/08/web1_8-25-CHS-javoski.jpgCallaway’s Javoski Leverette gets in position before a play during Friday’s game against LaGrange. Leverette had 14 tackles. LaGrange’s Amad Ogletree had a touchdown run during Friday’s win over Callaway.

http://lagrangenews.com/wp-content/uploads/sites/37/2015/08/web1_8-25-LHS-ogletree.jpgLaGrange’s Amad Ogletree had a touchdown run during Friday’s win over Callaway. Troup’s Travis Johnson had a pair of receptions on a touchdown drive late in the first half of last week’s preseason game against Upson-Lee.

http://lagrangenews.com/wp-content/uploads/sites/37/2015/08/web1_8-25-troup-johnson.jpgTroup’s Travis Johnson had a pair of receptions on a touchdown drive late in the first half of last week’s preseason game against Upson-Lee. The Grangers’ first possession was a three-and-out, and the next two times they had the ball, Perry threw interceptions.

That’s not how Perry, who won the quarterback job during preseason practice and with a terrific performance in a scrimmage game against Newnan, envisioned his night getting under way.

The fourth time the Grangers got the ball, though, they scored a touchdown, and the Perry-led offense was off and running.

The Grangers scored touchdowns on five consecutive offensive possessions, and Perry ended up with two touchdown passes and one scoring run in the 45-20 victory.

Perry ran for more than 150 yards, and after the early interceptions, he completed his next three passes for 93 yards.

“He has a great mind for the game,” Burks said. “It’s tough to get to him. He’s his own critic. He’s his biggest critic. We really don’t have to get down on him. He came over and said this is what I saw, and I said great.”

Perry said he kept his head up after the rocky first few possessions.

“You have to have confidence, and never give up,” Perry said.

While Perry provided a whole bunch of highlights, there were plenty of other offensive standouts as well.

Mike Hardy only had one catch, but it was a 13-yard touchdown reception in the second half.

Andrew Askew caught two balls, one for 31 yards, and one for 49 yards that went for a touchdown.

Running back Kimani Barnes ran for more than 70 yards and averaged better than six yards per carry, and he had a 12-yard touchdown run.

Another key offensive contributor was Amad Ogletree, a senior who was the starting quarterback a year ago.

Ogletree has moved to running back, and he had a 3-yard touchdown run that got the Grangers rolling in the second half.

“He’s a great athlete,” Burks said of Ogletree. “Just because you’re not in one spot does not mean you can’t help the team win, and you can’t be effective.”

Perry said having so many talented play-makers makes the offense dangerous.

“They keyed in on me, and they left some plays wide open,” Perry said.

Bonner, a senior, is one of Troup’s top offensive play-makers, and he showed how dangerous he can be in last week’s preseason game against Upson-Lee.

The Tigers didn’t do much offensively after that until they got the ball late in the first half at their own 24-yard line trailing 14-7.

After the Tigers got the ball to midfield, Bonner took a handoff from quarterback to Ken Truitt.

As Bonner headed toward the left sideline, it looked like there wasn’t much running room.

Bonner cut back and the Upson-Lee defenders over-ran him, though, and the senior speedster out-raced everyone for a 50-yard touchdown run.

Earlier on that drive, another one of Troup’s key offensive players, tight end Travis Johnson, caught passes of 12 and eight yards to get the ball to midfield.

Troup head coach Tanner Glisson said Johnson will be a key part of the offensive attack this season.

“We can put him at tight end, we can flank him,” Glisson said. “He’s got the best hands on the team. He catches the football really well.”

The same can be said for senior Tremayne Tolbert, who provided a highlight-reel type catch that set up Troup’s first touchdown against Upson-Lee.

On fourth down, Truitt lobbed the ball down the right sideline, and it looked it was going to be out of Tolbert’s reach, but the senior stretched and made a sensational catch at the 1-yard line, setting up Bonner’s touchdown run.

It was the second straight preseason start for Truitt, a junior who has been competing with Montez Crowe and Dexter Shealey to be Troup’s starting quarterback.

Truitt shared time with Crowe during the Spencer game, and he took all of the snaps against Upson-Lee last week.

The Tigers will unveil the full offensive package on Friday in the regular-season opener against LaGrange.

With Bonner and fellow running backs Shealey, Camren Russell and Jackson Davis, along with some talented receivers including Tolbert and Johnson, Troup could cause some headaches for opposing defenses.

“Anywhere you look offensively, you’ve got some weapons,” Glisson said.

WELCOME BACK: Callaway’s Javoski Leverette missed nearly all of the 2014 season after suffering a broken leg during the preseason.

The only game action Leverette saw came in the second round of the state playoffs when he played some minutes late in the loss to Washington County.

Leverette, an inside linebacker, is back and 100 percent healthy now, though, and the senior is going to be counted on to be an anchor of the defense.

In Friday’s season opener, Leverette showed he’s ready to go when he led the team with an impressive 14 tackles.

Callaway head coach Pete Wiggins said Leverette put in a lot of hard work in the offseason so he’d be able to make the most of his senior season.

“He really committed in the weight room in the offseason, and he’s really played well,” Wiggins said. “He had a good summer at seven-on-seven camps and has really been a leader on our team, and a leader on our defense.”

Another one of the team’s leaders, JT Wortham, added seven tackles for Callaway.

Callaway also got interceptions from Tyrek Frazier and Dre Martin in the first quarter.