Hundreds turn out for tournament 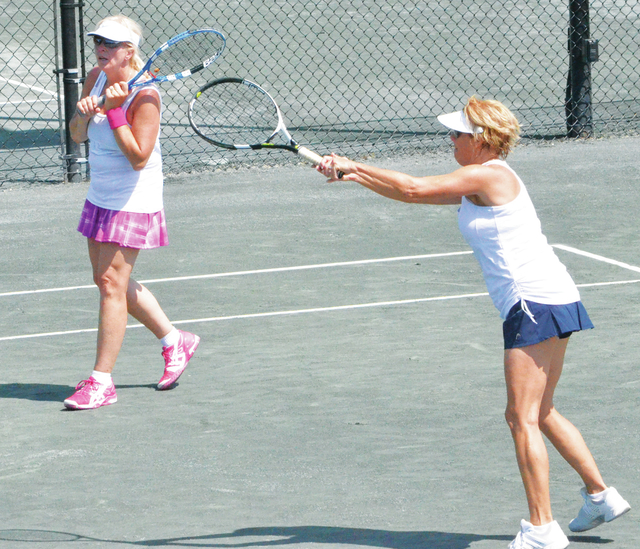 Mitchelle Cornett and Jennifer Bogle were part of the women’s 40-and-over team that won a state championship.

http://lagrangenews.com/wp-content/uploads/sites/37/2015/08/web1_8-25-tennis1.jpgMitchelle Cornett and Jennifer Bogle were part of the women’s 40-and-over team that won a state championship.

LAGRANGE — The past two years when McCluskey Tennis Center served as the host site for the United States Tennis Association’s tri-level state tournament, there were around 225 players each time.

As Year 3 of the tournament approached, it was obvious the participation level was going to be a whole lot higher.

By the time the tournament rolled around on Friday, there were about twice as many players this year as there had been the previous two years.

“We’ve had right around 225, 230, but this year we ended up with 454 participants,” said Karen Bryant, the tournament organizer. “I didn’t find out until about 2 ½ weeks ago. We just doubled everything.”

Despite the challenges of hosting a tournament with that many players, everything ran smoothly, and the tournament wrapped up on Sunday with champions crowned on the men’s and women’s sides in a number of different age divisions.

Among the winners were a pair of local teams, a men’s team and a women’s team, who took top honors in their age groups.

The tri-level format means each team is made up of players that have three different USTA rankings.

Bryant said tri-level tennis is popular because it allows friends who may be miles apart when it comes to skill level to play together.

“This lets you play with friends that you normally might not be on the team with,” Bryant said. “It’s kind of a fun league, and people play on teams with their friends.”

The tournament began at 8 p.m. on Friday, and there was a full day of tennis on Saturday.

There was a rain delay on Sunday, but there was no problem getting all of the matches in.

“We had a little bit of a delay, but we got everything in, and the players were very happy with the facility, and the city of LaGrange,” Bryant said.

Some of the matches were played at Callaway High, and Bryant said that was extremely helpful.

“Thank goodness Callaway let us use their courts,” Bryant said. “That was a life-saver.”