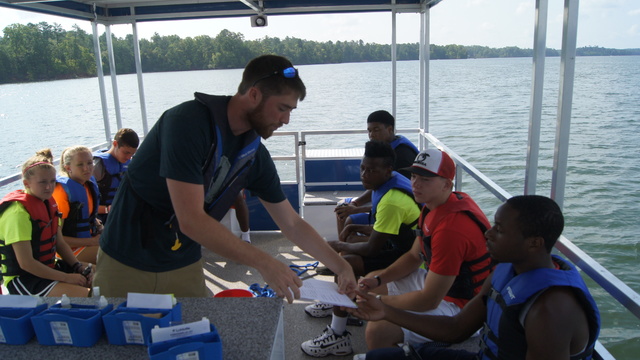 LaGRANGE — Around 20 incoming freshman from LaGrange College toured and tested West Point Lake for about an hour Monday with members of the Chattahoochee Riverkeeper organization and its floating classroom.

The group took water samples from the lake and tested them for pH, water temperatures and oxygen levels.

“It was cool how it switched colors,” 18-year-old Tyshon Fentress said about taking pH samples from the water.

Of the 20 students, only one had been on West Point Lake before.

“I’ve been living here for 18 years, and I never knew any of it. It’s just nice to know,” said 18-year-old Qua Tucker about the tour.

According to Jacobs, Chattahoochee Riverkeeper was started as a watchdog for the river and to give a voice to a river that was voiceless at the time. Since then, conditions have improved and the focus has switched to teaching people to be good stewards for the river.

The floating classroom was launched in July. The $96,000 project was supported in part by the Callaway Foundation of LaGrange, which gave the riverkeeper a matching grant, according to Jason Ulseth of the Chattahoochee Riverkeeper.

The riverkeeper plans to use the 5,500-pound, triple-pontoon craft as an education platform to teach area students, civic groups and other organizations about West Point Lake, according to Jacobs.

“We’re hoping people will learn about West Point Lake in relation to the Chattahoochee River watershed,” he told the Daily News after the classroom launched in July. “We’ll teach about the history of the lake, along with science and math. It’s also a team-building experience.”

Jacobs hopes people will learn more about the lake and become interested in protecting it for future generations.