Can Tigers make it three straight? 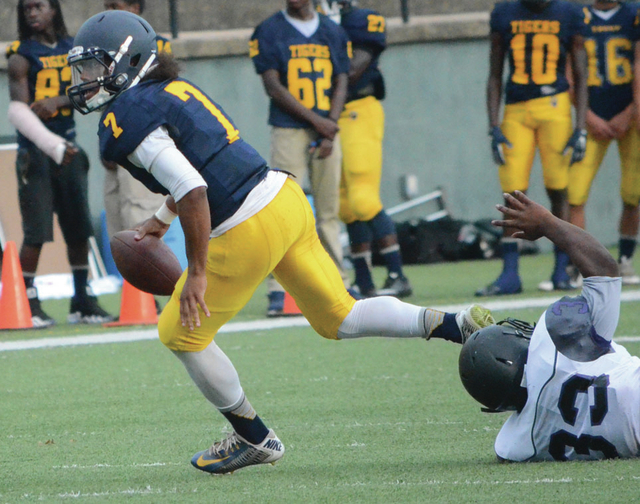 Troup’s defense gets ready for a play during last week’s preseason game against Upson-Lee. Troup will open the season on Friday against LaGrange. Kevin Eckleberry | Daily News

http://lagrangenews.com/wp-content/uploads/sites/37/2015/08/web1_8-26-troup2.jpgTroup’s defense gets ready for a play during last week’s preseason game against Upson-Lee. Troup will open the season on Friday against LaGrange. Kevin Eckleberry | Daily News LAGRANGE – The Troup Tigers have turned the tables on their biggest rival.

Since they began playing, the LaGrange Grangers have mostly had their way in the rivalry with Troup.

Things have changed in recent years, though.

Troup has won four of five meetings between the two rivals beginning with a 34-27 win in 2010, and the Tigers have won two in a row by a combined score of 74-23.

On Friday, the Tigers will try to make it three in a row over the Grangers when they kick off a new season.

Troup has played two preseason games, but Friday will be its regular-season debut.

Troup will be playing its first regular-season game under head coach Tanner Glisson, who has been busy getting the team ready to go since taking the job in May.

LaGrange, which is in its second season under head coach Dialleo Burks, opened its season last week with an impressive 45-20 victory Callaway.

LaGrange lost a preseason game to Newnan 14-13, although the Grangers led 13-7 while the starters were in the game.

“If you look at LaGrange, they beat a quality Newnan team, and then they beat Callaway,” Glisson said. “Nobody has stopped them. Nobody has even slowed them down. So that’s a big concern. And they run around defensively the way we want to run around. They get to the ball. You can put in film on LaGrange last year and put film on them this year, and you can see they’re in Year 2 (under a head coach).”

Troup struggled in its first preseason game with Spencer.

The Tigers, who were short-handed with some players out of action because of a suspension, lost 33-15.

A week later Troup was back on the field against Upson-Lee, and the story was a different one.

Facing a quality team that made the state playoffs a year ago, Troup fought to a 14-14 tie.

Play was suspended with a little more than a minute remaining in the first half because of lightning, and the game never resumed.

“We went into the Spencer game, and of course we were down a few players, but I think we tried to put the cart in front of the horse,” Glisson said. “We tried to get a lot of things put in. After the Spencer game we met, and I just said hey, scale it back, and go back to the very basics.”

The result was an improved effort on both sides of the football.

The defense in particularly made dramatic strides after giving up a bunch of big plays to Spencer.

“Defensively, we stayed in our base defense all but two plays against Upson-Lee,” Glisson said. “What happened was the kids picked up what we were doing in base and played a little big quicker and faster. I think scaling things back and focusing in on the base and the fundamentals really helped us.”

Glisson said considering how difficult things have been for the players over the past year or so, it was nice to have a positive take-away from the Upson-Lee game.

On the game’s final play from scrimmage, Mess Bonner went 50 yards for the touchdown, and Michael Young’s extra point tied it before play was halted.

“We needed some positive stuff,” Glisson said. “You have to think with these kids, they were 3-7 last year, and the circus that went around with the coaching carousel in the offseason, and not having a spring practice, and looking bad against Spencer. They needed something positive. And I think it was positive. It was 14-14 against a good football team. And to score like we did at the end and get some momentum was big.”

The Tigers will look to carry that momentum into Friday’s annual grudge match with the Grangers.

Whatever happens Friday, there will be still be a lot of football to be played and Glisson wants to make sure the players understand that.

“Anytime they’re keeping score you go out there to win,” Glisson said. “There’s no doubt about that. The rivalry is nice. It’s nice for the fans. It’s nice for the kids that are involved. But you want to go out and win every single game. We’re going to be ticked off if we win one and then turn around and lose the next week. You want to win every week.”

Glisson knows it’s not just another game, though, and he’s hoping his team will give the Troup fans who’ll be on the home side of the bleachers something to cheer about.

“I think it’ll be a full house. That’s a pretty safe bet,” Glisson said. “I hope that we feed off that a little bit of that and give our people a reason to be excited. Hopefully our kids will get excited. We just have to go and play the game and see what happens.”