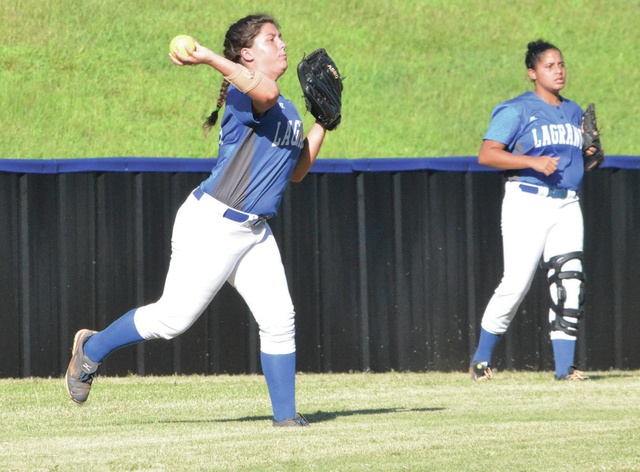 LAGRANGE – The Northside Lady Patriots figure to be one of the teams to beat in Region 1-AAAAA, and they showed why on Tuesday against the LaGrange Lady Grangers.

Behind a stellar pitching performance from Allison Sievers, Northside claimed a 9-1 victory at LaGrange’s home park.

LaGrange had a hard time getting much done at the plate.

The Lady Grangers managed just two hits, although they did get something going in the fifth inning when they scored their lone run.

The game ended after the fifth inning because of the run rule.

Shaq Sutton and Leighton Parker had LaGrange’s hits, and Parker drove in a run in the fifth inning.

McClain Skinner got the start and went the distance for LaGrange.

Northside took the lead with a run in the top of the first, and it added three runs in the third inning to take a 4-0 lead.

After scoring a single run in the fourth inning, Northside added four more runs in the top of the fifth.

Needing two runs in the bottom of the fifth to keep the game alive, the Lady Grangers came up just short.

LaGrange (4-4 overall), which beat Carver 12-0 in its region opener last week, will be on the road against Shaw on Thursday.

LAGRANGE ACADEMY: The Lady Warriors made their home debut on Tuesday, and they lost to Trinity Christian 12-1.

Trailing 2-0 in Tuesday’s game, LaGrange Academy pushed a run across in the bottom of the second to get within one.

Trinity came right back with two runs in the top of the third, though, and it went on to win the game in five innings because of the run rule.

Heather Gooch had LaGrange Academy’s lone hit in the game, and Laney Anderson had her team’s only RBI.

LaGrange Academy will be back home on Thursday for a game against Griffin Christian at 4 p.m.

CALLAWAY: Hoping to get their Region 5-AAA schedule started on a positive note, the Callaway Lady Cavaliers instead dropped a 7-6 heart-breaker to the home-standing Pepperell Lady Dragons on Tuesday.

The Lady Cavaliers fought back from a 5-2 deficit to pull even in the seventh and final inning, but the Lady Dragons scored an unearned run in the bottom of the seventh to get the win.

“You always take something away from a game,” Callaway coach Ashley Summerlin said. “What was positive, we were losing 5-2 going into the fourth, and we scrapped back and kept fighting back and found a way to tie it at 6-6.”

Summerlin said the team was done in by some shaky defense, though.

“We made too many defensive mistakes,” he said. “We just didn’t do enough on the defensive side of the ball.”

Keshonna Terrell, who hit a home run in Monday’s win over Hardaway, went deep again on Tuesday and finished with two hits.

Jessica Perkins, who like Terrell had a home run in Monday’s game, had two hits and an RBI against Pepperell.

Freshman Oeisha Jenkins had two hits, including a double, and Lydia Bartlett and Mallory Gallaway each had one hit.

Skylar Rice had one hit, and it was a big one.

With two outs in the top of the seventh inning, Rice came through with an RBI single to bring in Keke Talley with the tying run, but Pepperell won it in the bottom of the inning.

Callaway will continue its region schedule with a home game against a strong Cedartown team on Thursday.

Cedartown beat Callaway twice a year ago on the way to a 26-11 season.

Cedartown’s ace pitcher from a year ago, Ava Tillman, is back for her junior season and she has led Cedartown to a 6-2 start.

“They’re a well-coached team, and they do things the right way,” Summerlin said. “We’ll come back to work and see how we do.”

OF NOTE: To provide information for the prep roundup, please email lagrangesports@yahoo.com