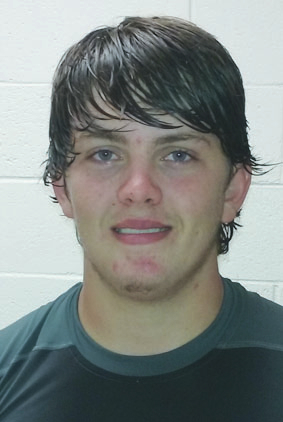 Troup’s offensive linemen get in position during last week’s preseason game against Upson-Lee. Troup has had to replace three offensive linemen from the 2014 team who are now playing college football. Kevin Eckleberry | Daily News

http://lagrangenews.com/wp-content/uploads/sites/37/2015/08/web1_8-26-troup1.jpgTroup’s offensive linemen get in position during last week’s preseason game against Upson-Lee. Troup has had to replace three offensive linemen from the 2014 team who are now playing college football. Kevin Eckleberry | Daily News Senior Jorge Benitez is one of the Troup offensive linemen with a lot of game experience. Kevin Eckleberry | Daily News

http://lagrangenews.com/wp-content/uploads/sites/37/2015/08/web1_8-26-troup5.jpgSenior Jorge Benitez is one of the Troup offensive linemen with a lot of game experience. Kevin Eckleberry | Daily News LAGRANGE – When the Troup Tigers lined up to play the LaGrange Grangers last season, three of the men tasked with providing protection on the line of scrimmage were future college football players.

That included four-year starter and all-state player Mitch Mathes, who is now at Mercer, as well as current LaGrange College teammates Tristan Thompson and Jason Hernandez.

Replacing a trio of players of that caliber is no easy task, but Troup should once again be able to offer a formidable offensive line as a new season kicks off on Friday against the rival Grangers.

Barronton said he and the other players with the most experience playing under the lights on a Friday night have tried to help mold the offensive line into a cohesive unit.

Barronton said it helps that all of the linemen like each other.

“All five of us, and the second team, we get along pretty good,” Barronton said. “We hang out at school and everything. We get along well. You have to.”

Newton said competition for playing time throughout camp and the two preseason games has helped make sure the line will be in good shape by the time the season begins.

“Every single week, we’ve been having open competition for the spots,” Newton said. “One week it’ll be one guy, and the next week it’ll be a different guy.”

Newton said there are a lot of talented linemen, they just lack experience.

“If we train them, they’ll be pretty good,” Newton said.

It’s not a glamarous position, but Barronton said he wouldn’t trade it for anything.

“I love it,” Barronton said. “It’s the best. I wouldn’t want to play any other position.”

Barronton and Newton both said they appreciate the fact that the skill players, the ones who everyone watches as they make the catches, or run the ball, or make the passes, let the linemen know they value what they do.

In last week’s preseason game against Upson-Lee, running back Mess Bonner scored a pair of touchdowns, and he made sure to express his gratitude to the linemen.

“Every time they let us know,” Barronton said. “Mess does especially. Everytime they score they meet us, and let us know. That’s what makes it fun.”

Newton added that “every time Mess scores, he says he loves his offensive line. That gives us that extra to keep going.”

Newton has also played a fair amount on defense over the years, although at the moment he is playing mostly on offense.

“I played a lot of defense last year,” Newton said. “This year they’re kind of pulling me back a little bit. I’m hoping to play a lot more.”

Newton has made his mark on the wrestling mat at Troup as well.

Newton is a two-time state placer who finished fifth in the heavyweight division last season, and he said is goal is to bring home a state championship next year.

For now, all Barronton and Newton and all of the linemen are focused on is finding a way to beat LaGrange for a third straight year.

Barronton is eager for Friday to get here as well, but he said he is looking at the big picture.

“I’m very excited,” he said. “It’s pretty much a game you’re looking forward to the whole year. But it’s just a game. You have the rest of the season to look forward, too. You have to take it one game at a time.”

“Every practice, we’re getting better day by day,” Barronton said. “We just have to stay focused on what we’ve got to do, and just take it practice by practice, and game by game.”