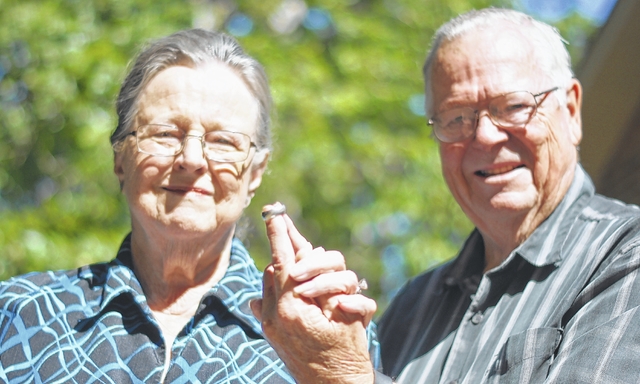 Nina and Ed Lawerence interlock their fingers and extend the ring they lost at their old home in Montgomery, Ala., almost 50 years ago. A neighbor recently returned the ring after digging it up in the garden.

http://lagrangenews.com/wp-content/uploads/sites/37/2015/08/web1_082515RingCMYK1.jpgNina and Ed Lawerence interlock their fingers and extend the ring they lost at their old home in Montgomery, Ala., almost 50 years ago. A neighbor recently returned the ring after digging it up in the garden.

LaGRANGE — Ed Lawrance had his wedding ring returned to him Thursday, 47 years after he lost it.

It was the second time the ring was lost and returned. His wife lost the ring the first time immediately after its purchase.

“My wife lost the package that it was in,” Lawrance said. “She just dropped it on the streets of Montgomery.”

Someone returned the ring to the jewelry store and eventually to the couple.

Several years later, in 1968, Lawrance lost the ring again at the couple’s first house in Montgomery while he was planting roses. It would take 47 years for someone to dig up the ring, contact Lawrance and return it.

The couple met in Montgomery while Lawrance was working with IBM and on a call to the Alabama Teacher’s Retirement office where his future wife, Nina, worked as a secretary. Soon, after she let her interest be known, they were in a two-year courtship.

“It takes me a long time to do anything,” Lawrance said about marrying his wife.

Eventually, the couple married and Lawrance’s job led the family, which now included a 6-month-old son, to move to LaGrange — minus the wedding ring — in 1969. The couple had a house built and over the years, the ring was all but forgotten — that is until last week.

Then the couple was contacted by a lady who had bought their old house in Montgomery. She had found the ring two years earlier, and after talking with neighbors and researching, she was eventually able to tack down its owners — the Lawrances.

“It was something we thought we would never see again and then, all of a sudden, it turns up,” he said.

The couple took the 96-mile trip Thursday to Montgomery to retrieve the ring from their old home.

The woman who found the ring returned it to the Lawrences in a plastic bag, which now contains the ring that replaced the original for the past 47 years, along with a note from the woman who recovered the ring from the dirt where Ed Lawrance planted roses almost five decades ago.

Now the story — and probably the ring itself — will likely be passed down through Lawrance family history.