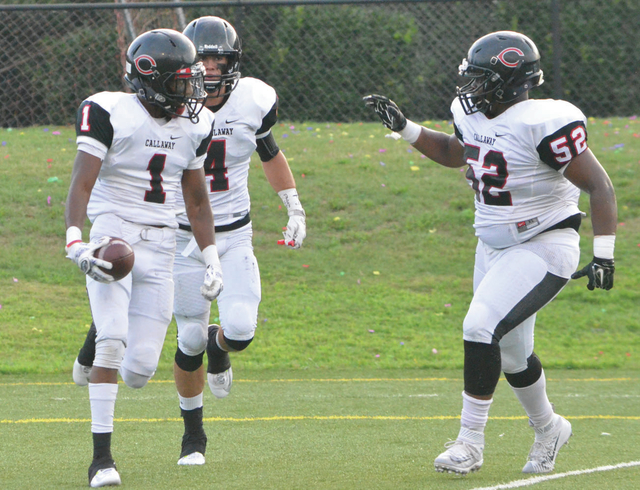 Callaway’s Tyrek Frazier, left, celebrates with his teammates after making an interception against LaGrange last week. Callaway is hoping for a lot of highlights like that in tonight’s game against B.E.S.T. Academy. Kevin Eckleberry | Daily News

http://lagrangenews.com/wp-content/uploads/sites/37/2015/08/web1_8-27-CHS2.jpgCallaway’s Tyrek Frazier, left, celebrates with his teammates after making an interception against LaGrange last week. Callaway is hoping for a lot of highlights like that in tonight’s game against B.E.S.T. Academy. Kevin Eckleberry | Daily News

HOGANSVILLE – The Callaway Cavaliers have displayed a lot of resilience over the years under head coach Pete Wiggins.

Usually when the Cavaliers have had a tough game, they’ve bounced back the following week and delivered a top-notch performance.

The Cavaliers are hoping that proves to be the case when they take the field today to play B.E.S.T. Academy in a non-region game at Callaway Stadium.

Callaway is coming off a season-opening 45-20 loss to LaGrange, and not a whole lot went right.

There were numerous penalties, costly turnovers, and an inability to keep pace with an inspired opponent.

At one point, LaGrange scored 30 consecutive points before Cedric Maynard ripped off a long touchdown run late in the third quarter.

“I talked to the kids, and there are going to be tough games, and adversity, and the biggest thing is how you bounce back from it, and how you finish, and our kids are working and they believe in what we do,” Wiggins said. “And we just have to go out there and play Callaway football and minimize mistakes and hopefully put some points on the board, and hold their offense and keep them out of the end zone.”

B.E.S.T. Academy, which will be making the trip to LaGrange from Atlanta, is a familiar opponent of Callaway’s.

A year ago, in a non-region game, B.E.S.T. Academy hosted a Callaway team that at the time was ranked second in Class AAA.

In a game that started nearly an hour late at Grady Stadium, B.E.S.T scored a late touchdown to win 14-7.

Wiggins is expecting another major challenge from B.E.S.T today.

“Coach (Joshua) Moore does a great job, and he puts a lot of time in,” Wiggins said. “Their kids will be ready to go. They’ve got a good football team. I have a lot of respect for B.E.S.T. Academy.”

For Callaway, there was plenty to work on practice this week.

The Cavaliers were flagged for 22 penalties, they had two safeties, and they committed two costly turnovers.

The Cavaliers lost a fumble on their first play of the second half at their own 5-yard line that led to a LaGrange touchdown.

Later in the half, LaGrange’s Jeremiah Wright returned an interception for a touchdown.

There were some bright spots for Callaway.

Maynard ran for 167 yards on 14 carries, and in his first start at quarterback, Braylon Sanders carried the ball 10 times for 93 yards with a pair of touchdowns.

Defensively, Javoski Leverett was all over the place with 14 tackles.

“I was proud of our kids,” Wiggins said. “I felt like they played hard throughout the game. Obviously the outcome wasn’t what I wanted. I’ll have our kids better prepared this week, and our kids work hard, and they believe we’re going to win.”

LAST WEEK: Callaway lost to LaGrange 45-20; This is the season opener for B.E.S.T. Academy